The 5 Best VPNs for Virginia (Secure, Fast, and Good for Streaming) 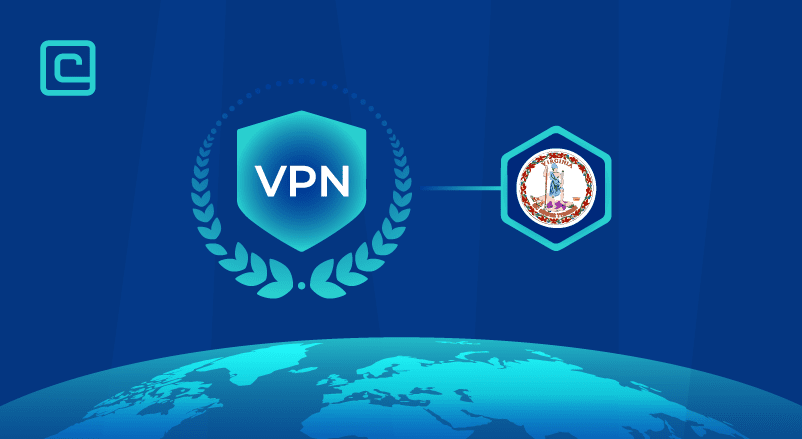 Anyone living in Virginia or outside it stands to benefit from using a VPN. VPNs are excellent online tools that hide your IP address and encrypt your traffic. So you can use a Virginia VPN to access US shows and movies abroad, protect your privacy on public WiFi, and do much more.

But just because a VPN has servers in the US doesn’t mean it’s a good pick. Many providers have poorly-designed apps, slow speeds, and don’t work with streaming sites. But don’t worry — we ran multiple tests and managed to find the best VPNs for Virginia. One of our picks even has servers in Virginia!

So keep reading to see which providers we recommend using.

Here are the best 5 VPNs for Virginia:

The 5 Best VPNs for Virginia

We tested dozens of top VPNs. After hours of research and testing, we found the best 5 VPNs for Virginia:

We think NordVPN is the best VPN for Virginia out there. It has 1,900+ servers in the US, so it’s extremely easy to find a nearby server location. Not to mention you won’t need to worry about dealing with overcrowded servers. Plus, this provider has around 3,300+ other servers in 55+ more countries, so you can pretty much unblock any site you want.

This VPN service is also excellent for streaming and torrenting. In our tests, it always gave us access to popular streaming sites like Netflix US, Hulu, and Amazon Prime US. It also allows P2P traffic on 1,700+ US servers and works with popular P2P apps like qBittorrent and Vuze.

In addition to essential security features, this VPN also comes with a twice-audited no-logs policy. Furthermore, this provider started transitioning to a colocated server network. That means NordVPN uses data centers, but it supplies the hardware. So only this provider’s staff has access to the servers.

And we also like that, with this VPN service, you get tons of extra features:

And NordVPN has very user-friendly apps. It always only took us seconds to find and connect to its US servers.

This provider also has really helpful 24/7 live chat. Its plans are very affordable and it comes with a 30-day money-back guarantee.

HMA VPN is the only VPN on this list that comes with servers in Virginia, so you can use it to get a Virginia IP address. This provider is also really good for streaming — we ran multiple tests and were always able to access Netflix US and HBO Max.

We also like that HMA VPN is very fun to use. Its apps feature an animated donkey that changes costumes whenever you connect to a server. When we connected to the Virginia VPN server, the donkey wore a pirate costume! In addition to that, this provider’s apps have short explanations for all features and are extremely simple to navigate.

We also had really good speeds while using this VPN service. We watched tons of HD videos and they always loaded instantly and never buffered.

What’s more, HMA VPN provides great privacy as its no-logs policy has been independently audited and verified. It also comes with a feature called IP Shuffle — it changes your IP address at specific intervals to better hide your location.

We also like this VPN’s app-based kill switch. When you assign it to an app, HMA VPN will automatically connect to a VPN server when you open said app. So you never risk accidentally torrenting without being fully protected, for example.

This provider comes with good customer support and flexible subscriptions. It also backs all plans with a 30-day money-back guarantee.

Surfshark provides some of the fastest speeds on the market and comes with unlimited connections. So you can actually share the subscription with friends and family — that way, you share the costs and save money.

In our speed tests, all Virginia sites we visited loaded instantly. Also, 4K videos loaded in just 3–4 seconds and didn’t buffer when we skipped through them. And our Skype calls didn’t crash, and we didn’t experience noticeable lag while gaming.

We really like how feature-rich Surfshark is. Alongside essential security features, you also get split-tunneling and double VPN connections. There’s also obfuscation and CleanWeb, which is an excellent ad blocker. And this VPN also has advanced security features like RAM-only servers, meaning every server reset wipes all data. What’s more, this VPN comes with 2 paid add-on services:

Surfshark also works with all the popular US sites and provides excellent torrenting support on its US servers. We also like that its apps are very intuitive, which makes it very simple to get used to them.

With this VPN, you also get excellent support through 24/7 live chat. And its plans are very affordable and all your purchases are backed by a risk-free 30-day money-back guarantee.

AtlasVPN is one of the most affordable VPNs out there, allows unlimited connections, and also comes with a decent free plan. The free plan limits you to 10 GB per month, but that’s enough to test the VPN’s features to see if it’s right for you.

And since this VPN allows unlimited connections, it’s perfect if you have tons of devices or if everyone in your house wants a VPN for Virginia. We actually asked everyone in our office to connect to AtlasVPN’s US servers to test them, and we all had really good online speeds. HD videos loaded in 2–3 seconds and didn’t buffer, and our VoIP calls never dropped or froze.

This VPN service also has some neat security features. We especially like the Data Breach Monitor feature — it lets you check if your email addresses were compromised in a data breach. Besides that, there’s also a Tracker Blocker feature, which stops ad trackers from spying on your traffic.

AtlasVPN also has easy-to-use apps that work on most platforms. And while it lacks 24/7 live chat, it provides responsive and helpful email support.

It’s really easy to upgrade to one of this VPN’s paid plans because they’re very cheap. And we like how each purchase is backed by a 30-day money-back guarantee.

PrivateVPN provides excellent speeds, is great for beginners, and has tons of servers in the US. When we ran speed tests, Virginia news and entertainment sites always loaded in 1–2 seconds. What’s more, we never experienced high ping while gaming and we were able to download large 30–40 GB files in just 20–25 minutes.

We think this VPN is perfect for people new to VPNs because of its extremely user-friendly design. It only took us 1–2 minutes to download and install PrivateVPN’s apps. And thanks to its easy-to-navigate interface, we were able to find and connect to a US server in just 4 seconds. We also really like how all features and settings come with quick, helpful explanations.

PrivateVPN comes with a standard kill switch, but it also has an app-based kill switch. That means you can tell the VPN which apps to shut down if the VPN connection drops. We found it more convenient to just have the VPN shut down our P2P apps when the VPN disconnects than to have it disable our entire online access. And it’s also cool that this VPN comes with obfuscation.

PrivateVPN provides good live chat support, has some of the most affordable plans on the market, and comes with a 30-day refund.

Why Use a VPN for Virginia?

We did the research, and these are the main reasons people want to use a Virginia VPN:

And on top of that, using a VPN is the easiest way to secure your data in Virginia or access US titles abroad. You only need to sign up for a VPN, download and install its app, and connect to a US server.

How to Choose the Best VPN for Virginia

Here are the metrics we used to rank the best Virginia VPNs:

The Best Free VPNs for Virginia

We normally advise against using free VPNs. Most of them are risky to use — they lack essential security features, expose you to malware, and log and sell your data. What’s more, free VPNs tend to have slow speeds, buggy apps, and data caps.

But there are some paid VPNs out there that have good free plans:

But we still think that getting a paid VPN is better — like one of AtlasVPN’s paid plans or NordVPN. Maybe just use the free plan to test the VPN to make sure it’s right for you first.

We tracked down the most common questions people ask about using VPNs for Virginia and answered them here. If you have more questions, just drop us a line in the comments.

What’s the Best VPN for Virginia?

We think NordVPN is the best VPN for Virginia. It has 1,900+ servers in the US, provides blazing-fast speeds, and has excellent streaming and torrenting support. Also, it comes with high-end security and privacy features.

However, if you want to also get a Virginia IP address, we recommend HMA VPN. It’s the only good VPN out there that has servers in Virginia.

And if you’re not just interested in the state of Virginia, but the whole US, we have you covered. Check out our guide to find the best VPN for USA.

Is Using a VPN Legal in Virginia?

Yes, it’s completely legal to use a VPN in Virginia. Doing that only becomes illegal if you use the VPN to engage in criminal activities.

How to Get a Virginia IP Address

Here’s how to get a Virginia IP in just 5 steps:

Can You Use a Free VPN for Virginia?

There are free VPNs out there, but we don’t recommend using them. Free VPNs usually put your privacy at risk. Plus, their apps are glitchy, they don’t provide customer support, they don’t work with streaming sites, and their speeds are very slow.

If you really want to use a free VPN, we recommend you check out AtlasVPN. Its free plan allows unlimited connections, has fast speeds, and is really secure. But it limits you to 10 GB per month and you don’t get P2P and streaming support. To get the full experience, you need to upgrade to one of AtlasVPN’s paid plans — luckily, they’re extremely cheap and are backed by a 30-day refund!

Do You Actually Need a VPN in Virginia?

Yes, here’s why you should use a VPN for Virginia:

Do You Need a VPN for Virginia at Universities?

Yes, it pays off to use a Virginia VPN as a student. It lets you access sites that the network admins block with firewalls. What’s more, a VPN helps you hide your browsing — so that the admins don’t spy on it. And finally, with a VPN, you can hide your torrenting so that you don’t get in trouble.

Can you use a VPN in other States in the US?

Yes, you can use a VPN to get an IP address of the states like California, Texas, New Jersey, or even Hawaii.

To Sum It All Up

Whether you’re in Virginia or outside it, you should definitely use a VPN for Virginia. It helps you unblock US titles on streaming sites, it secures your data, and it prevents bandwidth throttling. We ranked the best Virginia VPNs in our opinion in this article, but we’d also like to hear which VPNs you like the most too.