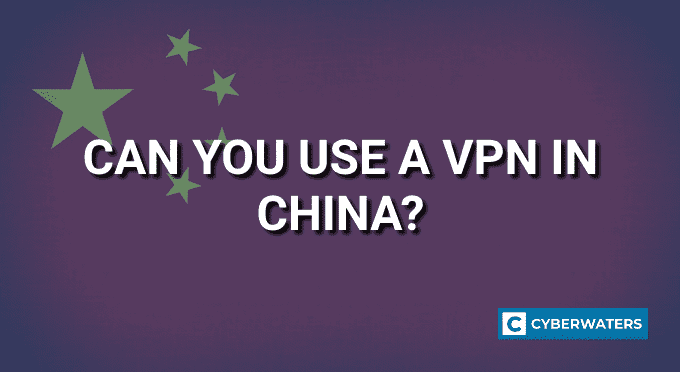 If you’re traveling to China you are probably aware that the most popular websites and apps including Google Search, Gmail, Youtube, Facebook or WhatsApp are blocked there. To enjoy free access to the internet you need a VPN. But can you use a VPN in China? Which VPN still works there in 2021?

These 5 VPNs work best in China:

Can you use a VPN in China

Of course, you can use a VPN in China, however, there might be some legal issues here. Many services are blocked by the Chinese government in order to censor their internet therefore they restrict the use of VPNs in the country and only a few work properly. You can use the technology, but not the way you think.

Are VPNs legal in China

To clarify how you can use a VPN in china we need to clarify the legal status of it. First of all, VPN as a technology is not illegal. Many businesses use this tech to connect to the office remotely and protect their data from third parties, therefore such site-to-site connections are allowed.

Not all VPNs are legal to use for businesses – only the government-approved ones are permitted, but this VPN crackdown1 raised big privacy concerns since the trading secrets and documents of the companies were at risk of being spied on.

But what about using a VPN for personal use?

Using a consumer-based VPN to access websites and use apps outside of the Great Chinese Firewall is also not illegal, but rather a grey area. In 2017 Bloomberg reported2 that the Chinese government asked major telecommunication companies to start blocking consumer-focused foreign Virtual Private Networks.

The authorities also stated that the foreign apps and services that do not comply with the regulations must be removed from the Apple and Google app stores and the websites that sell such services to consumers must be blocked. GreenVPN, which was one of the biggest VPN services operating in China was forced to shut down and end its business.

Due to the wish of the Chinese government to control the internet and restrict access to information, it is not allowed to:

Even though consumer-based VPNs are being blocked and the use of them is a grey area, it all ends up what you do with them and the consequences depend on that.

What is the punishment for using VPN in China

There were few examples of punishments that happened regarding VPNs:

But what if you neither operate or sell any VPNs?

There is a small risk of being arrested for using a VPN in China, but the measures taken are very unclear. Here are a few examples, of what can you expect if you’re caught using one:

In recent years China has become more strict towards the personal use of VPN in order to censor and keep the citizens from external information. However, the fines or punishments are rare for foreigners and expats and only a few are reported. Many people still use VPNs to access their Gmail or Youtube, but due to active blocking not all of the work that good.

Which VPNs work in China?

Out of so many VPNs, a few work well in China. Due to active blocking by sophisticated algorithms that constantly interrupt the service, it is not easy to bypass the Great Firewall. Many available providers have various speeds when connected to VPN servers, but few of them stand out:

This one of the well-rounded VPN providers on the market with its obfuscation feature that claims to be working in China. Many Redditors tried using this service in China and managed successfully to connect to these obfuscated servers and unblock restricted content.

Like for many VPNs, the feedback on the speeds in China was unstable – sometimes people managed to get decent speeds while connected to Japan or Singapore servers, some reported a completely throttled and impossible-to-use internet connection.

NordVPN is a well known and reputable VPN service that also has it’s CyberSec feature that protects from malware and can block ads and trackers. Great security features with next-generation encryption together with IP, DNS and killswitch make it worth trying.

This service is also one of the few that can unblock Netflix and other streaming services.

It has a strict no-log policy and one of the largest server networks (5600+ servers in 59+ countries) and DoubleVPN feature for additional security.

NordVPN also supports up to 6 devices at once and gives a 30-day money-back guarantee on all its plans.

PrivateVPN is one of the safest and most reliable VPN services for unblocking content and accessing geo-restricted sites worldwide. What makes PrivateVPN particularly great in this context is that it comes with a convenient Stealth VPN feature.

The Stealth VPN option allows you to bypass VPN blocks and stringent firewalls by disguising your VPN traffic as regular traffic. Stealth VPN has proven to be extremely powerful in unblocking restrictive regions and very reliable in bypassing the Great Firewall of China.

It offers above-average connection speeds and a handful of features that ensure your actual location never becomes known. These include IPv6 leak protection, DNS leak protection, and an application guard. Additionally, it has an advanced kill switch that automatically cuts off your network in case of any connection drops.

PrivateVPN has created apps for all major OS platforms and allows you to connect up to six devices simultaneously. Better yet, it comes with best-in-class security and encryption, keeping you private and safe from any private eyes when using it in China.

This VPN provider has been a market leader and has been able to bypass internet censorship in China. Reported by many Redditors and other reviewers this service so far is the best one to unblock content from this communist country.

ExpressVPN has over 160 locations and 3000+ servers and supports multiple protocols such as OpenVPN, L2TP or IKEv2 that help to bypass the censorship. Great strong AES-256 bit key encryption and additional IPv6, DNS and WebRTC leak protection features along an internet kill switch make it the best choice.

As most of the VPNs from China experience radically slow speeds, this service has the most reliable connections and does not require any additional settings to be used. You can connect to any server as usual and be able to access Facebook, WhatsApp, Gmail, and other websites again.

This service has a strict no-logs policy and the possibility to pay with Bitcoin for extra privacy. All it’s plans come with a 30-day money-back guarantee and support up to 5 devices at once.

Make sure you set up this VPN  on all your devices before going to China, because, as expected, the original website is blocked there as well.

This Switzerland based service can unblock any websites with its Chameleon technology that is specifically designed to bypass Deep Packet Inspection in restricted countries such as China, Turkey or UAE. Not only can it bypass any censorship but it also masks your VPN traffic so that it is less noticeable.

VyprVPN is one of the best choices when traveling to China. All its 700+ servers have great speeds, especially when connected from restricted countries where connections are throttled.

Its security is great with AES-256 bit encryption and OpenVPN, IKEv2 or L2TP/IPsec protocols. This service was one of the first ones to do a public audit and proved that it’s a no-log policy VPN.

This provider supports up to 5 simultaneous connections and offers great plans with a 30-day money-back guarantee.

PureVPN is just one of the few VPNs that also has its server inside China. It is rare for a VPN to have such servers since if the government finds out they would be immediately shut down. Not only you can connect to China, but this provider works there too.

It uses an SSTP protocol that utilizes port 443 and is suitable to bypass the Great Firewall. Besides this PureVPN has great security and encryption with multiprotocol support (OpenVPN, IKev2/IPSec, L2TP).

This VPN service is capable of unblocking streaming services such as Netflix too, however, the speeds from China are not impressive.

All PureVPN’s plans are very affordable and have a 31-day money-back guarantee to try it.

The usage of consumer-based VPNs is a grey area in China. They are blocked by the main telecommunication companies, but you still can use them with caution. Very few VPNs still work there and constantly face challenges to keep their service running due to evolving Firewall technologies. It is best to install a few VPNs before going to China because getting one there would be really hard.