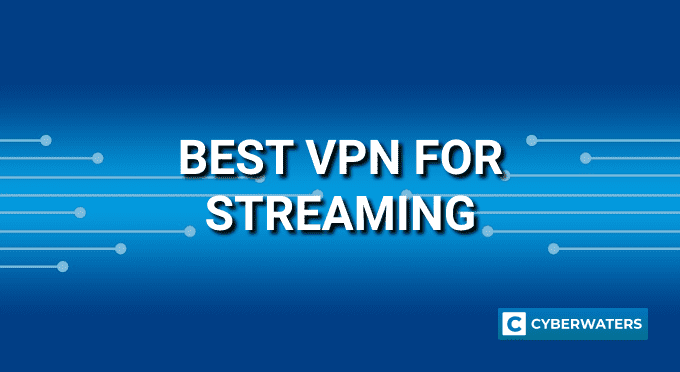 Today we entertain ourselves by watching movies on Netflix or Hulu, streaming gaming videos on Twitch or just listening to your favorite album on Spotify. But sometimes the quality of a connection is throttled by your ISP, or maybe the content you want is not available in your country – here’s why VPN is the best way to securely use all those services. But which is the best VPN for streaming?

How to choose the best VPN for streaming

When choosing a VPN for streaming, there are few features you would want to look for. It’s not only streaming that’s important but your privacy and security as well. It’s a good idea to pick the one that not only works with most online entertainment platforms but its features go beyond that.

Short on time?
Here are the best VPNs for streaming in 2021:

High speeds: A VPN that has high speeds on all its servers and is capable of streaming HD video content is essential. The quality video and no-buffering when watching movies is what makes a VPN great in the first place.

Large server network: a large server network impacts your bandwidth and quality of service. The more different locations there are available the more content you can unblock. A large network ensures that you have enough bandwidth that can stream 4K HD resolution videos.

Unblocks Netflix, Hulu & more: the best VPNs are capable of unblocking the most popular streaming services such as Netflix and Hulu. It should work well with Twitch and Spotify too.

Logging policy: a strict no-logging policy is very important. It not only adds a layer of privacy but also ensures that no outsiders can get your data about your connections and websites visited.

Internet kill switch: an advanced VPN feature that also protects leaking your IP address this way preventing websites knowing where you are located and ensuring that your content is constantly unblocked and privacy ensured.

A quick recap on what to look for in a VPN for streaming:

Best VPN for Streaming in 2021

NordVPN is a well-rounded service which is one of the leaders in the VPN market. Due to its high speeds on more than 5800+ servers in 59+ countries makes it one of the best choices for streaming movies.

This service is capable of unblocking Netflix, Hulu and even more, however, a small inconvenience, sometimes you might ask customer support (which works 24/7) for the right server to connect as not all of them are optimized. Despite that fact, this provider can access all Netflix libraries around the globe.

NordVPN has a strict no-log policy which was audited by an independent IT security audit company PWC. Together with next-generation and AES-256, this is one of the most secure VPNs.

Advanced features definitely include an internet kill switch and a CyberSec feature that can block ads and malicious websites.

This provider also works on Amazon Fire Stick, Android TV and, for lightweight streaming it has an easy to use, smooth UI browser extensions for Chrome and Firefox.

All NordVPN’s plans come with a 30-day money-back guarantee.

SurfShark is a fresh VPN on the market which has proven its value as a newcomer by providing unlimited devices to use with their services as well as great speed when streaming on all of its 1000+ servers in 61+ countries.

It is capable of unblocking Netflix, Hulu and other video platforms from anywhere. The service supports Fire TV, Apple TV and even gaming consoles such as Xbox and Playstation.

No logging policy and advanced features such as ad-blocker, Whitelister and, of course, an internet kill switch to protect you from leaks.

SurfShark uses an industry-standard AES-256 key bit encryption as well as supports the IKEv2 protocol on some of its apps.

It’s a feature-packed VPN service that is surprisingly cheap – you could get it as low as 1,99/m USD (or 1,88 EUR/m) and it includes a 30-day money-back guarantee on all its plans.

ExpressVPN is the best VPN for streaming at the moment due to its amazing speeds and capability to watch high HD quality videos without any buffering.

It has spread its server network in more than 64+ countries in 160+ locations and is able to unblock all most popular movie streaming services such as Netflix, Hulu, BBC iPlayer and others.

Due to its DDoS protection, it’s also possible to stream your own Twitch videos without any problems.

ExpressVPN has a strict no-log policy that keeps all your data private. It supports up to 5 devices. No matter what platform you use it works on all – Win, Mac, Android, iOS. Amazon Fire Stick, Android TV, Apple TV and even more smart TVs are supported.

If you’re looking for a lightweight easy and private streaming you can use VPN browser extensions that are available for Chrome and Firefox.

When it comes to security it’s the most technically advanced VPN on the market and uses industry-standard AES-256 key bit encryption and has an internet kill switch to protect you from leaking your IP address.

All ExpressVPN plans come with a 30-day money-back guarantee.

CyberGhost has probably the largest server network all around the globe with more than 5900+ servers in 89+ countries. It has dedicated streaming optimized servers that work with Netflix and other services.

Good performing servers are capable of streaming high-definition videos and movies on all its apps that work also on Amazon FireStick, Android TV, AppleTV, and other SmartTV devices.

This VPN provider is based in Romania which is a good jurisdiction for keeping no logs. Among privacy features it does have IP and DNS leak protection and internet kill switch as well.

Additional features include ad-blocking and malware protection which you can use on 7 devices simultaneously.

CyberGhost has probably the longest 45-day money-back guarantee in the industry on all its very affordable plans.

VyprVPN’s 700+ servers with more than 200k unique IP addresses are able to unblock streaming services in the United States and the United Kingdom. It works with Netflix, Amazon Prime, HBO, and multiple sports and game streaming platforms.

It also supports Android TV and 5 simultaneous connections are allowed to use on apps that work on Windows, Mac, Android, and iOS.

This service has its unique Chameleon feature that can mask the visibility that a VPN is used, which is extremely helpful when circumventing censorship in restricted areas.

Good speeds on all servers and unlimited bandwidth for watching movies or sports.

This provider uses an industry-standard AES-256 bit key encryption and has a kill switch too.

All VyprVPN plans come with a 30-day money-back guarantee.

Why use a VPN for streaming?

There are a few reasons why you would want to use a VPN for streaming. First, due to copyright agreements, a lot of quality content is not available in every location. This geo-blocking is implemented by many streaming platforms such as Netflix, Hulu, and even Youtube. With a VPN you will be able to access all libraries from anywhere.

Second, your ISP might throttle your connections when accessing certain services and websites. With a VPN you would hide the websites you visit and all your internet activity online this way preventing your ISP from reducing the bandwidth when streaming videos.

Third, in case you play games, it would protect from DDoS attacks making not only your stream secure and smooth but also would prevent lag and even increase ping.

A quick recap – it’s best to use VPN for streaming because:

How to use Netflix with VPN

It is very easy to watch Netflix with VPN and unblock all content. Here’s how:

Does a VPN improve streaming?

Using a VPN can make a streaming quality better in certain aspects. First, it can bypass your ISP’s throttling when accessing certain services such as Netflix and improving the connection speed. It can unblock restricted content in your country as well as protect from DDoS attacks when streaming games.

A VPN can indeed make your videos buffer and stream faster in certain situations. It is especially noticeable when an ISP reduces the bandwidth when watching online videos. With VPN you can bypass throttling which greatly improves the quality of the service.

Which Is the Fastest VPN Protocol for Streaming

When watching online videos it is important to keep a balance between speed and security. UDP based protocols are faster and usually, they are used by default in most VPN clients. For the strongest security it’s best to use an OpenVPN protocol, however, the fastest and very insecure protocol for streaming would be PPTP.

When it comes to choosing a VPN service for online entertainment, its not only best to look for the one which is cable to bypass geo-filtering but also keeps your connections secure and private. Look for great speeds as it will greatly increase the quality of streaming and reduce the buffering time as well as protection features such as internet kill switch. If you want some additional features such as ad-blocking, Fire TV or Apple TV support there are some VPNs that do that all too.