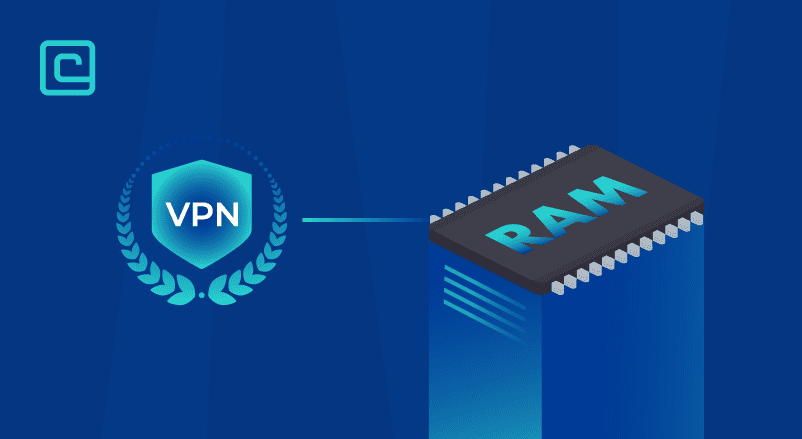 When it comes to VPNs and privacy, you are not always 100% sure if your chosen provider truly does not keep any logs. Any data that is stored on a server might lead to identifying users up to some extent. Luckily, for those who value privacy more than anything, a VPN with RAM-disk servers is the best choice. However, only very few VPN providers offer this ultimate privacy feature. So, which VPNs run their servers on RAM? Why is it important for privacy?

First, let’s take a look, what RAM memory is and what’s so special about it.

These are the best VPNs with RAM-only servers:

Random Access Memory is a type of computer memory that can read or write data in the same amount of time in any order. It is also called short-term or volatile memory since all the data is deleted once the power is cut off.

RAM is an essential part of any device such as PCs, mobile phones, routers, and even VPN servers. It stores the data that is currently being used such as running apps, background processes, and so on. RAM is more than 100 times faster than the fastest SSD hard drive, but it can store 100 times less data.

What Are RAM-Only VPN Servers?

RAM-only servers rely on RAM modules instead of hard drives. The code and operational data needed for the VPN to run are stored on the RAM modules. When a RAM-only server boots up, it runs a read-only image that contains the operating system and any other necessary software.

Because there is no hard drive, every process involved in running the VPN takes place in the RAM module. RAM is volatile memory, so any stored data is wiped if the server is shut off or rebooted.

Here are the main reasons why some top VPNs have transitioned to using RAM-only VPN servers:

When it comes to privacy, running a VPN server fully on RAM is the safest and most private way to ensure no logging could be done. RAM-disk servers utilize the memory’s volatility, meaning that anytime the VPN server is restarted all the data that was stored on the server is completely wiped off and gone forever.

Running VPN software on volatile memory makes storing logs impossible. In case of any accidental data leaks, RAM only servers ensure that no logs could not end up somewhere on the hard drive.

This unique privacy-focused feature is extremely helpful in case a VPN server is seized. Government officials usually physically take the hardware for investigation, which means cutting off the power. With VPN RAM servers all the data would be gone in case such an event occurs.

There are currently only a few VPN companies that actually implemented this technology to protect your privacy.

RAM modules are generally faster than hard disk drives and even SSDs. A RAM-only VPN server is more likely to provide faster speeds than servers that write data to the hard drive, for example.

To the end users, this means they get better performance if the VPN provider uses RAM servers. They’ll have faster connection times and speeds for browsing, gaming, streaming, torrenting, and more.

It generally takes less time for VPN service providers to deploy RAM-only servers, especially if they are using virtual servers. This saves the provider time and money and also offers its users a better experience.

For example, let’s say a VPN provider sees that a large number of users are connecting to servers in a specific country. With RAM-only VPN servers, they can quickly deploy new servers in that location. That way, the VPN users won’t be affected by overcrowded servers, which slow down speeds.

NordVPN changed its server infrastructure to be RAM-only in 2020. Besides that, it started transitioning to a co-located network. That means it ships its own hardware to data centers. That way, only this VPN provider’s staff has access to the NordVPN RAM servers, so nobody can physically tamper with them.

One thing worth mentioning is that the provider is based in Panama. The jurisdiction has no mandatory data retention laws, which goes hand in hand with their RAM server infrastructure.

Also, this provider has high-end security. It has an automatic kill switch that can shut off your Internet (or specific apps) whenever the VPN connection drops.

They also have a twice-audited no-logs policy and secure protocols like NordLynx and OpenVPN. There’s also DNS, WebRTC and IP leak protection, an ad-blocker, double VPN, and obfuscated servers.

NordVPN has 5,500+ servers in 60 countries, so it’s easy to find a nearby server to get fast speeds. It also supports P2P traffic on 4,500+ servers and unblocks the most popular streaming sites like Netflix, Amazon Prime, BBC iPlayer, and more. And this VPN service allows up to six devices on one account and has easy-to-use apps for all platforms.

All NordVPN plans come with a 30-day money-back guarantee.

Surfshark upgraded their network infrastructure to RAM-only servers in July 2020. It has over 3200 servers in 100 countries and a strict no-logs policy. Their server infrastructure and browser extensions have been independently audited as well.

This VPN uses AES-256 encryption and has no IP or DNS leaks. It works with protocols like WireGuard, Shadowsocks, OpenVPN, and IKEv2/IPSec. Their apps include an internet kill switch too. It also has GPS spoofing on Android, a unique feature among the RAM-only VPNs on our list.

Surfshark fully supports P2P traffic and can unblock Netflix and other streaming services. You get unlimited bandwidth for downloading files and watching online movies. This means there’s no video buffering and you can count on reliable connections for torrenting.

VPN apps are available for all platforms and have quite a lot of features. These features include an ad blocker, split tunneling, and unlimited simultaneous connections.

Surfshark has a 30-day money-back guarantee on all its plans.

ExpressVPN RAM-only servers are some of the best. This VPN made innovative engineering efforts to develop its TrustedServer technology. Not only do all its servers run on RAM-disk only, but also the entire software stack is reinstalled on every server at startup.

This is essentially a clean server configuration on every reboot to prevent errors, malicious code insertion by rogue employees, and similar threats. Their TrustedServer technology oversees the entire server management process. That way, the possibility of accidental errors is minimized.

ExpressVPN periodically restarts and updates its servers this way ensuring the privacy of its users. Their technology and logging were also independently audited by the well-known auditing firm PwC, which has proven that its no-log claims are true.

The service so far is one of the best in the industry and allows torrenting, can unblock Netflix, has amazing speeds, and has best-in-class encryption along with an Internet kill switch.

This service is indeed for those who care about privacy. ExpressVPN offers a 30-day money-back guarantee on all its plans for you to try.

Private Internet Access upgraded its server infrastructure and now utilizes RAM-only servers in 2020. On top of that, it took even more measures to upgrade its VPN security. Data center employees no longer handled the server setup. Instead, PIA installed its own encrypted operating system.

Also, it upgraded the secure connections to and from its servers to offer protection against MITM attacks. And this provider made sure the servers use up-to-date software to be safe from security flaws.

With this VPN, you get very good security. It has good leak protection, a kill switch, and powerful encryption. It also uses OpenVPN and WireGuard, offers obfuscation, and has a good ad blocker.

Their no-logs claims have been proven true many times in court. There’s also a tool that lets you check if your email was compromised in a data breach.

This provider has thousands of servers in 80+ countries. All servers have been upgraded to use faster network cards, so you always get smooth browsing, streaming, and torrenting.

You get P2P traffic on all servers and can unblock popular streaming sites. Also, you get ten simultaneous connections with one account and intuitive apps on all platforms.

All PIA’s plans are backed by a 30-day money-back guarantee.

All of CyberGhost VPN’s servers run on RAM memory. This provider also offers NoSpy servers – they offer top-notch security and very fast speeds. The NoSpy servers have extended bandwidth and a dedicated uplink, and they’re built and operated by this provider’s staff.

With this VPN service, you get great security. It has an always-on kill switch that prevents accidental traffic leaks. Also, it has strong encryption, a no-logs policy, secure protocols like WireGuard and OpenVPN, and good leak protection. Their VPN service has also undergone an independent audit by Deloitte.

And you get fast speeds on their extensive network of 9000+ servers in 90+ countries. There are tons of dedicated P2P servers and dozens of streaming servers.

These specialized servers refresh their IPs more often, so sites like Netflix can’t detect and block them. CyberGhost VPN allows seven simultaneous connections and offers user-friendly apps for all devices.

For long-term plans, CyberGhost VPN has a generous 45-day money-back guarantee. Monthly plans are covered by a 14-day refund.

Absolutely. For one, the fact that the server OS and software runs from a read-only image makes it difficult to tamper with.

Of course, you need to use a top RAM-only VPN for the best results. To keep you safe, it must have industry-standard security features. That includes military-grade encryption to make your data unreadable.

Then you need a kill switch to protect you from data leaks in case the VPN connection drops. Also, the RAM-only VPN needs a strict no-logs policy to ensure it won’t store your browsing activity.

Can RAM-Only VPNs Be Hacked?

Hackers could target any VPN with cyber attacks. However, it would be particularly difficult for cybercriminals to compromise RAM-only servers.

That’s because it’s almost impossible for a malicious actor to install backdoors on a RAM-only server. The same goes for gaining access to its server configurations, or any private keys that would be stored on an HDD.

What’s more, RAM-only servers generally have various security procedures configured on them. For example, if hackers try to maliciously access the servers, these procedures could reboot the servers remotely. And as we’ve explained before, the process wipes any and all sensitive data.

RAM-disk servers are the ultimate privacy feature that very few VPN services currently have. Unlike VPNs with HDD-based servers, the services above never store data on hard drives, thus protecting your privacy.

NordVPN RAM-only servers are the best implementation in the industry so far, and the service itself is robust and reliable. Currently, only a few more VPN providers offer this feature so there’s not much choice if you want to stay 100% private.