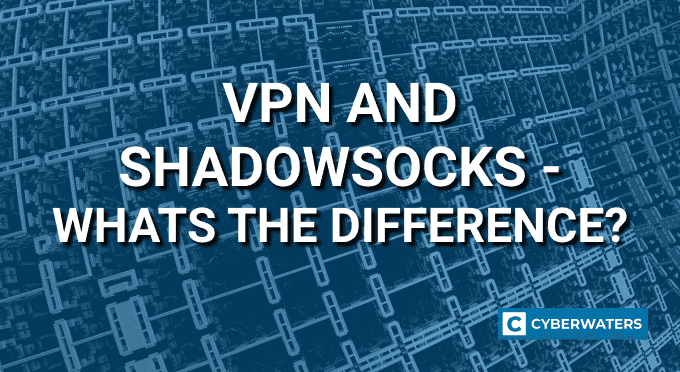 More often, people mistake Shadowsocks for VPN-based technology. Although the two have overlapping functions, they are significantly different technologies.

Read more to understand the differences and similarities between VPNs and Shadowsocks. The write-up also features information about the benefits and use cases of the two technologies.

A virtual private network (VPN) is a networking architecture that users implement over a public network to enhance privacy. The technology creates a separate network from a public internet connection to give users online privacy and anonymity. In other words, VPNs mask a device’s internet protocol (IP) address, making online actions untraceable.

Shadowsocks is an open-source SOCKS5-based project designed to bypass censorship. A Chinese programmer first released Shadowsocks in 2012 as an underground tool to circumvent content geo restrictions in China. However, the developer announced they were retiring from the initiative because of the pressure from the Chinese authorities in 2015.

Josh Horwitz and Nikhil Sonnad wrote that the Chinese authorities deepened a crackdown on virtual private networks (VPNs) and other tools like Shadowsocks. Accordingly, Apple removed VPN and Shadowsocks apps from its Chinese app store, depriving many citizens of tools that are handy in circumventing the country’s Great Firewall. On the scale of Internet freedom (the right to Internet access and having digital freedom), China scored the lowest with 10 percent.

As luck would have it, a range of contributors has incessantly maintained and improved the open-source technology from that moment on. Despite the government’s effort to end Shadowsock’s spread, the tool is likely to remain elusive to suppress. Employees at some of the largest tech companies collaborate to maintain the software’s code and developers have added third-party apps with custom features to run Shadowsocks.

Shadowsocks is based on proxying technology that grew popular in China after the inception of the Great Firewall. Users would circumvent the firewall by first linking to a separate device called a proxy server. The setup routes all the traffic through the proxy server located in a different location, allowing the user to connect to otherwise blocked websites freely.

As the Great Firewall became more prevalent, it turned out challenging to use proxy servers to connect to restricted sites. The tool can identify and block traffic on peculiar routes. For that reason, coders developed Shadowsocks that uses SOCKS5 open-source internet protocol to create an encrypted connection between the Shadowsocks client on a local computer and the one running on the proxy server.

Shadowsocks requires a virtual private server (VPS) where users connect their computer terminals and the software’s code. The system uses a Shadowsocks client app (free or paid) to input the server location and password to access and browse the Internet without restrictions.

Shadowsocks is a free, open-source software optimized for multiple computing environments, including mobile devices and wireless networks. Besides, the tool is available for most platforms, including Windows, Linux, Mac, Android, iOS, and OpenWRT.

Shadowsocks worldwide community devotes to deliver bug-free code and long-term support. Since its inception, the tool has quickly become transparent to various platforms and languages, with a rising number of users. Several businesses, including Google, are specializing in developing apps and APIS based on Shadowsocks services.

How are Shadowsocks and VPN Similar?

Forty-three percent of people globally feel they lack control over their personal data, forcing them to explore tools to achieve anonymity. In fact, 80 percent of Chinese citizens and Americans are concerned about their governments spying on them. More than 91 percent of Americans believe they have lost control over the ways their data is collected and used.

Much like Shadowsocks, VPNs also reroute and encrypt data to give privacy and anonymity. Both technologies connect users to certain websites that governments restrict through geo-blocks and authority censorship—a VPN solution changes users’ public IP address to bypass geo-restrictions. VPNs and Shadowsocks are compatible with multiple platforms, including mobile devices and wireless networks.

How is Shadowsocks different from a VPN?

Shadowsocks is ‘Distributed,’ VPN is ‘Centralized’

How are the two technologies different? Unlike the highly decentralized Shadowsocks, VPNs are extensive centralized services. The architecture, consequently, makes it easy for government authorities to detect and block traffic from VPN service providers. To date, there is no evidence that any security appliance, including the Great Firewall, can identify and stop Shadowsocks.

Shadowsocks software can selectively disguise a specified part of the user’s online traffic, with other parts remaining as regular traffic as if proxy technology is not running in the background. By any chance, using Shadowsocks requires the user to configure a program to use the proxy. For instance, you configure your chrome browser to forward traffic through a proxy. After that, the proxy only works for this program, with the rest of the applications operating normally. This setup is helpful if the user still wants to visit some sites in a location with Internet restrictions. You can set Shadowsocks to disguise their details only when connecting to blocked sites, so they can flexibly switch to other sites without turning off the tool

In contrast, VPN services make servers assume that a client is outside of the region, hence blocking all requests to local content. Users run VPN tools inside the systems, and all programs work with it. Unlike Shadowsocks that only allows you to transfer TCP and UDP data through a proxy, VPNs accept any kind of traffic automatically from all programs in a system.

VPNs Rely on popular Internet protocols that instruct digital devices on how to talk to each other over the web. Meanwhile, firewall censors deploy advanced machine learning (ML) to match fingerprints that detect traffic from VPNs using the protocols. For instance, primary streaming services like Netflix use VPN blockers that limit the choice of VPNs that can access the sites.

The ML detection method, on the other hand, is not effective in the less centralized Shadowsocks technology. Shadowsocks allows each user to configure the setup, meaning that the technology’s community is not using the same protocol. Simply put, each Shadowsocks user customizes their content and creates their own proxy connection that looks different from the outside. Identifying traffic in this architecture is difficult for any security apparatus.

By their very nature, developers created Shadowsocks as a for-coders by-coders tool. However, some nonprofessional programmers in China now use the software to access sites like YouTube and Vimeo, both blocked in the country. Google Jigsaw released Outline, a Shadowsocks-based tool that simplifies setting up Shadowsocks even without the knowledge of command-line. Outline deploys Shadowsocks servers on multiple cloud service providers, including Rackspace, Digital Ocean, Amazon EC2, and Google Cloud Platform. While Shadowsocks is a powerful software for bypassing website restrictions, it has a limited functionality beyond that. For instance, the developers have not optimized the tool for enhancing users’ online security.

VPNs, contrarily, have an advantage in reaching many users, making it profitable business-wise. VPN offers a higher level of security that Internet use demands. For instance, users can deploy the tool to browse securely using public Wi-Fi hotspots. Besides, VPNs keep an online identity hidden from ISP-related issues such as data logging and monitoring. The sheer number of VPN vendors is proof enough of the tool’s value. However, since not all VPNs are perfect, users should research to ensure they make the right choice before installation.

VPNs deploy several layers of military-grade encryption protocols to hide information in servers. In contrast, Shadowsocks is a lightweight software that makes data blank to look more like HTTPS to disguise online activities. Shadowsocks uses SOCKS5 proxies that work with multiple TCP connections to send traffic, making it much faster and challenging to detect. The software neither encrypts data like a VPN, nor does it forward all requests through a specific server. Instead, it uses HTTPS and SOCKS5 protocols to hide some of the users’ traffic, which it routes through a server to hide online actions from an ISP. In essence, Shadowsocks encrypts the traffic it forwards through the ‘proxy’ server, which is merely limited to TCP and UDP data packets.

Shadowsocks is entirely open-source and free. The software has an extensive community of programmers and testers dedicated to offering incessant maintenance and support. In contrast, running a reliable VPN service that includes a global server network, user support, and client apps integration is not free. VPN service providers are businesses earning revenues from product subscriptions. If you think the price of a VPN solution is higher than your budget, Shadowsocks is a good alternative for specific use cases, such as circumventing government censorship, but not providing improved privacy and security.

Shadowsocks and VPN Use Cases

Programmers develop and maintain Shadowsocks to circumvent censorship and enhance privacy. The software utilizes HTTPs to disguise traffic so that requests can move past censorships policies and procedures.

Conversely, people deploy VPN technology to establish secure inter-network links. The tool encrypts data and prevents intruders from accessing it during transmission. VPN is a conventional and indisputable cybersecurity solution that vendors create, document, distribute, and support to help businesses and individuals to protect their identities online while erasing their digital footprint.

Surfshark is a VPN service with Shadowsocks. It allows selecting this protocol in all its apps. It helps to circumvent censorship and unblock websites. Surfshark does not keep any logs when using Shadowsocks or any other protocol. It’s easy to use and has extra security features like Internet Kill Switch, IP and DNS leak protections.

It supports split tunneling, P2P traffic and can unblock Netflix from anywhere. It has more than 1700+ fast servers in 60+ countries. The VPN can also block malicious websites and intrusive online ads.

Surfshark offers a 30-day money-back guarantee on all its plans.

More on VPN with Shadowsocks

Innovative users can integrate VPN and Shadowsocks to leverage the benefits the two technologies offer, such as speed, security, and anonymity. You can first set up Shadowsocks to sidestep blockers like the Great Firewall and access the Internet without limitation. Subsequently, you can install a VPN as a digital security appliance to encode information and re-course the traffic through protected servers to alleviate cyber-attacks. In that way, the integrated architecture ensures that the ISP, government authorities, or any other outsider cannot perceive what you are doing on the Internet by any means. Besides, cybercriminals cannot steal confidential information from your systems or networks, whether at rest or in transit.

Ultimately, Shadowsocks is a robust tool for sidestepping digital censorship. The technology has gained popularity, especially in countries where Internet control is a significant issue. Despite the authorities’ efforts to block the tool, it has continually expanded due to its open-source nature, making it difficult to detect. Meanwhile, VPN remains a more suitable option for businesses and users seeking identity protection, anonymity, and security on the Internet. VPNs function as cybersecurity tools that encrypt data and reroute all traffic through VPN providers’ secure servers.

Reasoning from this fact, Shadowsocks does not focus on your privacy, security, or anonymity. The principal purpose of the tool is to bypass restricted content while working more like a proxy than a VPN. Shadowsocks, unlike VPN, does not encrypt all the user’s data or mask public IP addresses and does not reroute traffic via secure servers.

If you want a VPN, here are some recommendations:

Is Torrenting Illegal? How to Not Get Caught While Torrenting
Tejas Nair