Is It Illegal to Use a VPN for Netflix? Can You Get Banned? 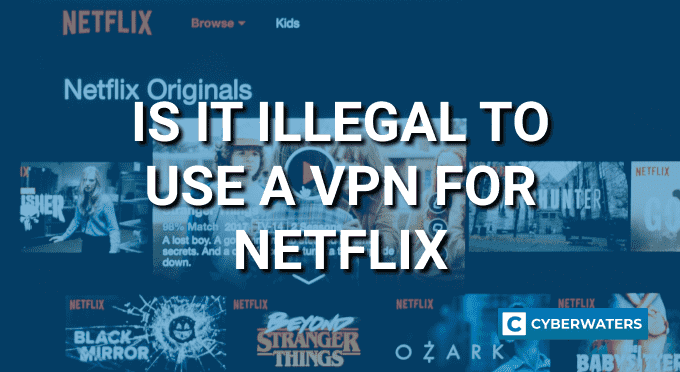 One very popular use of a VPN is to gain access to streaming video content that is not usually available in a certain geographic region. With a quality VPN, users can access content through their servers nearly anywhere in the world. If the movie you want is only available to Netflix viewers in a particular country, you can set your VPN to route your traffic through their server in that country and unlock access to that content.

While this is an effective way to get content you would otherwise miss, many users are left wondering if there are any legal issues with this approach. Is streaming illegal? Can you have your Netflix account banned for using a VPN? Why would Netflix ban VPN users?

Finally, if you are comfortable watching Netflix via VPN, how can you beat a Netflix VPN ban?

Is Watching Netflix Via VPN Illegal?

It is difficult to pin down any specific law that would make watching Netflix via VPN illegal. This is unless you are in a small list of countries such as China and Iran. From most other countries, there is no law against using a VPN, and, if you are a Netflix subscriber, you are certainly not breaking any laws accessing the service.

While the purpose here is not to offer legal advice, there does not appear to be much or any legal risk to the practice. However, that doesn’t mean it is allowed by Netflix.

A more critical question for many streamers is whether or not they can get in trouble with Netflix. Does Netflix ban VPN users? That question is slightly more complicated.

Here is what Netflix says about the matter in their terms of service, section 4:

And a little further down the page:

And later in that same paragraph:

“We may terminate or restrict your use of our service if you violate these Terms of Use or are engaged in illegal or fraudulent use of the service.”

So, the short answer is, yes, circumventing geographic restrictions using a VPN is against the Netflix Terms of Service. They can terminate your account for doing so. But do they? Apparently not.

There are no available reports of Netflix terminating accounts or banning users for accessing geographically restricted content using a VPN. While they may have the right to in their terms of service, the company does not seem to make a practice of it. However, that doesn’t mean that they make it easy.

Instead of canceling accounts or banning users, Netflix just makes it somewhat challenging to stream content via a VPN. The worst consequence most users will ever see is that it doesn’t work. This is because Netflix mostly restricts VPN streaming by blocking VPNs. Netflix tries to discover IP addresses tied to VPNs and then blocks them. Fortunately, there are ways to beat the Netflix VPN ban.

Why Does Netflix Block VPNs?

Since Netflix users pay for access to the service, you may wonder why watching Netflix via VPN is not allowed? It comes down to licensing and copyright. Netflix does own some of its content, such as Netflix Originals. The rest is licensed from content creators and studios. The content owners make deals with streaming providers, broadcast networks, and cable providers worldwide.

The content you want might have been licensed to Netflix in one country, but to a different service in the U.S. Or, maybe no deal has been reached yet for U.S. distribution. In that case, Netflix does not have the license to show that content in the U.S. Therefore, it doesn’t show up as an option for those viewers.

When streamers use a VPN, they can circumvent that geographical limitation and watch the content anyway. Because of this, Netflix makes an agreement with the content creators to help stop people from watching in areas where the content is not licensed.

How to Bypass the Netflix VPN Ban

Many high-quality VPNs now promote their ability to get around VPN bans from Netflix and other services. Here is what to look for in a VPN:

It is not illegal to use a VPN for Netflix. However, Netflix does not allow to use services that can bypass geo-restrictions. The streaming service has the right to ban your account, but there are no cases reported of such activity. It is in the best interest for Netflix to keep all its users subscribed.

Even though Netflix blocks VPN connections, it is still possible to bypass the ban. You should use a VPN that constantly renews its IP addresses and has streaming specific servers.

Here are the best VPNs that work with Netflix: