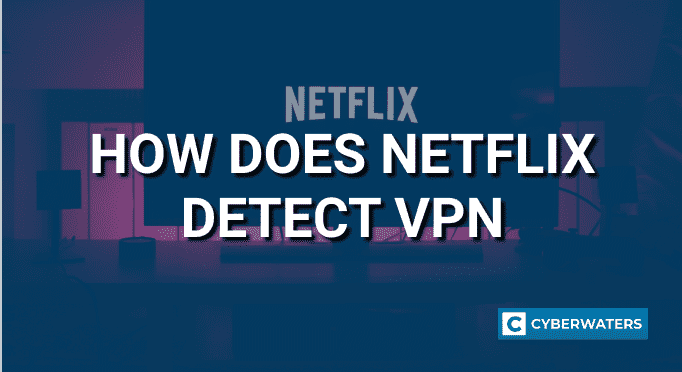 Tons of people use Netflix with a VPN to get access to their favorite shows and movies, especially while traveling abroad. However, not all VPNs work with Netflix, as this site is extremely aggressive when it comes to blocking VPNs.

If you’d like to know why Netflix blocks VPNs, just follow that link to read our article on that topic. In this guide, we’ll instead focus on how Netflix detects VPNs, and how to bypass VPN blocks by making Netflix stop detecting your VPN connection.

How Does Netflix Detect a VPN?

Here’s a quick overview of each detection method:

Netflix likely enlists a service that tracks and provides information about IP addresses, including which ones are associated with VPNs. Once they know which ones belong to VPNs, they can block them. This becomes a problem when users use a service that doesn’t regularly refresh their IP addresses.

When you are using a VPN, you may be using a shared IP address that may be used by quite a few other users. If Netflix sees a lot of traffic coming from the same IP address, they can figure out pretty quickly that it is a VPN and block it. This particular issue becomes a problem for those VPNs that have limited servers and available IP addresses.

While cookies are useful, many of them can actually leak your real location to Netflix when you use a VPN. The site will see that you’re connecting from a country that matches the VPN’s IP address. However, it will also see your device’s cookies, which match your real location. When Netflix detects this issue, it will automatically assume you’re using a VPN, and block you.

A DNS (Domain Name System) leak is when your DNS traffic leaks outside the encrypted VPN tunnel.

If you access Netflix with a VPN that suffers a DNS leak, Netflix will be able to detect your real location. Because your DNS data won’t match your IP data, Netflix will know you’re using a VPN.

For example, let’s say you’re from Germany and use a US VPN server to access the Netflix app on your smartphone. The app will see that your connection request is coming from the US, but it will also see that your phone’s GPS location is in Germany. Due to this mismatch, Netflix will very likely assume you’re using a VPN, and it will block your connection.

What Happens When Netflix Catches You Using a VPN?

When Netflix detects a VPN connection, it will automatically block it. When that happens, you’ll usually see an error message that says you’re using a proxy service or that Netflix can’t find the page you’re looking for. Here’s an example of a Netflix proxy error:

The only way to get rid of the error messages is to disconnect from the VPN and access Netflix again.

In addition to the proxy error messages, Netflix also does 2 other things when it detects a VPN connection:

Can Netflix Ban Me for Using a VPN?

Netflix’s terms of service are pretty vague when it comes to VPNs, but they do hint that using a VPN is against the rules. That said, we have never heard of anyone being banned by Netflix for using a VPN. We were also never banned when we were caught using a VPN with Netflix.

The only thing Netflix will do is display a proxy error message or prevent you from using its platform as long as you’re connected to the VPN.

Is It Illegal to Use a VPN with Netflix?

There are no specific laws out there that make it illegal to use a VPN with Netflix. However, it might be against the law to do this in countries where using a VPN or Netflix is restricted, like China.

How to Bypass Netflix’s VPN Ban

Here’s what you can do to make Netflix stop detecting your VPN connection:

Get a Good VPN That Refreshes Its IPs Often

Some VPNs are better than others when it comes to renewing IP addresses. One way to avoid Netflix from detecting a VPN is to use an IP address that has not yet been identified as a VPN. The best way to accomplish that is to work with a VPN that has a massive number of addresses and is continuously renewing them. Check out the different providers that are suitable for streaming before choosing yours.

Connect to a Different VPN Server

Also, if the VPN has dedicated streaming servers, use them instead of regular VPN servers. Streaming servers usually refresh their IP addresses much faster, so it’s harder for sites like Netflix to detect and block them.

Use a Different Browser

If you use your regular browser to access Netflix with a VPN, your browser’s cookies will likely give away your real location. To solve that issue, we strongly recommend using a separate browser for this. Also, you should use the browser’s incognito/private mode to prevent tracking cookies from leaking your geo-location.

Use a Dedicated IP Addresses

Some VPNs, including NordVPN, can provide you with a dedicated VPN IP address that only you use. They may be available in the region from which you want to stream content. This will get you around many VPN detection methods. Since no one else uses the address, Netflix will have trouble identifying it as a VPN.

Most VPNs that have dedicated IPs offer them for a small price. If you’re on a very tight budget, however, we recommend trying PrivateVPN since it provides access to dedicated IPs for free.

Most VPNs come with DNS leak protection enabled by default, but you should still check the VPN’s settings to see if it’s not turned off. If it is, enable it to prevent DNS leaks from revealing your real location to Netflix.

You can also perform a DNS leak test to see if the VPN is working — here’s how:

Use Netflix’s Site on Mobile

On mobile, we recommend accessing Netflix using your browser apps instead of the Netflix mobile apps. That way, Netflix can’t use GPS data to find your real location when you’re connected to a VPN.

If you insist on using the Netflix mobile app, there is a workaround — but only for Android users. Get a Surfshark subscription, as this VPN has a feature that lets you spoof your GPS data on Android. We tested it multiple times and it always worked with Netflix’ mobile apps.

his provider refreshes its IPs extremely fast, so it can easily avoid getting blocked by Netflix. We ran 20+ leak tests on a single US server, and we always had a different US IP address. In addition to that, NordVPN has 5,000+ servers in 55+ countries, blazing-fast streaming speeds, and easy-to-use apps for all platforms. It’s affordable and backs each purchase with a 30-day money-back guarantee.

This VPN’s Nexus feature regularly refreshes your IP address while you’re connected to a VPN server. So, it’s difficult for streaming sites like Netflix to block this provider’s servers. Surfshark also allows unlimited connections, so it’s a good pick if everyone in your home needs a good Netflix VPN. With this VPN, you also get 3,200+ servers in 90+ countries, fast speeds, cheap plans, and a 30-day money-back guarantee.

This VPN has dedicated streaming servers that refresh their IP addresses very often to avoid detection. In our tests, this VPN always allowed us to access any Netflix library we wanted. Atlas VPN also comes with 700+ servers in 30+ countries, unlimited connections, strong security, and intuitive apps. It has a free plan, but it doesn’t come with streaming support. Fortunately, its paid plans are very affordable and there’s a 30-day money-back guarantee.

The good news is that VPNs are aware of Netflix’s effort to block their connections. The best VPNs are continually working on the problem and even offering tips and advice on connecting to the content you want.