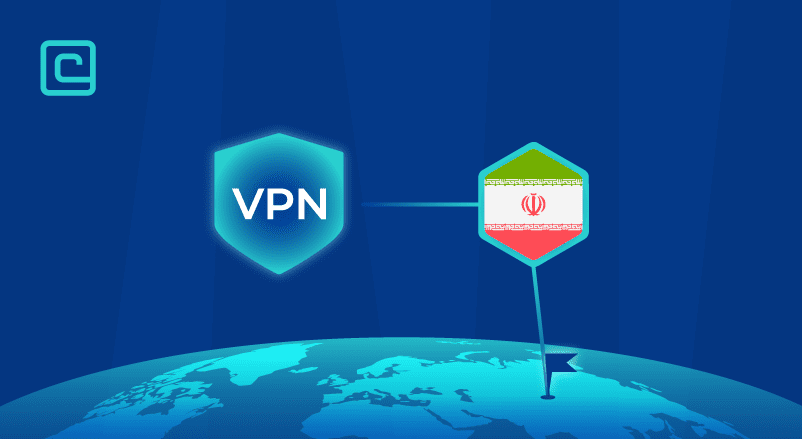 If you are looking for a VPN to use while living or visiting Iran use this guide.

If you want to binge Netflix Iran, use streaming sites that only work in Iran, or use your bank’s site from back home, you’ll need an Iran IP address. The best way to get an Iran IP is to use a VPN that has servers in Iran.

Not many VPNs offer that, though. We checked over 40 VPNs to see which services do and listed them in this article.

How to Pick an Iran IP VPN

Here’s what we pay attention to:

How to Get an Iran IP (4 Quick Steps)

Here’s How to Get an Iran IP:

Our research shows that these are the best options:

CyberGhost VPN has the most Iranian servers – 10+ located in Tehran. They have unlimited bandwidth and support P2P traffic. And we really like that you can use WireGuard with them because it’s a secure and very fast VPN protocol.

CyberGhost VPN’s Iran servers are really fast. Even though we tested the servers from distant locations in Romania, the US, and Japan, the connections were smooth. Netflix HD videos loaded instantly and we downloaded large torrent files of 17-20 GB in 13-14 minutes.

These Iranian servers are virtual locations. The IP is registered in Iran, but the physical server is located in a different country. CyberGhost VPN’s support reps couldn’t tell us where. We ran several ping tests and it looks like the physical servers might be somewhere in Europe since we had the lowest ping from France.

CyberGhost VPN also has user-friendly apps for Windows, macOS, Linux, iOS, and Android. Besides WireGuard, you can use OpenVPN and IKEv2/IPSec. There’s also powerful bank-grade encryption and a no-logs policy. You can use this VPN on up to seven simultaneous devices with one subscription. And you can unblock more foreign content because CyberGhost VPN has streaming servers and 7,000+ servers in 90+ countries.

Other things we like are the cheap prices, the 45-day money-back guarantee, and the 24/7 live chat and email support.

One of HMA’s unique selling points is that it has 1,000+ servers in 210+ countries. This VPN seems to have the biggest number of available locations. To get an Iran IP, you can use two servers located in Isfahan. Both are virtual locations. Unfortunately, they don’t support P2P traffic.

HMA has a somewhat unique feature called IP Shuffle. You can make the app change your IP at random intervals to get more privacy.

HMA has unlimited bandwidth, up to five parallel connections, and pretty good speeds. It also has user-friendly apps for most devices: Windows, macOS, Linux, Android, and iOS. HMA comes with a no-logs policy, powerful encryption, and the OpenVPN protocol.

Other perks include a kill switch, leak protection, and split-tunneling. Though, the latter is only available on Android for now. You also get decent prices for long-term plans, a 30-day refund, and 24/7 live chat and email support.

VPNArea lets you use its service on up to eight devices simultaneously with one account. That makes it the Iran IP VPN with the most parallel connections.

VPNArea has 1 server in Iran and it’s a physical one, meaning it’s actually located in Iran. Having physical servers there is risky, and – unfortunately – VPNArea didn’t want to elaborate on how they ensure their servers are safe. But they did tell us they go to great lengths to secure their physical servers.

VPNArea has Windows, macOS, Linux, Android, and iOS apps. The provider has strong encryption, a no-logs policy, full leak protection, and a kill switch. You can use either the OpenVPN or IKEv2/IPSec protocol. Both protocols are secure options, but IKEv2/IPSec is faster.

This provider’s servers support P2P traffic, but the total server count is pretty small: around 190+ servers in 50+ countries. Due to that, our connections were a bit slow because many servers were overcrowded – including the Iran server. On the plus side, you get unlimited bandwidth.

VPNArea has competitively-priced plans and a 30-day money-back guarantee for long-term plans. It also offers 24/7 live chat and email support.

VPNs with Iranian IPs to Avoid

During our research, we came across two more VPNs that advertised Iranian IPs. After looking into them and running some tests, we concluded that they’re just not good.

UrbanVPN is a free peer-to-peer VPN that claims to have an Iran VPN server on its site. We installed the app, but couldn’t find the server. It’s not a premium feature you pay extra for because UrbanVPN does not have a paid plan and never will according to its marketing copy.

Besides that major problem, UrbanVPN also has very slow speeds and a very basic app. There are no extra features, just a list of servers. Also, when we ran leak tests, we noticed IP leaks.

However, UFO VPN’s customer support is really bad. Email is the only option, and we never got a reply to our questions.

Also, it has serious privacy issues. Many VPN reviews say UFO’s Privacy Policy used to say the VPN kept usage logs and shared them with third parties. It doesn’t say that now, but here’s another problem – UFO VPN had its database leaked online. They didn’t bother to secure it. But that’s not all. The leak also showed that UFO VPN actually kept logs, including IPs and user passwords that were stored in plain text.

We also don’t like UFO VPN’s protocols. The provider doesn’t say which protocols it uses. It just calls them Protocol A, B, C, and D. It’s weird that UFO VPN doesn’t specify what protocols it uses or what technology they’re built on. They don’t even say if the protocols were developed by them.

So we don’t think that it’s safe to use UFO VPN to get an Iran IP address.

What’s the Best VPN for Iran?

To bypass censorship, unblock geo-locked sites like Netflix US and BBC iPlayer, or secure your traffic inside Iran, you’ll need a VPN that works there. You can find a good one by reading our guide.

In this section, we answered some common questions we received about VPNs and Iran IP addresses.

What Is the Iran IP Address Range?

We unfortunately can’t list all Iran IP blocks. It would simply take too long. But you can use this link to check all IP blocks assigned to Iran. You can also see who they were assigned to.

VPN providers don’t like renting or setting up servers in restrictive countries like Iran, Russia, China, and more.

One solution would be to offer virtual locations in Iran. We can’t say why many VPNs don’t do this. Maybe they only want to use physical servers. Or maybe there just isn’t enough demand among their users for Iran IP addresses.

Here’s what sets them apart:

Physical servers are normally better because they’re less laggy since they’re located in the same country as the sites you unblock. However, hosting physical servers in Iran is risky due to government censorship and surveillance. It’s also unreliable due to slow speeds, unstable connections, and Internet blackouts.

Can You Get an Iran IP with a Free VPN?

Yes, but we don’t recommend using a free VPN. While you might get an Iran IP address, you won’t enjoy using it. Free VPNs are often very slow and have bandwidth caps. What’s more, they display ads and might log your data which they could later sell to advertisers. If you’re extremely unlucky, a free VPN could even expose you to malware.

And a free VPN will lack important features like a kill switch, split-tunneling, good VPN protocols. Also, it won’t have dedicated 24/7 support. And some free VPNs might not even have Iranian servers even though they advertise them.

Overall, it’s much better to use a paid VPN to get an Iran IP. CyberGhost VPN has very cheap long-term plans and a 45-day money-back guarantee, so it’s an affordable and risk-free buy.

Will I Have Slow Speeds If I Get an Iran IP?

Yes, you might – it depends on how far your current location is from Iran. If you’re in Europe or North America, it will take much longer for data packets to travel between your device and the Iran VPN server.

VPNs can minimize the slowdown by offering many servers to prevent overcrowding. It also helps if they have fast VPN protocols like WireGuard and IKEv2/IPSec, and unlimited bandwidth. Virtual locations can also boost speeds. But only if they use physical servers in countries with better Internet infrastructure.

VPNArea has only one server and it doesn’t even work. Terrible service too.