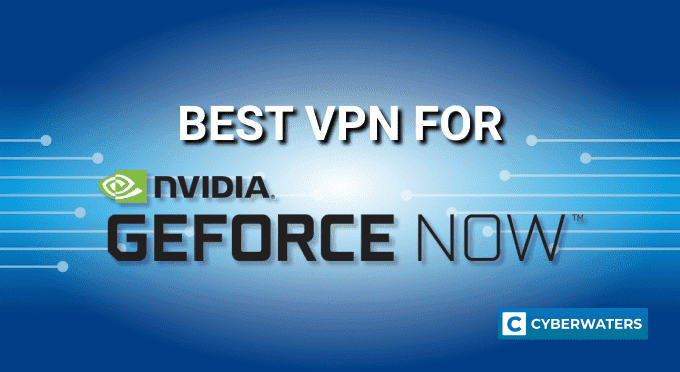 GeForce NOW isn’t available worldwide (and neither are all the games on the platform). Using a GeForce NOW VPN helps you bypass that issue. Unfortunately, there are hundreds of VPNs on the market, so picking a good one is hard.

We did our best to make that process simple for you with this quick guide. We tested dozens of services to find the best VPNs for GeForce NOW.

Here are the best VPNs for GeForce NOW:

How to Pick a Good VPN for GeForce NOW

This is what we look for to make sure we’re using a reliable service:

It’s hard picking a VPN since there are so many on the market (easily over 100). We hopefully made the process simpler by testing dozens of providers until we were left with the best VPNs for GeForce NOW.

We always had the best experience with NordVPN. The service has lightning-fast speeds thanks to its large network (5,400+ servers in 59 countries) and NordLynx protocol (It’s own protocol built around WireGuard technology). AV-TEST’s study also concluded that NordVPN is the fastest VPN on the market.

We tested NordVPN with many GeForce NOW games: Minecraft, Fortnite, and Apex Legends. We generally had low ping and lag, and fast load times.

NordVPN offers a great experience by providing unlimited data and easy-to-use apps for most platforms (Windows, macOS, Android, Android TV, Chrome). Besides NordLynx, you can also use OpenVPN and IKEv2/IPSec (another fast protocol).

Surfshark offers unlimited simultaneous connections with one account. You can use it on as many devices as you want. You can also share a Surfshark subscription with friends and family to save money.

With Surfshark, you get fast streaming speeds. The provider has unlimited bandwidth, speedy protocols (WireGuard and IKEv2/IPSec), and a large server network (3,200+ servers in 65 countries). Surfshark also has intuitive apps on all platforms (Windows, macOS, Android, Android TV, Chrome).

You also get powerful encryption, a no-logs policy, a kill switch, and decent leak protection. You have to manually disable IPv6 on your end, though. Surfshark also offers split-tunneling, which is perfect for optimizing VPN speeds.

Finally, you get 24/7 live chat support and a no-questions-asked 30-day refund. What’s more, Surfshark has some of the cheapest prices on the market.

With AtlasVPN and it’s high speed servers all across the world you won’t have to worry about the fact that GeForce NOW isn’t available worldwide, you can very quickly switch locations and access it from anywhere. There aren’t any data caps when using AtlasVPN and it is available on an unlimited number of devices simultaneously, so you can play the games with your friends or family.

AtlasVPN has easy-to-use apps available for all major operating systems and devices as well as many protocols to choose from, fastest of which is Wireguard, to ensure seamless gaming experience. Even if you are new to the VPN world – you will surely enjoy the user experience that this provider offers.

With one of the best prices on the market and a wide range of features designed to keep your connection fast and secure, Atlas is definitely the best GeForce NOW VPN choice. You can try it risk free with the 30-day money back guarantee.

PrivateVPN offers above-average connection speeds, backed up by a very solid server catalog. The service currently provides over 200 server locations across 63 countries globally. What’s more, you can take advantage of unlimited data and server switches. PrivateVPN allows you to connect up to six simultaneous connections per single subscription plan.

In terms of protocols, you can count on three OpenVPN variations, PPTP and L2TP. You can also customize encryption settings between several 128-bit and 256-bit encryption options. PrivateVPN offers apps for all major OS platforms, with all apps packed with strong security and privacy features.
All of these features sound even better when you consider that PrivateVPN is one of the most affordable services in the industry. Moreover, every subscription plan comes with a no-questions-asked 30-day money-back guarantee.

ExpressVPN has very fast speeds thanks to its Lightway protocol. It’s designed to be lightweight, and it even connects to servers in no time (around a fraction of a second). We usually get low ping while playing Fortnite and Minecraft on GeForce NOW – even while connected to far-away servers.

What’s more, ExpressVPN offers unlimited bandwidth, 3,000+ servers in 94 countries, multiple protocols besides Lightway (IKEv2/IPSec, L2TP/IPSec, OpenVPN), and a very user-friendly design. You won’t have trouble understanding how ExpressVPN works even if you never used a VPN before. And ExpressVPN’s apps work on most devices (Windows, macOS, Android, Android TV, Chrome).

If you ever experience a problem, you can reach ExpressVPN’s support reps 24/7 through live chat. And while the pricing is a bit steep, you get a no-questions-asked 30-day money-back guarantee.

How to Use a VPN with Nvidia GeForce NOW

How to Speed Up GeForce NOW VPN Connections

GeForce NOW requires faster Internet speeds than most streaming sites. To enjoy 720p quality and 60 FPS, you need at least 15 Mbps. And to get 1080p quality at 60 FPS you need at least 25 Mbps. Also, if you’re using WiFi, you’ll need a 5 GHz router instead of a 2.4 GHz one.

The problem is that VPNs slow down your online speeds by encrypting your data (that makes data packets heavier, so it takes longer to transport them). If your ISP speeds aren’t fast enough, the slowdown can be noticeable and annoying.

The good news is there are things you can do to increase your GeForce NOW VPN speeds. Here’s what we recommend:

These are the most common questions we saw people asking about Nvidia GeForce NOW and VPNs. If you have more, just leave them in the comments.

What Is GeForce NOW?

GeForce NOW is Nvidia’s cloud gaming service. You play games hosted on remote servers, meaning you can play modern games on underpowered devices. The games are streamed to your device via the Internet, so all you need is decent Internet speeds.

Some games available on GeForce NOW are free to play (like Fortnite), but you will need to own the paid games to play them.

Do I Really Need a GeForce NOW VPN?

You need a VPN for GeForce NOW if the service isn’t available in your country. The VPN will hide your geo-location by stopping GeForce NOW from seeing your IP address (it will only see the VPN’s IP).

Even if GeForce NOW is available in your country, you might not get access to all games due to licensing regulations. By hiding your location, a VPN can help you unblock geo-locked games.

Besides that, here’s what else an Nvidia GeForce NOW VPN can do:

Is GeForce NOW Available in India?

No, GeForce NOW isn’t available in India. The country doesn’t show up on Nvidia’s list of supported regions. We also used an Indian server from NordVPN to access GeForce NOW’s site and got a message telling us something along the lines of “GeForce NOW is not available in your region.”

To use GeForce NOW in India, you need to use a VPN server in a country where the service is available. We recommend UK VPN servers to get the best speeds.

Can You Use a Free VPN for Nvidia GeForce Now?

Yes, but we don’t recommend using free GeForce NOW VPNs. They usually have slow speeds, so you’ll experience annoyingly high ping and lag. Free VPNs also have bandwidth caps (anywhere between 500 MB and 2 GB per month), which will make playing anything in 1080p pretty much impossible (it consumes around 1 GB per hour).

That’s not all. Free VPNs also have buggy apps, little to no customer support, and many ads. What’s more, if you use random free gaming VPNs nobody has ever heard of, they might expose you to malware and log your data (to sell it to advertisers).

It’s better to stick with paid VPNs. The ones we mentioned in this article have attractive pricing for long-term plans and 30-day money-back guarantees (so they’re risk-free buys).

Will a GeForce NOW VPN Decrease Lag and Ping?

But if you use a VPN, your traffic might take this path:

Keep in mind VPNs can increase your ping and lag too. It mostly depends on your luck. When we ran tests, we mostly saw improvements (instead of the usual 60-70 ms, we had 40-50 ms).