Does VPN work on mobile data? How much data does it use? 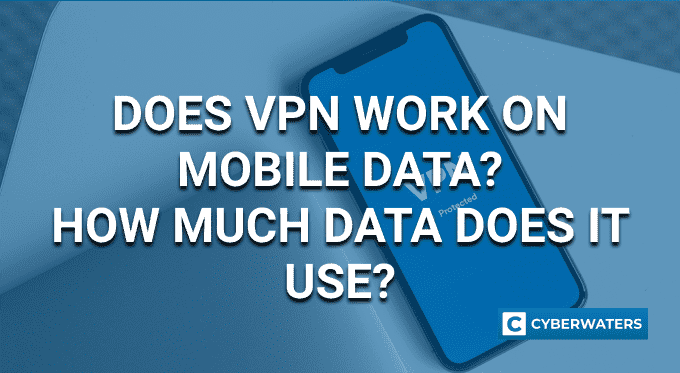 A VPN is a service that not only protects your personal data but can be used anywhere where the internet is accessible. It is widely used to browse privately not only on your laptop but on mobile devices as well. Many VPN providers created apps specifically available for Android and iOS platforms and since mobile devices can use both Wi-Fi and cellular data let’s see if VPN works on mobile data as well. If so, how much of the data does VPN use?

Does VPN work on mobile data

It really does not matter whether you are connected to Wi-Fi or established a mobile (cellular) data connection – a VPN will always work where the internet is accessible. A VPN on mobile data will encrypt and secure a connection so that your cellular internet traffic is protected from being sniffed by the mobile network provider or third parties.

Here’s how a VPN on mobile data works:

A mobile data connection uses radio frequencies to connect to a Mobile Data Tower Station that is owned by your ISP. Then the internet traffic is routed to the ISPs servers until it reaches a VPN server. As you can see, there is quite a lot of points your mobile connection travels through until it reaches its destination. Using a VPN on mobile data would encrypt and protect all your internet traffic and data across each of these points until the VPN server. From there your connection goes out in the open waters of the internet to access your final destination – be it a website or a file.

Many VPN providers have their apps for iOS or Android devices and these applications work on both Wi-Fi and mobile (cellular) data. But some of you might wonder, can a VPN use more data – does it increase your data consumption?

Does a VPN use more data

Using a VPN can definitely increase your data consumption. It uses more data because it requires to encrypt your internet traffic and this creates some overhead. How much more data a VPN can use depends on the VPN protocol used to connect to a VPN server.

Usually, safer protocols such as OpenVPN with a 256-bit encryption key might use more data than the most simple (and not really secure) VPN protocol such as PPTP.

To see how much mobile data exactly is consumed with and without a VPN, I tested this by streaming an exactly 5-minute Youtube video using a cellular connection. I used a network monitoring app called 3G Watchdog and NordVPN, and here are the results:

With this general experiment just wanted to show some real numbers of what kind of overhead you can expect when using a VPN on cellular data. There are many factors that can play a role in the increased usage of mobile data, and one of them is a VPN protocol used (in this case, OpenVPN with 256-bit key encryption was used).

VPN protocols vary in their implementation and encryption standards. Depending mainly on their level of security, the VPN data overhead can vary greatly. The least secure protocols, such as PPTP, mean they have less complex encryption algorithms and use less data while the ones with 256-bit key encryption would use the most.

Some VPN providers would use an extra obfuscation protocol on top of a regular OpenVPN to mask the VPN traffic in order to bypass VPN bans and restrictions. With this feature turned on the mobile data overhead is the biggest.

It is also worth mentioning, that an OpenVPN protocol has some compression features to reduce the increased consumption of data, however, browsing regularly would barely make the use of this feature since on such a small amount of data there’s not much to compress. Compressing (imagine analogy of “zipping”) would only take effect if huge amounts of data are transferred in cases such as downloading huge files or streaming an entire movie (which you probably don’t want to do on a mobile data connection).

How much data overhead a VPN protocol can create there’s a general rule – the more advanced and secure (256-bit key) will use more data rather than less secure (128-bit key) protocols. All protocols can come in both versions, but it is doubtful that any VPN provider would use any less secure than a 256-bit key encryption protocol.

To answer the question, which VPN protocol uses the least data, here is the list of the most common VPN protocols in order (from the least to the most data-consuming):

Which VPN protocol is best for mobile data

One VPN protocol that would be best to use when on mobile data is IKEv2/IPSec. This is due to its really fast reconnection to the VPN server when constantly changing the networks during the day. This protocol is widely used on mobile devices and has the capability to quickly re-establish dropped connections.

Can a VPN bypass Data Caps

A VPN can bypass some restrictions, unfortunately, it can not bypass or increase the data caps set by your ISP. This is because all your VPN traffic is still routed via ISP servers that monitor your mobile data consumption. In fact, it counts the overhead that is generated when using a VPN towards the data cap as well.

An ISP monitors not only the amount of data used but also what services you use – be it Netflix, YouTube or other. Some mobile network providers might control the internet speed when trying to access those services. A VPN makes it unknown for ISP where you try to connect, therefore, it can bypass some speed restrictions (or so-called throttling).

Should you use a VPN even when on cellular data

To use a VPN on cellular data is like using it on a Wi-Fi – it would increase your privacy by preventing any ISP from seeing which websites you visit. But as said before – keep in mind that using a VPN on mobile data would slightly increase your data consumption.

Should you use a VPN when mobile data is on – it depends. Most of the time it would give exactly the same benefits as using on a Wi-Fi – privacy, security, unblocking content and circumventing internet censorship and restrictions.

A VPN does make mobile 3G or 4G and any kind of internet connections more secure by encrypting them. Using a VPN on mobile data would prevent your internet service provider from knowing what you do online. Securing cellular connections is as essential as browsing on public Wi-Fi.

Using a VPN on mobile data would be most beneficial if you want to browse privately and access restricted websites when traveling abroad. However, since all your internet traffic is encrypted with strong encryption this creates a data usage overhead when on cellular data. This might not be the best if you have a limited mobile data plan since this data consumption overhead counts as well. A VPN can not bypass any of the data caps, unfortunately, but it is still a good idea to use a VPN on a cellular connection for security, privacy and bypassing censorship.