How to Increase VPN Speed (8 Easy Ways to Lower Ping) 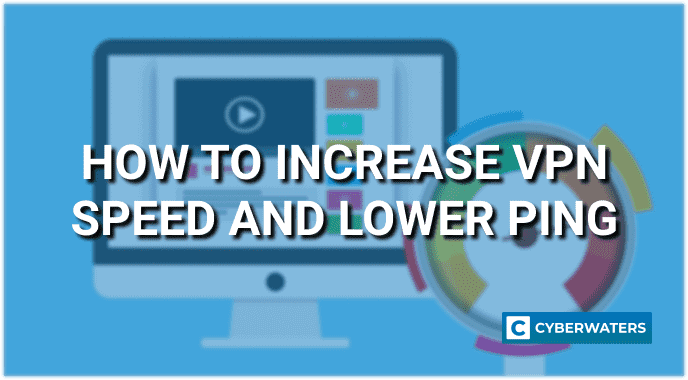 There is nothing more frustrating than having a slow internet connection. But did you know that using a VPN can make it even slower? It may slow down your connections because of the strong encryption it uses to protect you.

But, not all VPNs are slow. Some may even increase your speed by choosing better routing paths than your ISP. It all depends on the settings you choose. If you are experiencing lag or low ping, there are ways to boost your VPN speed.

But first, let’s take a look at how VPN can influence your internet connections.

Does VPN Slow Down Internet Speed

A VPN may slow down your internet speed from 5% to 30% on average. It reduces speed because it encrypts and decrypts your connections. Factors like the VPN server’s load, distance to it, and the protocol used can also affect your internet speed. A VPN provider’s network configuration may also decrease your bandwidth.

How to Increase Your VPN Speed

If you’re experiencing slow internet speeds when connected to a VPN, try to follow these easy tips to get the results you want:

Connect to the Closest VPN Server

A distance to a VPN server directly influences your internet speed. The further the server is from your real location the more time it takes for the internet packets to travel. A large distance slows down your connections, causes lag, and increases latency.

Let’s say if you are located in the US and trying to visit a local website, but you connect to a VPN server far away. That creates a huge round trip that your connection has to take. This increases connection times, reduces download speeds, and may even timeout.

The best speeds on a VPN can be achieved if you connect to a server that is closest to you. It is completely fine to connect to the same country you live in. The security and privacy provided by a VPN still are the same as connecting to any other country.

When you want to access restricted content of course you need to connect to a specific country. In this case, try to choose a city or region that is as close to you as possible to get the best results.

Switch to the Least Loaded Server

When many people connect to the same server they create a server load. All the data that travels though needs to be processed by the server with the limited resources it has. When these resources can not be accessed immediately it is said that a VPN server has a big load.

A loaded server puts all data in a queue and delays it. All this delay time is what creates a slow internet connection on a VPN.

Some VPN providers put a bandwidth limit to deal with increasing data transfers. This may also help to ensure a smooth experience for all users connected to that server. But, the best VPN services do not limit your bandwidth as speed is important for a stable VPN connection.

The easy way to increase your VPN speed is to connect to the least loaded server. You might need to switch to a few servers until you find the one that performs the best. Over time, many people can connect to the same server and slow it down. So, for the best speeds, you can also try to often change them.

A VPN protocol you choose might affect your speeds. Different protocols use different encryption algorithms to protect your traffic. They can vary in levels of security, complexity and the time it takes to encrypt and decrypt your data.

Also, some ISPs can restrict certain traffic based on a protocol used. It is rare that and ISP would throttle a VPN, but it might happen in restricted countries.

The stronger the encryption means it takes longer to process. Very complex algorithms and configurations may dramatically slow down VPN speeds.

The newest and most modern VPN protocol to date is WireGuard. It not only uses strong encryption but is the fastest of all.

You can also try to switch between TCP and UDP protocols. Most of the time UDP is the default choice of many VPN apps.

There are also L2TP, IKEv2, and SSTP protocols which can also increase your speeds.

A PPTP protocol is considered the fastest, but the least safe. Its security is compromised and you should not use it for privacy.

One reason why your VPN might be slow is related to your device itself. Your PC or smartphone uses its CPU power to encrypt and decrypt VPN connections. An outdated CPU can greatly slow down this process and create lag in the end.

Some newer CPUs have an encryption accelerator mechanism. The encryption process in such devices is almost instant and barely noticeable.

The router you use might also play a role. Old routers might not have good processing power and may limit your bandwidth. If the VPN is set up on the router itself and the encryption time might increase due to lack of resources.

Do Not Use Unnecessary Features

Some VPN providers offer an extra feature that is commonly known as double or multi-hop VPN. It routes your internet traffic from one VPN server to another and encrypts it twice. Even though it may add extra privacy, it makes your internet a lot slower.

There are also specific VPN servers that can route your traffic via the Tor network. These servers sacrifice a huge part of the VPN speed for privacy. Tor networks is generally really slow and you should avoid connecting to them.

Another common feature is masking VPN traffic. It helps in cases where VPNs are blocked or throttled. With this feature, you can bypass restrictions in countries like China or the UAE. But, even though it makes your VPN traffic harder to spot, it does reduce your speed. It is not advised to use it unless you really need to bypass censorship.

It is best to avoid using extra features besides a standard VPN for good speeds.

Switch to a Faster VPN Provider

Every VPN provider has a different network and app configurations. Different technologies, operating systems, and hardware may influence its speed.

The best services always have unlimited bandwidth and great speeds on their servers. If you constantly get slow speeds with your current provider, maybe it’s time to try a new one?

Services like NordVPN, ExpressVPN, or Surfshark all have fast server networks. Some even have the fastest WireGuard protocol and support unlimited P2P traffic. Make use of their 30-day money-back guarantee that all these providers offer.

You maximum speed limit depends on your chosen internet plan. A regular home internet plan is usually 50-100 MBit/s and even with a VPN, you can not bypass this limit.

If you have a low-speed internet subscription consider getting a new one. A VPN slightly decreases your internet speeds making your limited plan even worse.

Use a Wired Connection

Using Wi-Fi and mobile connections on a VPN may not be as fast as using a cable. The router’s signal strength might not be enough to have stable VPN connection. Optical fibers are the fastest medium and have the least effect on your internet speed.

For a VPN to work properly a wide bandwidth and strong signal is essential. It need this to keep a connection with a server. Switching from mobile or Wi-Fi to a direct connection will show better results almost always.

How to Test Your VPN Connection Speed

It is very easy to test the VPN speed. All you need to do is connect to a VPN server and run one of these automatic speed tests. They will tell you latency (ping), upload and download speeds. One of the best options to test VPN speed is www.speedtest.net

Once you do it with a VPN on, disconnect from the server, and do the test again. It will give you an idea of how much slower the connection is with and without a VPN. You can select the same server, so the speed tests could be more precise.

I did a speed test on a regular home 50 MBit/s internet plan from a local ISP using NordVPN on speedtest.net

Using the same servers, I tested the local speeds and connection from Europe to the US. Here are the results:

Europe to the US without VPN

Europe to the US with VPN

A VPN speed depends on the distance to a server, its load, and the encryption protocol used. A server network configuration and your device’s capabilities also play a role.

Most of the time, the best VPN services have great setups for you to reach fast speeds. If you’re looking for a fast and reliable VPN, try one of these: