How to unblock websites in UAE / Dubai and hide from ISP 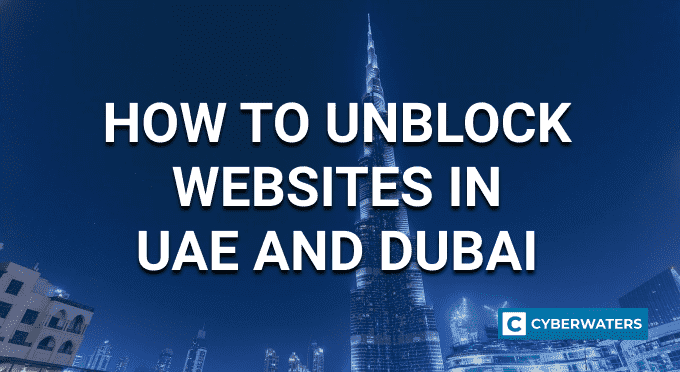 The UAE, including Dubai, blocks many popular websites. You can not access Facebook, Instagram or use WhatsApp or Skype. ISPs like Du or Etisalat track all internet traffic and restrict internet freedom. The Telecom Regulatory Authority controls what content you can see online. Luckily, there’s an easy way to unblock websites in the UAE and it’s using a VPN.

Which VPN features you need for accessing censored websites in UAE

Not every VPN can bypass internet censorship in The United Arab Emirates. The government actively blocks VPN connections, so you need a good service to unblock restricted content. Here are essential features for a VPN to have if you want to enjoy internet freedom in Dubai:

How to access blocked websites in UAE and Dubai with VPN

The easiest and most secure way is to use a VPN.

Here is how to unblock websites in UAE or Dubai:

Note: UAE blocks websites that advertise a way to bypass the internet censorship. It is best if you either get a VPN before traveling to Dubai as it might be problematic to get one once inside UAE.

5 Best VPNs to unblock websites in UAE and Dubai

NordVPN is one of the top-performing VPNs on the market that can unblock websites in UAE and Dubai. It has an obfuscated server feature that allows you to bypass internet censorship. It also hides the fact that you use a VPN from the ISP.

NordVPN was independently audited and proven that it does not keep any logs. This Panama-based service has next-generation encryption, IP leak, and DNS leak protection. Internet Kill Switch is also a part of its security suite.

The service is a great choice for those who want to stream movies as it works with Netflix, Hulu, Hotstar, or Disney+. It can unblock VoIP calls and apps such as Skype or Whatsapp.

NordVPN has apps for all platforms and allows you to connect up to 6 devices at once. All plans are very affordable and come with a 30-day money-back guarantee.

Surfshark is VPN that can bypass censorship in the United Arab Emirates and Dubai. It has a Shadowsocks protocol that can unblock websites and hide the VPN traffic from ISPs .

This provider does not keep any logs and has AES-256 encryption. It fully supports torrenting and has an internet kill switch to protect from any DNS or IP leaks.

Surfshark allows you to connect an unlimited number of devices with the same account. It has an integrated ad-blocker and malware protection and a split tunneling.

This VPN works with 15 Netflix libraries all around the world. It also can access streaming services like Hulu, BBC iPlayer, Disney+, or Hotstar.

Surfshark is surprisingly one of the cheapest VPNs which can cost as low as 1.99$/month. It also has a 30-day money-back guarantee.

With 750+ servers to choose from, Atlas VPN makes bypassing internet censorship in the UAE and Dubai easy. It masks your IP, encrypts your internet traffic, and unblocks the websites that are otherwise restricted by your ISP.

This includes streaming sites too. By connecting to one of the servers optimized specifically for streaming, you will be able to unblock and watch your favorite content regardless of where you are based. You can enjoy this content on multiple devices at the same time since the service has no restrictions on simultaneous connections.

Atlas VPN employs unique SafeSwap technology on selected servers which allows you to access the web from multiple IP addresses at a time. This, along with the network killswitch and advanced leak protection for IPv4 and IPv6 connections, adds an extra layer of security to all your online activities. No logs will be kept either as the service abides by a strict no-logging policy.

You can try the Windows, Android, macOS and iOS apps with a 30-day money-back guarantee.

PrivateVPN is a Swedish VPN service that has a ZERO log policy. Its strong 2048-bit encryption with AES-256 is great for masking your internet traffic. It’s a low-cost choice for Dubai with servers in 60 countries.

It supports many VPN Protocols like OpenVPN, PPTP, L2TP, IKEv2, and IPSec. It also has IPv6 leak protection and an Internet Kill Switch.

PrivateVPN allows up to 6 simultaneous connections. It has apps for Win, Mac, iOS, and Android.

It is a P2P-friendly service which also allows port-forwarding. It’s a fast service with unlimited bandwidth and speeds.

PrivateVPN has decent prices and all plans have a 30-day money-back guarantee.

ExpressVPN is another excellent choice for accessing censored websites in UAE. The service works in Dubai and does not keep any personally identifiable information.

As a privacy-focused service, it has no IP or DNS leaks. It also offers a Network Lock feature and best-in-class AES-256 encryption. The servers run on RAM memory, which means that all logs are deleted after restarting the server.

This VPN provider can unblock streaming sites like Netflix, Hulu, or BBC iPlayer. It also works with VoIP apps like Skype, Whatsapp, Facetime, or Discord.

ExpressVPN also has full P2P/torrenting support with excellent download speeds. In case you want to access both local and foreign content, there’s a split tunneling available.

The apps are available for Win, Mac, iOS, Android, and Linux. ExpressVPN has a 30-day money-back guarantee.

Is VPN illegal in UAE

According to the UAE Cybercrime Law No. 5 of 2012 the use of VPN is not illegal as long as you do not commit a crime using it.

That means you can use a VPN in the UAE, like many people do, as long as you don’t do anything illegal.

Why does the UAE block websites and apps

Telecom Regulatory Authority (TRA) has the power to control all internet traffic. It can tell what websites to block and ISPs have to follow the regulations. Those regulations are greatly influenced by cultural and economic reasons. ISPs block all content that is harmful or is against society’s moral principles. UAE also blocks almost all VoIP apps such as FaceTime, Whatsapp, or Skype. The main incentive for ISPs not to allow such communication is economic.

One of the major sources of revenue for Etisalat and DU are international calls. These ISPs could not compete with free video call apps and they would lose a big part of their income. So to protect their network of investments the government decided to block all VoIP apps.

Interesting fact, that UAE allows the use of the popular free HD video and voice call app called Botim. But, the users who want to use it actually have to pay a monthly fee to unblock it. It is a free source of revenue for telecommunication companies.

What websites are blocked in the UAE

The websites that are blocked fall into these categories:

Which apps are blocked in UAE

Here are the common apps that are blocked in UAE and Dubai:

How to bypass VPN blocking in the UAE and Dubai

The ISPs in UAE block VPNs all the time. Often even the best services can temporarily stop working. What if you have some trouble connecting with your chosen provider?

Here is how to bypass VPN blocking in the UAE:

To unblock websites in UAE and Dubai you need a VPN. Despite the fact the ISPs block VPNs there are a few that still work. The best services offer zero-log policy, stealth features and can unblock VoIP apps like WhatsApp, Skype or Discord.

Getting a VPN is not easy in Dubai, therefore it’s best to get it before getting inside the country. Which VPN service worked best for you? – comment down below!