5 Best VPNs for Minecraft to Bypass IP Ban in 2023 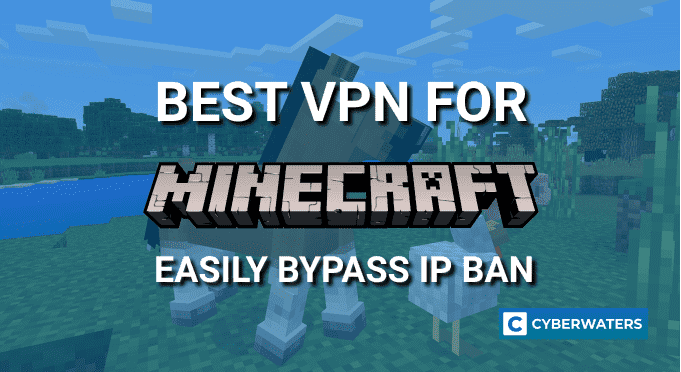 If you’re a Minecraft player, you probably know how annoying it can be when someone bans your IP address. Luckily there is an easy way to bypass the Minecraft IP ban using a VPN.

But, not all VPNs are suitable for Minecraft. Sometimes when using a VPN, you might see a “could not connect to server” message. To avoid that, you need to choose a good service.

Here are the best VPNs for Minecraft:

There are no official statements in the Terms of Service or Privacy Policy on VPN use. But, Mojang started to block VPN connections that try to access the game. Many players report that they either are banned or unable to connect to a Minecraft server with a VPN.

Minecraft can block VPN if they see unusual activity from that IP address. Most of the time these are players who misbehave or hack in the game, thus, getting an IP ban.

How to Play Minecraft with VPN

Here’s how to play Minecraft with a VPN:

Are you looking at how to unblock Minecraft at school or want to bypass an IP ban?

Here are the Best VPNs for Minecraft:

NordVPN is the best VPN for Minecraft. Moreover, it headlines our list of the top gaming VPNs, as it offers superior performance features in this regard. It has more than 5600+ servers in 60+ locations that can remove your IP ban on Minecraft. The lightning-fast speeds improve your gaming experience and even might reduce ping.

NordVPN has anti-DDoS protection that is beneficial when gaming online. It also does not keep any logs, so your connections stay private.

It also offers a Dedicated IP if you want to unblock Minecraft or restricted content. Additionally, NordVPN works on every platform, unblocks Netflix, and supports torrenting. All its plans come with a 30-day money-back guarantee.

Surfshark is a feature-packed VPN that provides privacy and good speeds. More than 1700+ servers in 60+ countries are suitable for gaming and streaming videos.

This service can easily unblock any content, game, or remove an IP ban on Minecraft.

All apps are available on Windows, Mac, iOS, and Android and support 5 devices at once. It has a Camouflage technology that masks the VPN traffic and allows you to bypass VPN detection.

Surfshark’s plans are very affordable and all have a 30-day money-back guarantee.

Atlas VPN is a prime choice for gamers. Whether it’d be reducing lag and ping, or bypassing Minecraft IP bans, it will have you covered.

It offers the WireGuard protocol which is already used by gamers as one of the fastest VPN protocols out there. And the 750+ servers in its network extend your digital reach to many countries and regions.

If you’re not looking to connect to a specific location but rather for a fast and secure gaming experience, you can make use of the best location detector. It will pick the ideal server for you based on proximity and speed. And in the case your VPN connection drops, the network kill switch will terminate internet access so your real IP doesn’t leak and isn’t recognized by Minecraft which helps avoid any bans.

Atlas VPN is an affordable choice that allows for speedy gaming on all major platforms with its apps for Windows, Android, macOS, and iOS. It also offers a 30-day money-back guarantee for all its plans.

PrivateVPN might not be the best-known VPN on this list, but it’s undoubtedly one of the best quality services on the current market. A selection of 200+ server locations sounds pretty good and is even more impressive when considering a handful of protocols and encryption settings available in-app.

This VPN is an excellent choice for any Minecraft player, regardless of their location. From Australia to the UAE and the USA to China, it covers every corner of the globe with its super-fast servers. Plus, as the service offers apps for all major platforms, you can enjoy Minecraft on any computer or mobile device of your choice.

PrivateVPN offers reliability and consistency across the board. You don’t have to worry about connection drops or lag issues, as this service has a fantastic 99.98% uptime. Best of all, it’s on the more affordable scale of the price range. All of this makes PrivateVPN one of the best value-for-money VPNs you get.

ExpressVPN is another great VPN to play Minecraft. Good speeds and protection allow bypassing IP bans easily. It might be the most technically advanced VPN that truly stays to its slogan – “it just works”.

An extensive server network with over 180 locations can unblock the game anywhere. Great speeds and unlimited bandwidth do not increase ping and allow you to remove those bans.

It’s a great choice as it has the best-in-class encryption, security, and strict no-log policy.

All plans come with a 30-day money-back guarantee too.

How to Choose a VPN for Minecraft

How to Bypass IP Ban on Minecraft

If you want to get into a Minecraft server you are banned from it is best to use a VPN. When you get blocked then simply change to another VPN server. Every time you connect to another server using a VPN you get a new external IP address. A new server removes an IP ban that allows you to connect to Minecraft again.

Here’s how to bypass the IP ban on Minecraft:

Once you pick the VPN you want to use, install it, and log in, you’ll have to choose the VPN server carefully based on your location. Preferably, you should connect to a nearby server location to ensure the best connection speeds and minimize the chance of any lag or ping when playing. You should do the same for the Minecraft server you connect to.

In case you repeatedly experience bans or connection issues when trying to play Minecraft through a VPN server, try adjusting your VPN settings. Activate any advanced stealth features if available, experiment with different protocols and encryption settings until you find what works best in your case.

If you follow the steps we’ve laid out above, you’ll never have trouble bypassing Minecraft IP bans. Whether you’re gaming at work or school, these setup steps from above will allow you to always access Minecraft from anywhere and enjoy the game without any restrictions.

How to Hide VPN When Playing Minecraft

Minecraft IP blocking technologies are becoming more and more sophisticated. They can detect Proxy or VPN usage. Mojang uses the data collected by third parties about VPN server IP addresses. Once they discover a VPN they block the whole range of those addresses belonging to a VPN provider.

If you use a blocked VPN IP address you would not be allowed to connect to a Minecraft server. To play the game you need a really good and secure VPN that often changes its server IPs.

You need to hide that you are using a VPN from Minecraft’s anti-VPN technologies. Luckily there are some simple tricks to do that.

Here’s how to hide a VPN when playing Minecraft:

To bypass an IP ban on Minecraft is very easy – you only need to change to another VPN server. The best one to do that is NordVPN. It has low latency and an extensive very fast server network that is amazing for gaming.

If you’re looking to unblock the game from school or another location you should consider a Dedicated IP. It will hide your VPN traffic from Mojang.

How can Minecraft detect a VPN?

Will I get banned for using a VPN on Minecraft?

High chances are that you won’t get banned just for using a VPN on Minecraft, although the developer Mojang frowns upon players using VPNs. That said, some Minecraft servers might enforce VPN bans more stringently. Still, this is not such a big problem, as you can just connect to another VPN server and join again.

What is the best free VPN for Minecraft?

The best free VPN for Minecraft is Atlas VPN. Although it is primarily a premium VPN service, Atlas VPN also offers an impressive free subscription plan. It comes in a limited form but still supports many convenient features that make it an excellent choice for Minecraft players.

Where is Minecraft blocked?

Currently, Minecraft is blocked only in Russia due to the country suffering all types of sanctions in most global industries. That said, even in countries where Minecraft isn’t blocked, you might find some servers unavailable. In these cases, a Minecraft VPN is a great tool for ensuring unrestricted access.

Can I play Minecraft with a VPN on mobile?

Yes, you can play Minecraft with a VPN on mobile without any limitations. This goes for both iOS and Android users. As long as you have a device powerful enough to run Minecraft without any issues, a stable connection, and pick a Minecraft VPN with a reliable recommended mobile app, you can enjoy Minecraft.