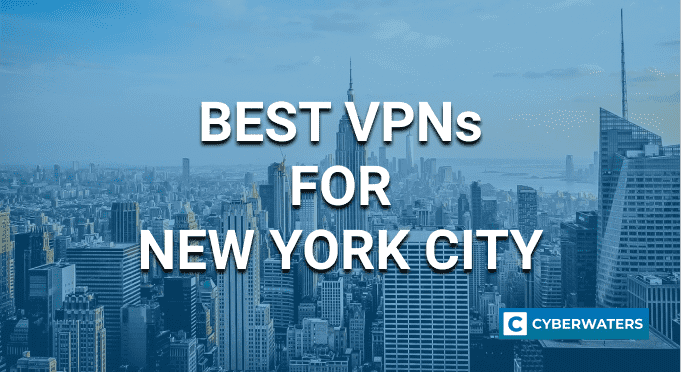 Are you traveling outside of New York City and need to make sure you can access your local sites? Maybe you live outside of the US and just want to access websites and services restricted only to users from this country. With a VPN, you can do so within a couple of seconds.

Plus, even if you live in New York City, a VPN can come in really handy. You can take advantage of the added protection and privacy of having your traffic routed through a secure and encrypted VPN.

A good quality VPN can offer you all of this and much more. It makes no difference what your reasons may be why you need a VPN for New York City. This detailed guide will help you learn everything you need to know and choose the most suitable VPN service.

Here are the best VPNs for New York City:

How to Choose a VPN for New York

The best VPNs for New York stand out from their competition thanks to their features and capabilities. Not all VPNs can offer you the same level of service, so you need to make sure you pick the one that gives you the best performance for your invested money.

Whether you’re in New York or elsewhere in the world, you need a VPN that will work reliably and consistently every time you connect to it. To be sure that the VPN you choose can do this, you have to make sure it has certain features. Here are essential features to look for in a VPN for New York:

NordVPN offers high-quality servers in 15 cities across the US, including New York City. The NordVPN New York server base allows the option to choose from over 300 servers. The service runs obfuscated servers, which hide the fact that you’re using a VPN to reroute your original network. This means no one, including your ISP, can know if you’re connected to a real server or just on your regular network.

What’s more, you even go a step further if you’re privacy-conscious. NordVPN allows its subscribers to purchase dedicated IP addresses. This means you can get a dedicated NordVPN New York IP address that no one else can use. Most VPN users don’t need this feature. But it’s nice to have the option if you’re working with sensitive information systems or run an online business.

Feature-wise, NordVPN offers a robust lineup packed with great tools. This includes in-house features such as CyberSec and the NordLynx protocol. You can also count on standard tools such as a kill-switch, split tunneling, and VPN obfuscation.  Plus, the service comes with simple and streamlined apps with up to six simultaneous connections.

Surfshark offers over 500 servers across 20 US cities, including New York City. The service doesn’t list how many servers are there in NYC exactly. However, we can say that there are at least several dozen options going by the numbers above. Numbers aside, each Surfshark server comes with private DNS, P2P support, and a strict no-logs policy.

In terms of speed and performance, Surfshark ranks among the top services in the industry. It can unblock any US streaming and content platform. It also allows you to connect an unlimited number of devices per single subscription plan. All of this is available for a little over two dollars per month if you opt for one of Surfshark’s long-term plans.

With its high speed, a strong no-logs policy, powerful Kill Switch, and advanced leak protection, Atlas VPN becomes one of the greatest choices when choosing the best VPN for New York. You can easily connect to the New York servers from any device that you use Atlas on. There are no limitations on the number of devices that you can use with Atlas VPN subscription and that’s a great perk for a VPN to have.

Atlas VPN is optimized for streaming so you will be able to watch any show or movie on Netflix, Disney Plus, Hulu, etc. Additionally, Atlas VPN will block potentially dangerous websites. This additional protection helps you avoid phishing, online scams, malware, and other online threats. Good news for gamers too, since Atlas VPN prevents ISPs from interfering with your connection while you play online games.

No need to pay hefty sums to stay safe and private online. Atlas VPN offers the best deals on the market to give you the online privacy you deserve. And a 30-day money-back guarantee, too.

ExpressVPN is often the go-to VPN for users looking for a powerful VPN and can afford to splash a little extra cash for the subscription. This service is powerful enough to unblock any website and works in most regions worldwide. Plus, it also comes with valuable tools such as a kill-switch, split tunneling, private DNS on every server, and many more.

More importantly than numbers, all ExpressVPN servers support a long list of protocols. This includes the super-fast Lightway protocol, OpenVPN TCP vs. UDP, L2TP/IPSec, IPSec, and IKEv2. This diversity provides you with a lot of room for customizing your connections. You can focus on the performance characteristics that you’re aiming for.

Going by server numbers, Private Internet Access firmly holds the number one spot by a long mile. With over 2,500 servers in New York alone, PIA provides a total of 35,000+ servers worldwide. The service supports both WireGuard and OpenVPN protocols and comes with a SOCKS5 proxy included.

PIA is a great choice for both those living in the US and those who want to access US-based servers, like those in NYC. This is because it’s easy to set up, offers many advanced security features, and doesn’t log any user activity. It’s not the fastest VPN on our list but can still offer above-average connection speeds to global users.

PrivateVPN may not be as popular as the other services on the list, but it comes equipped with fantastic features in its own right. Although this service doesn’t publicly disclose the number of their NYC servers, they do have a good selection of NY IP addresses available. We say this because we haven’t experienced any problems, connection drops, or slow speeds while testing the service.

PrivateVPN’s apps come with unlimited bandwidth and speed, port forwarding, IPv4 leak protection, and a kill-switch. It’s based in privacy-friendly Sweden and doesn’t keep any data logs of user activity. Their service is backed up with a 30-day money-back guarantee, so you’re not risking a penny if you decide to try out this VPN.

CyberGhost has a massive network of over 6,900 global servers, including over 1,100 servers in the US. Focusing on New York alone, the service provides over 330 NYC servers, all of them physically located in The Empire State. Moreover, CyberGhost is one of only a few VPNs that support P2P activities on each of its NYC servers.

The service comes with an impressive number of features and a strict no-logs policy. CyberGhost’s notable characteristics include an automatic kill-switch, DNS protection, and 256-bit encryption. It’s also a VPN with one of the most customer-friendly money-back guarantees, spanning over the first 45 days of your subscription.

How to Change Your Location to New York with a VPN

How do I know if I’m connected to a New York VPN server address?

If you’re not sure if you’re really connected to a New York VPN server address, you can easily check it in a couple of seconds. Simply open up a new incognito tab in your browser and type in “What’s my IP” or “My Location”. If you’re properly connected to a VPN server, the results will show that you’re in New York.

Why do I need a VPN in New York City?

Even if you live in New York City, you should consider purchasing an NYC VPN for multiple reasons. Since the US is a member of the Five Eyes alliance, US residents are always under close watch for any suspicious online activities. A VPN with a New York IP address will help you protect your privacy and security.

Can I use a free VPN for New York City?

No, we strongly advise against using a free VPN for New York City. Although there are a handful of free VPNs that offer servers in New York, they are simply not as safe or private as paid services. Plus, since free VPNs often attract many users, their servers are overloaded, so your network speed will be barely usable.

Will I get in trouble for using a VPN for New York?

Using a VPN for New York or any other location in that work is entirely legal. This is, as long as you’re not using it to mask illegal activities or commit crimes. With that in mind, there’s no reason to worry if you want to use a VPN to stream, access restricted content, or simply keep your device safe.

Yes, you can use a VPN in all Unites States. You can get an IP address of cities like Buffalo, Charlotte, San Francisco, or Chicago.

Get a VPN for New York Today!

The best VPNs for New York we’ve discussed on this page will provide you with a wide range of advantages and make your online experience much better. From safe torrenting and streaming to unblocking local sites and claiming discounts and special deals. A VPN lets you take advantage of an unrestricted online landscape.

And, with the information we’ve shared with you, you should have no problem choosing a VPN service that best suits your needs and quickly set it up. We’ve thoroughly tested and reviewed each of the seven VPNs before suggesting them to you. All that’s left is to pick one of our recommended options and enjoy!

Is Torrenting Illegal? How to Not Get Caught While Torrenting
Tejas Nair