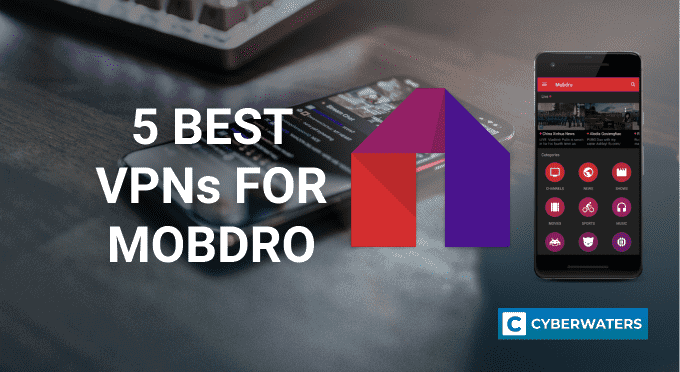 Mobdro has skyrocketed in popularity over the past year. It became the go-to streaming app for many content streamers worldwide, as it’s extremely user-friendly and available without any subscription costs. The problem with it is that it often includes copyrighted content and doesn’t take any responsibility for potential privacy issues that happen to your device.

The best solution for these problems? Using a trustworthy and reliable VPN for Mobdro. Read this thorough Mobdro guide to find the best tips for using this free streaming service and advice on picking the most suitable VPN for Mobdro.

The Mobdro app is a free streaming service popular among Android users. It’s a very intuitive app that collects all free streaming videos in one place and allows you to access all of the content you want to stream without having to constantly hop between multiple free streaming sites.

In other words, it’s an online version of the classic TV viewing concept. You can’t watch shows on-demand like on Netflix or HBO but can switch between “channels” that are streaming at the specific moment to find the content you want to watch.

As you may have assumed is accurate when talking about a platform like Mobdro, the answer to this question is not that straightforward. Since you’re downloading the Mobdro app directly from the site and not from the Google Play Store, there’s really no solid guarantee that the app doesn’t harvest your data and sell it to third parties.

Additionally, this also means that there’s no transparent system in place when it comes to the shows and ads Mobdro features for you. If you accidentally click on a malicious third-party website link or get a fake ad, you can experience problems with your device.

So, with all of these things in mind, how safe is Mobdro? The best way to put it is that it’s as safe as you make it. If you use a VPN service and install an ad blocker on your device, you can be sure that the service is pretty safe and that you won’t experience any privacy or security issues.

Is Mobdro Legal in the UK and US?

The short answer to this is yes, Mobdro is Legal in the UK and the US. A longer answer is that this free streaming service is legal as long as you’re not using it to watch copyrighted content in your location.

From this standpoint, Mobdro, much like many other streaming platforms, falls into a bit of a grey area in terms of its legality. Mobdro’s base operating model is that it searches the online world for free streams. It then arranges these streams into categories for you to conveniently access them. But, when you move into streaming copyright content, you’re venturing into unclear waters and are likely engaging in illegal activities.

With that in mind, the best way to make sure you don’t accidentally get into any legal trouble for copyright reasons is to use a trusted VPN service to mask your real IP address. Moreover, doing so will help you stay safe and private online.

How to Use Mobdro

Using Mobdro is convenient, as you can set up this service quickly and start streaming within minutes. To help you out set it up without any hassle, we’ve created an easy to follow four-step guide on how to use Mobdro:

NordVPN is undoubtedly the best all-around VPN service for streaming on Mobdro. It has over 5,200 servers in 60 countries worldwide, all equipped with the latest and most sophisticated features. This includes the impressive NordLynx protocol, which is up to twice as fast as other protocols.

This VPN can unblock any streaming site and access even the most restrictive regions. It’s highly customizable and available across all major devices, platforms, and browsers. As one of the fastest VPNs around, NordVPN guarantees uninterrupted streaming in which you don’t have to make compromises between speed and security.

On top of all of this, NordVPN is very serious about the privacy of its users. It doesn’t store any personally identifiable information and comes with a highly customizable advanced kill switch. Plus, the service is based in Panama, which is not a part of any international online surveillance alliance and has no mandatory data retention laws.

Launched in 2018, Surfshark has quickly grown to become one of the most popular VPNs in the industry, especially among those users looking for a fast and light VPN service. It currently offers over 3,200 servers in 65 countries worldwide. Besides offering above-average speeds, Surfshark’s servers are also extremely secure, essential when you’re streaming on Mobdro.

Surfshark uses industry-leading 256-bit encryption and employs the IKEv2/IPSec as the default protocol on all of its apps. The service uses only RAM-based servers and employs private DNS on each server. Moreover, you can count on convenient features like Camouflage Mode, NoBorders Mode, and a dedicated kill switch.

As its name suggests, PrivateVPN puts a strong emphasis on the privacy of its users. It uses robust 256-bit encryption and doesn’t keep any data logs on its users. Its server base is not very large but is sufficient to enable Full HD and even 4K streaming. Besides using it for Mobdro, you can conveniently employ PrivateVPN for unblocking any other streaming service you want to access.

This VPN delivers a simple and very easy-to-use Android app ideal for pairing up with Mobdro and offers apps for all other major platforms as well. Lastly, PrivateVPN has an uptime of 99.98%. This makes it an ideal VPN service for streaming content, as you don’t have to worry about annoying connection drops or server issues when using Mobdro.

With several million active users, ExpressVPN is one of the most popular and reputable VPNs in the industry. The service has a solid network that spans across 160 server locations in 94 countries and delivers above-average server speeds. It uses private DNS on every server and utilizes independently audited TrustedServer technology.

What Makes ExpressVPN one of the top VPNs in the business is its dedication to user security. Based in the privacy-friendly British Virgin Islands, ExpressVPN is undoubtedly at the very top when it comes to the most private and secure VPN services. It is a premium VPN and one of the most expensive services in the industry. That said, if you have the budget to subscribe to it, it’s well worth every cent.

Private Internet Access is known primarily for two things. It’s one of the industry veterans, and it has the largest VPN server network in the world. And, speaking of the latter, more servers means fewer crowds and faster connection speeds regardless of your global location. All of this is extremely important when using an online streaming platform like Mobdro.

PIA comes with plenty of advanced features. Most notably, these include world-class protocols like OpenVPN and WireGuard, advanced split tunneling, and a secure kill switch. You can also rely on a strict no-logs policy and opt for an anonymous dedicated IP if you want a static IP address.

Why Does Mobdro keep stopping for me?

Your Mobdro app might have stopped working because of in-app issues. So, the easiest and quickest way to resolve it is to update it. Alternatively, you can also reinstall the Mobdro app. That said, the issue can also be Mobdro APK-wide, as sometimes it goes down and no users are able to access it.

Is Mobdro safe to install?

Mobdro is safe to install but with a small caveat. Since it’s not available in the Google Play Store, it doesn’t pass the same security checks as apps that are in this store. Mobdro has been around long enough and has proven to be safe, just keep in mind that you’re technically downloading a third-party app.

Can I use a free VPN for Mobdro?

You can use a free Mobdro VPN, but we strongly advise you to avoid doing so. This is because free VPN services deliver inconsistent performance and often limit their services in a number of key areas. Moreover, many free VPNs are outright unsafe or have a history of misusing their users’ personal data.

The Mobdro streaming app is a legitimate free service that delivers great content without you having to spend a single cent. That said, it also often includes copyrighted content, as unofficial streams can get mixed into the official streams. Because of this, it’s crucial to be careful and use a VPN for Mobdro to avoid copyright infringement problems down the line.

Plus, using a VPN for Mobdro is the best way to make sure you’re doing so in a safe and private way, without any restrictions. The five Mobdro VPNs we’ve discussed above are all very capable of delivering the perfect streaming experience when using the Mobdro app. With that in mind, if you can’t decide between them, we recommend NordVPN as the best overall Mobdro VPN.