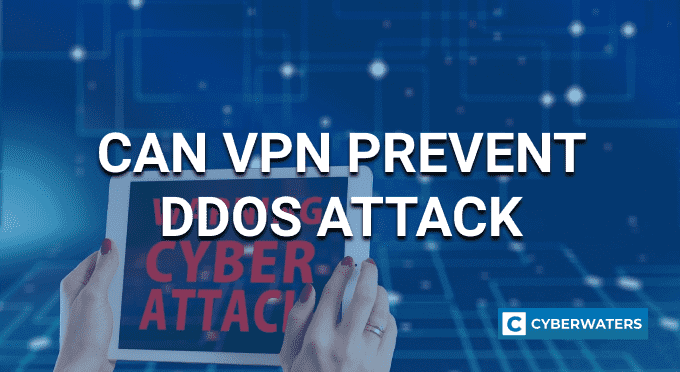 DDoS attacks are extremely annoying – they force you offline and can happen anytime. Some online articles recommend using a VPN, but how efficient is that? Does a VPN actually stop DDoS attacks?

It doesn’t exactly stop them, but it does offer protection against these cyber attacks. We’ll show you how in this article, and also answer other questions.

To find a good anti-DDoS VPN, we recommend reading our full guide. If you’re in a hurry, you can try NordVPN because it’s our number one pick.

What Is a DDoS Attack?

DDoS stands for Distributed Denial of Service. It’s a cyber attack that leaves you without Internet access for an hour or more. Cybercriminals often target businesses with DDoS attacks. But wannabe hackers can also DDoS gamers, streamers, and regular Internet users.

It’s hard to tell you’re dealing with a DDoS attack, but there are some signs to watch out for:

If one or two of the things on that list happen to you once or twice, it doesn’t necessarily mean you’re being DDoS-ed. But if they happen frequently and/or persist for a few hours, it’s likely a DDoS attack.

DoS stands for Denial of Service, and it’s a slightly weaker version of a DDoS attack. Unlike a DDoS attack, a DoS attack will only cause annoying slowdowns or force you offline for a few minutes or an hour.

How Does a DDoS Attack Work?

A DDoS attack overwhelms a network by flooding it with unwanted traffic and requests. To run a DDoS attack, hackers use a network of computers, called a botnet. They add computers to the network by infecting them with malware.

Unfortunately, nowadays almost anyone can rent a botnet to perform DDoS attacks on the deep web – and the prices start at around $10 per hour! So a DDoS-er doesn’t need to be a skilled cybercriminal to force you offline.

Hackers often use one of the following three types of DDoS attacks:

Who Would Want to DDoS You?

Many of you will probably go their whole lives without experiencing a DDoS attack. However, if you’re a gamer or streamer, you’ll likely get DDoS-ed at least once.

DDoS-ing is very frequent while gaming – to the point where upset players DDoS other players just for “disrespecting” them. There are tons of Reddit threads where people complain about getting DDoS-ed while gaming. It looks like DDoS-ing happens a lot in online games that are very competitive – like League of Legends, Fortnite, or Apex Legends.

Also, we found multiple Reddit threads where large and small streamers and their mods complained about DDoS-ing. Sometimes, the streamer might get DDoS-ed day after day, not being able to stream at all.

Can a VPN Prevent DDoS Attacks?

Yes, a VPN can stop a DDoS attack. It’s an online service that hides your IP address from websites and other online users. Without your IP, nobody can target your network with DDoS attacks. If they do that, they’ll just DDoS the VPN instead.

While VPN DDoS protection is real, not every VPN can protect you fully or offer a smooth experience. You should only stick with top providers like NordVPN, ExpressVPN, and PIA. They have large server networks with anti-DDoS protection. Also, they offer bank-grade security, no-logs policies, fast speeds, and easy-to-use apps.

When VPN DDoS Protection Doesn’t Work for You

If the gaming server you’re playing on is being DDoS-ed instead of you, using an anti-DDoS VPN for gaming won’t help. The VPN will only hide your IP address, not the gaming server’s IP. So it can only protect you from a DDoS attack.

Can You Be DDoS-ed with a VPN?

Yes, someone can DDoS a VPN server while you’re connected to it. But that’s not a problem – that’s actually what’s supposed to happen when you use a VPN to stop a DDoS attack. It should hit your VPN server instead of your network.

You don’t need to worry about being DDoS-ed while using the VPN. Hackers have even tried blackmailing VPN providers in the past by threatening to DDoS them if they don’t pay a ransom. The worst thing that happened was a small-scale service disruption, meaning a few servers went down for a day or so.

As long as you’re using a VPN with good anti-DDoS protection like NordVPN, everything will be fine. Even if hackers DDoS the VPN server, their attacks won’t be successful.

Can You Stop a DDoS Attack By Restarting Your Router?

Yes, you can stop a DDoS attack if you restart your router, but only if you have a dynamic IP address. That means you should get a new IP every time you restart the router. As long as the person DDoS-ing your network doesn’t know your new IP, they won’t be able to force you offline.

But this solution isn’t convenient. It’s much easier to use an anti-DDoS VPN instead. With it, you just connect to a VPN server to avoid a DDoS attack. It’s better than restarting your router every time that happens.

What Happens If You Have a Static IP Address?

If you have a static IP, you can ask your ISP to change it if you’re getting DDoS-ed. But we recommend using a VPN to stop DDoS attacks instead. Asking your ISP to change your IP if you get DDoS-ed often isn’t convenient. They might refuse to change it after many requests and ask you to contact the police instead.

Here are some common questions we saw people asking about DDoS attacks and anti-DDoS VPNs on sites like Reddit and Quora:

Yes, DDoS attacks are illegal in most parts of the world, but we can’t vouch for all countries. The legal status of DDoS-ing varies from place to place, so you should google your country’s legal stance on it.

Performing a DDoS attack in a country where it’s illegal like the US or the UK could result in huge fines and prison time.

Can DDoS Attacks Be Traced?

It is possible to trace the origin of a DDoS attack, but it’s very difficult to do it. It might be possible to trace one or two bots, but tracing thousands of bots is pretty much impossible. Forensics like payment trails, the attacker’s motivation, and if a Botnet as a Service are also important for tracing a DDoS attack.

But because the traffic is coming from legitimate sources, it’s really difficult to pinpoint the attacker. Many people whose computers are used in a DDoS attack aren’t even aware that their device was infected and added to a botnet.

Usually, it’s much easier to trace a DoS attack because it originates from just one device.

Can DDoS Be Prevented?

There are tons of tips about how to prevent DDoS attacks, but all of them are for website owners and businesses. Using a Zero Trust security model and analyzing the network traffic isn’t something an average online user can do. The best way to prevent a DDoS attack in that situation is to use a VPN.

That way, only the VPN will be DDoS-ed. Your network will be safe, and you’ll continue to have Internet access.

How Does a VPN Stop DDoS Attacks?

A VPN doesn’t exactly “stop” a DDoS attack – nothing can actually do that. But a VPN can protect you from DDoS attacks by hiding your IP address. Without it, the attackers can’t target your network to DDoS it. They’ll only be able to see the VPN’s IP and DDoS the VPN server you’re using.

As for how a VPN hides your IP, its servers act as middlemen between you and the Internet. Instead of your connection looking like this:

So anyone you interact with on the Internet will think all your traffic is coming from the VPN server. This is why they’ll only see the VPN’s IP address.

How to Stop a DDoS Attack

The easiest way to stop a DDoS attack is to use a VPN – here’s how:

Does a Free VPN Help Against DDoS Attacks?

Yes, a free VPN can prevent DDoS attacks, but we can’t say how reliable it is. Most free VPNs aren’t safe to use, so they likely don’t have good anti-DDoS protection on their servers. They’ll protect you from getting DDoS-ed, but you’ll still be left without Internet access if the VPN server is successfully DDoS-ed.

If you really want to use a free VPN, we suggest trying ProtonVPN. It’s a very secure VPN with anti-DDoS protection that has legitimate paid plans alongside the free plan. It’s also one of the only VPNs that offer unlimited bandwidth on its free plan.