Does VPN Protect You from Computer Viruses? 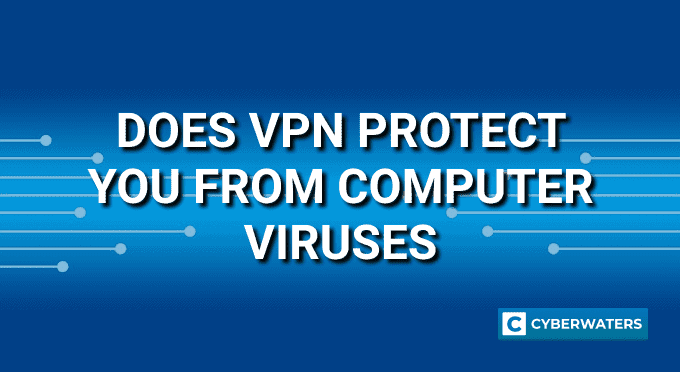 Using a VPN comes with online security benefits. It changes your IP address, hides browsing activities from ISP, and allows you to access censored content. A strong VPN encryption is what protects your data from hackers.

But there are more online threats, like computer viruses, that hackers use to infect your devices. Does a VPN work as an all-in-one solution from types of malicious attacks? Unfortunately, it does not.

To uncover why is that, let’s first take a look at what kind of malware there is.

What Are the Different Types of Malware?

Malware is a piece of software that cyber attackers use to access victim’s devices. In most cases, the malicious program steals information, damages data, and disrupts a system’s normal work.

There are numerous types of malware. Understanding the differences between them will make you more aware of how to protect yourself. The list below highlights some well-known malware types:

How Can Computer Viruses Infect Your Laptop or Phone?

Viruses spread via infected websites, file sharing, or email attachments. Viruses remain dormant until a user activates an infected file or software. Once the user opens a host file or program, the virus replicates and spreads to other computers on a network.

Computer viruses compromise system files and destroy confidential data. They also affect applications and hardware, in consequences causing damages worth billions. Logging keystrokes and collecting sensitive information like user credentials and financial records is also what a virus can do.

Some viruses can use your contact list to send spam to your contacts this way infecting them too. In serious cases, the malicious program grants hackers remote access to a computer.

Does VPN Protect You from Viruses?

A VPN does not protect you from viruses or other malware on its own. It only secures your online traffic and makes it private, without affecting your downloads. A VPN can save you from malware infections in an indirect way. For example, some VPN providers have features that can block malicious websites or ads.

A VPN routes your device’s traffic and internet connection through a VPN server. It masks your IP address and encrypts communication making it unreadable to unauthorized parties. But, it does not modify or inspect your files in any way. This working mechanism cannot protect your device from viruses as this malware can be a part of your downloaded files.

A VPN works on an active Internet connection while a computer virus can damage systems even when you’re offline. A VPN is not suitable to hunt or remove malware from your device, but it makes it more difficult for attackers to hack your systems.

As mentioned, some VPNs do have defensive features that can block malicious websites. When the known malicious IP addresses are blocked it can protect you by limiting access to such websites, thus preventing the infection. Also, even if your device is infected, a VPN can possibly block malicious communication that sends your data to the attacker, if the destination IP is in their blocklist.

Do You Need an Antivirus If You Use a VPN?

To fully protect yourself from viruses you should use a VPN alongside antivirus software. A VPN would protect from attacks that specifically target a device. At the same time, an antivirus will actively scan the device for malware and protect it from infected files.

A VPN prevents attackers from seeing your device’s IP address and location. This makes it difficult for a hacker to send a virus through the Internet. Besides, some VPNs can automatically detect and block sites that host malware or phishing scams.

How to Know If Your Device Is Infected By a Virus?

Your device might have a virus if you notice the following symptoms:

If you suspect your device is infected, you can scan with an updated antivirus program. An antivirus maintains a list of all known viruses. The software identifies every digital file, including a virus program, by a hash stored in a downloadable database.

How to Protect Yourself From Computer Viruses?

You can follow these recommendations to prevent viruses from infecting your device. The steps allow you to use a VPN alongside antivirus software.

A virus is only one type of malware that can change how a device operates. Viruses replicate when a user performs specific actions like opening a file, running a program, or clicking a link. They spread through malicious attachments and links. In some instances, a virus can hijack an email address and spread itself to other contacts.

Some of the popular types of viruses include:

Hackers spread viruses to steal sensitive information and make computers unusable more than ever. Your privacy is at risk, and a VPN is a great choice to protect it. But, VPN does not protect you from viruses directly. It acts as a proactive measure to prevent various online threats. To fully protect yourself from online threats you should always use a VPN alongside an antivirus.

Here are some of the best VPNs that can block malicious websites: