Does VPN Use More Battery and Drain Your Phone Faster? 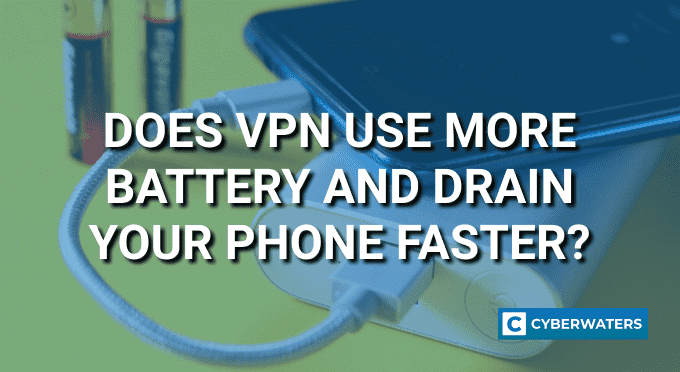 If you depend on your Android or iOS phone, battery life is likely one of your top concerns. Even as smartphones get larger and more efficient batteries, battery consumption is still an issue. Most of us still do everything we can to get through the day or at least from charger to charger without our phone dying. As the capacity of batteries increase, bigger displays and more power-hungry apps continue to affect battery life and drain the battery on our devices.

Another top concern for Android and iOS users is security. One of the best ways to keep your information secure when using your phone is using a VPN. But does VPN have an impact on battery consumption? If so, why? Exactly how much will using a VPN affect battery life? Finally, how can you save battery life while using a VPN?

Does VPN Drain the Battery on Your Phone?

Yes, it does. Exactly how much depends on several factors. Using a VPN on your Android or iOS device can consume anywhere between 5% and 15% more battery than without. Remember that any app running on your phone will impact battery consumption, especially apps that run continuously in the background.

Why Does VPN Drain Battery?

How Much Battery Does VPN Use?

You can expect your battery usage to increase by 5-15% when using a VPN on your phone. There are different ways how VPN use affects battery consumption. Your results will vary by the phone, the service you use, and your proximity to WiFi or a mobile tower. If you are using a weaker encryption standard, have a phone with hardware acceleration for encryption, have constant access to a strong data signal, and have the right VPN, your battery consumption could be on the low side of that range. There are also some ways to reduce how a VPN will affect battery life.

How to save battery with a VPN

Here are some VPNs that are battery-effective on iOS and Android devices:

VPN apps do not drain more battery than any other app. They usually increase battery usage from 5% to 15% on your phone. The consumption depends on the phone type, signal strength, encryption use and the device performance. One way you could save up some battery is to use a VPN that is optimized for your phone, or install a VPN on a router.