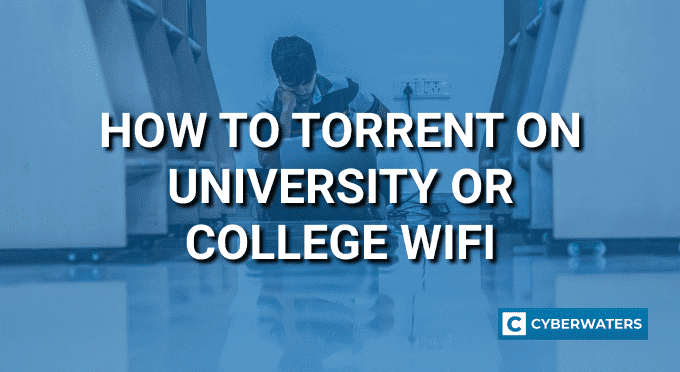 You probably noticed that there are restrictions when using WiFi on campus. Some websites are inaccessible or apps are blocked. One annoying rule is that torrenting on University WiFi is not allowed.

Needless to say, all your browsing activities are being watched by an administrator. Luckily, there is a safe and private way to use torrents on college or university campuses.

Often torrenting sites on university or college WiFi are blocked. Your college network administrator or even ISP may limit access with firewall rules. To unblock and access torrenting sites in University you need to use a VPN. It will allow you to bypass the restrictions and access any website on the internet.

How to Unblock Torrents on University WiFi

Even with a VPN, you have to take extra measures to prevent exposing your P2P traffic. You might get caught torrenting if any IP address or DNS leaks accidentally happens.

University or college are educational institutions and they must obey the law. The administration takes restrictive measures such as blocking torrenting whatsoever. This means that you are not allowed to download music, movies, or even stream on some platforms.

Using a VPN on college WiFi would unblock torrenting no matter what P2P client you use. A VPN is an essential service to safely and securely download torrent files on any WiFi. It would hide file-sharing activities from network administrators and ISP.

One essential setting that you must always use is an Internet Kill Switch. It is a feature that protects you from IP leaks that could identify you and your internet activities.

Important notice! Always connect to a VPN server first before starting a torrent client. It will protect you from leaking your IP address and hide the use of torrents.

Always quit your torrent client first before disconnecting from the VPN server too!

NordVPN is the best VPN for torrenting on university WiFi. It has more than 5600+ servers in 59 countries around the world.

Many servers are P2P optimized and unblock torrents with ease.

The service has 2 kill switches for your safety and privacy :

NordVPN has next-generation encryption and a new NordLynx protocol. It is based on WireGuard which greatly increases the download speed when torrenting. Besides lightning-fast speeds, it also has a strict no-log policy.

It can unblock many streaming services such as Netflix, Hulu, Popcorn Time, and many more.

If you have ever been bothered by online ads, this VPN can block those too with its CyberSec feature.

All NordVPN’s plans come with a 30-day money-back guarantee.

Surfshark is an excellent choice for downloading torrents on college WiFi. It’s a very affordable and feature-packed VPN service.

It has more than 1700+ P2P-friendly servers in 63+ countries and great speeds.

This service is full of features:

It uses AES-256 bit encryption, does not keep any logs, and has an Internet Kill Switch. The service supports WireGuard, OpenVPN, IKEv2, and Shadowsocks protocols.

Surfhsark has a 30-day money-back guarantee for all its very affordable plans.

ExpressVPN is another fantastic choice for college students. It has more than 3000+ VPN servers in 180+ locations and it just works when it comes to unblocking torrenting.

The service has excellent security features like RAM-disk servers and a strict no-log policy. Also, an essential Network Lock (Kill Switch) feature on all apps.

ExpressVPN is one of the fastest services that reach excellent download speeds. It will allow you to stream Netflix or Hulu without lag and in HD quality.

This VPN provider supports most devices and OS as well as TVs. It allows sharing 5 devices at once.

There’s a 30-day money-back guarantee on all ExpressVPN’s plans.

CyberGhost is a popular choice among VPN users. It has the largest server network out of all VPN providers with over 6300+ servers in 89 countries. Many servers are P2P optimized that can unblock torrenting on college WiFi.

This provider supports many protocols such as OpenVPN, L2TP, IKEv2, and WireGuard.

As it is based in Romania it keeps no logs on any of their servers keeping your connections private.

Internet Kill Switch is also there and this service has no IP or DNS leaks.

This VPN works with Netflix and other streaming services and can stream movies in HD.

PureVPN is a very affordable and great choice for college students. It is one of the few services that offer a port forwarding feature for those who want to torrent.

The VPN has multi-protocol support and advanced features such as:

PureVPN can unblock streaming services too and has an easy-to-use browser extension.

A VPN not only unblocks torrenting but also hides it on a college WiFi. It encrypts all your internet traffic from your device and routes it to a VPN server. The only thing that a network administrator or ISP can see is that you connect to a VPN server. Torrenting and internet browsing becomes private and hidden.

College WiFi often restricts access to websites or blocks torrents. The easiest way to bypass these limits is to use a VPN. It would hide your browsing and unblock torrents so you can file-share freely and in private.

Here are some of the best VPNs for torrenting on University WiFi: