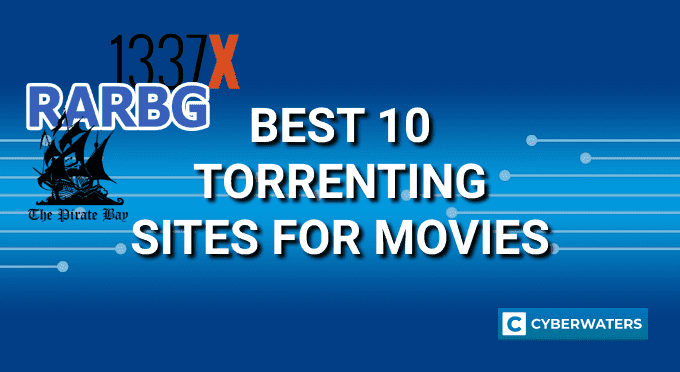 Torrent sites are great places to find free movies, but they also carry some risks. Using the wrong site can lead to malware, slow download speeds, and difficulty finding the movies you want. However, on the best torrent sites, you can quickly download movies that are still in theaters and can’t be found elsewhere, including Bollywood hits.

All of the torrent sites on this list have proven track records. They’re safe, offer a variety of old and new movie torrents, and have great download speeds. Don’t risk downloading from a shady website and stick to our list of the 10 best movie torrent sites.

These VPNs will protect you when downloading movies:

There are a few things you need to keep in mind when looking for top movie torrent sites. First, pay attention to how many seeders and leechers on the videos you want to download. Seeders are the number of people who have the file available for download, and leechers are the downloaders. More seeders and fewer leechers equal faster download speeds. Therefore, it’s ideal to torrent movies with high seeds and fewer leeches.

Security is another issue, as torrents are notorious for hiding malware. Reddit is a good resource for finding recommended sites that won’t infect your computer and have plenty of trusted uploaders. The number of torrents on a site is another thing to consider. Websites with plenty of files available are more likely to have the movie you’re looking for.

When making this list, we considered all of these factors. Each of these sites is relatively safe from malware (no site is 100% secure), have loads of old and new movie torrents available, large numbers of seeders, and have been recommended by Reddit users.

Over the last several years, RARBG has been one of the most popular torrent websites in terms of users. The website specializes in English language content, but also has some Hindi, Spanish, and other foreign films. RARBG excels when it comes to downloading the latest Hollywood releases at faster than average speeds thanks to the high number of seeders.

It’s one of the top recommended sites on Reddit due to its vast library and excellent download speeds. The content on RARBG is generally pretty safe when it comes to malware. However, when using any torrent site, it’s a good idea to have antivirus software installed.

The Pirate Bay has been around since 2003, and despite a number of lawsuits, domain seizures, and the arrests of its founders, the site is still going strong. On The Pirates Bay, you can find just about any movie you’d like, from newly released Hollywood blockbusters to classic Bollywood hits. According to Reddit’s best movie torrent sites list, The Pirate Bay is number one.

The most popular movies featured on the site usually have thousands of seeders, so the download rates are pretty fast. Less popular or older flicks tend to download a little slower but at least they’re available. While there are issues with some files being infected with malware, it isn’t common. As long as you stick to trusted uploaders (look for the green skull and crossbones) you should be safe.

1337x is the third most popular torrent site online, as well as the third most recommended on Reddit’s best torrent site list. It’s an excellent place to find popular movies from across the globe, including Bollywood hits like Sanju and new American releases such as Tenet.

Many of the more popular releases on 1337x have well over 10,000 seeders, so download speeds are fast. The website is generally pretty safe but malware-infected files are present so it’s best to use caution.

YTS, also known as YIFI, was a torrent release group that specialized in HD movies with relatively small file sizes. While the original YTS site no longer exists, YTS.mx is its unofficial replacement. This torrent site hosts nothing but movies, all compressed to easy to download file sizes, and mostly in HD quality. The movies include popular hits from the past, new releases, and international films from places like India and Japan.

The number of seeders on YTS.mx is pretty high for recent releases but can get pretty low for older films. That being said, the download speeds are generally pretty fast. According to users on Reddit, the files here tend to be free of malware but some of the ads are potentially dangerous so it’s a good idea to use an ad blocker.

MagnetDL is another one of Reddit’s most suggested torrent sites. While it doesn’t have as many seeders as some of the more popular websites, the download speeds are still pretty good.

Malware is not unheard of on MagnetDL, but you should be safe if you stick to downloading movie files with plenty of seeders and use reliable antivirus software. The site hosts movies in a variety of languages, including English, Chinese, Hindi, and Spanish. You can find both popular new releases and classics from a variety of countries here.

Torlock is a great place to find international releases, especially when it comes to the latest releases from places like India and China. Here, the number of seeders reaches the thousands and many files have far fewer leechers making for decent download speeds.

While the website does make Reddit’s top torrent sites, it is pretty low on the list at 13th place. The movie files on MagnetDL should be safe from malware, but it’s still a good idea to run them through a virus scanner and to use an adblocker when navigating the site. The site has all the movies you’d expect to find on a torrenting site, including popular hits and some more obscure releases.

Zooqle features an easy to navigate interface that looks better than many other popular torrent sites. The movies are listed with images of their promotional posters, and when you click on them, you’re given several downloads to choose from with different quality options and numbers of seeders. You can quickly spot the faster downloads with a bar showing the number of seeders versus leechers set to the right of each download link.

The movie files on Zooqle are generally safe from malware, but the ads can contain viruses so make sure to use an adblocker. You can find loads of popular classics here, as well as new releases both from Hollywood and Bollywood.

The original KickassTorrents site was shut down and its owner arrested back in 2016 but a new version popped up later that year. The site hosts thousands of movie torrents, some of which have upwards of 20,000 seeders. There’s even a subreddit dedicated to the site with over 17,000 members.

On the site, you’ll find just about any movie you can imagine, from new Hindi releases including Bhoot Part One: The Haunted Ship to US classics such as Aliens. KickassTorrents is considered a safe place to download movies when it comes to malware, but like any torrent site, it’s not entirely free from infected files.

According to Reddit, LimeTorrents is 7th in its list of the top movie torrent sites. With over 2 million available, the site hosts an impressive amount of the best movie torrents. These include recent hits and classics from around the world. Here, you can easily torrent movies with high speeds, as many films have tens of thousands of seeders.

Compared to many other top movie torrent sites, LimeTorrents’ Indian films tend to have far more seeders. In terms of malware, this website is safer than many alternatives, especially when it comes to its movie files.

GloTorrents doesn’t host as many movies as other torrent sites, but it does feature a decent selection. Of its 1,000+ films, you’ll find mostly new movie torrents, but also foreign flicks and some popular classics. This includes famous Indian features such as Ludo.

The website is on Reddit’s list of best movie torrent sites, but it’s closer to the bottom than the top due to its small library. LimeTorrents does have high numbers of seeders on many of its files, but often with a decent, although lower, amount of leechers as well. You shouldn’t encounter much malware on LimeTorrents movie files, but it does have some questionable redirects in its advertising.

The answer to this question can be summed up pretty quickly, use a VPN. When downloading torrents, your internet service provider (ISP) can easily see what you’re up to. This can lead to a disruption in your internet service or even legal issues in more extreme cases. It doesn’t matter if you torrent movies on Mac, PC, or Roku, your ISP can see what you’re doing without a good VPN running.

A VPN will encrypt your online activities and reroute your connection through one of the service’s private servers. This effectively hides your internet activity from governments, corporations, hackers, and your ISP. Therefore, when you’re using a VPN, no one but you will know how many torrent files you’re downloading and keep you safe from any possible consequences.

Not all VPNs are created equal. While there are some free options available, these services aren’t sufficient when it comes to downloading torrents. The top three VPNs available for torrenting are NordVPN, ExpressVPN, and Surfshark.

Connecting to any VPN will slow down your internet speed. However, NordVPN offers some of the fastest speeds among its competitors and has no bandwidth limits. Additionally, the service passes DNS leak tests and has a solid no-log policy so your traffic will stay private.

It uses uncrackable AES encryption with 256-bit keys to ensure your data stays secure from both your ISP and hackers alike. The service also has a malicious website and ad blocker, known as CyberSec for increased security. NordVPN also offers hundreds of servers designed specifically for P2P file sharing, such as downloading torrent files.

Surfshark isn’t quite as fast as ExpressVPN or NordVPN, but it still offers some impressive download speeds. The service can be connected to your router as well, allowing you to torrent movies on Roku or any other device on your network. Surfshark protects your privacy with a strict no-log policy and Camouflage Mode, which hides your VPN usage from your ISP.

You also get some great security features with Surfshark, including a kill switch, leak protection, and AES-256-GCM encryption. The company offers specialized P2P servers for torrenting which you’ll connect to as soon as you start up a P2P app.

ExpressVPN offers 160 servers across 96 countries, all giving you unlimited bandwidth. Its Speed Test feature will help you find the fastest server to connect to so you’ll always get the best possible download speeds. The company never logs any of your online activities or DNS queries to help maintain your privacy.

Regardless of what movie you intend to download, there’s a good chance you’ll find it on any of the above sites. However, The Pirate Bay and RarBG will give you the largest selections. Whenever you use these sites, you always need to have a VPN active. Without one, you’re running the risk of losing your internet access and possibly getting fines and litigation.

It’s also a good idea to have antivirus software and an adblocker installed every time you download torrents. If the proper precautions are taken, you can use the above sites to access all the free movies, software, and television shows you like.