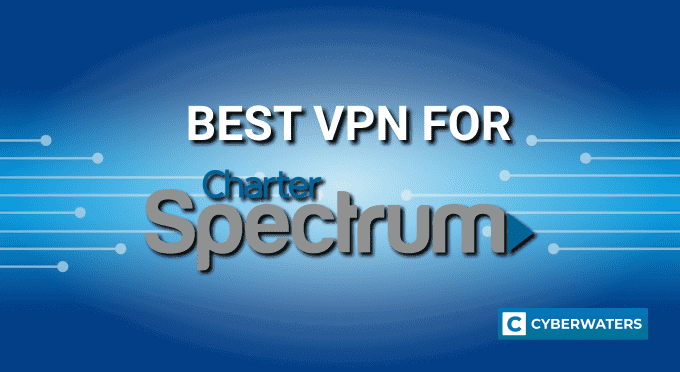 But, like any significant conglomerate, Spectrum is no stranger to problems like bandwidth throttling, blocking streaming sites, and issues with torrenting. From the user’s end, all of these can, fortunately, be avoided by using a VPN. This is, providing you pick a trustworthy one.

Here are the best VPNs for Spectrum:

Can I Use a VPN With Spectrum?

Yes, you can use a VPN with Spectrum without any restrictions. While Spectrum doesn’t necessarily allow VPN use over its services, this ISP doesn’t really have any mechanisms in place that would prevent you from using a VPN service when connected to their servers.

This is excellent news for Spectrum users in terms of privacy and security. You can freely use a reliable VPN to mask everything you’re doing online and protect your sensitive information from falling into the wrong hands.

It also means you can torrent freely, stream Spectrum TV content, and avoid bandwidth throttling without any fear of Spectrum blocking your VPN. With that in mind, we’ll discuss each of the aspects separately to get a better insight into how a Spectrum internet VPN works.

Spectrum TV and VPN Services – Can you Stream on Spectrum with a VPN?

As an internet service provider and an online streaming service all in one, Spectrum inherently suffers from issues related to copyright laws. For these reasons, they often have to geo-block content that’s not in line with specific regulations. Using a Spectrum TV VPN, you can effectively go around these blocks and access everything you want without any restrictions.

We have to mention that there have been some examples of Spectrum clamping down on VPN users and restricting their access attempts. However, these Spectrum VPN issues are only minor and won’t affect your experience in any significant way. You can resolve them by switching between servers to find one that works well on the platform.

Spectrum and Torrenting – Are you Safe when Using a VPN?

When it comes to torrenting with a VPN for Spectrum, the situation is significantly more severe than streaming. This is because you’re also risking hefty fines and possibly even jail time by infringing the Digital Millennium Copyright Act. And, concerning this, Spectrum doesn’t shy away from sending DMCA takedown notices to users who torrent over their network.

There are several examples online of users who got in trouble for torrenting with Spectrum as their ISP. If you don’t want to put yourself in a similar situation, the best way to torrent on Spectrum’s network is to use a trustworthy VPN for torrenting..

We heavily underline the trustworthy part, as you always need to have peace of mind that your VPN isn’t compromised or leaking out your data. Not all VPNs are of the same quality and can offer you the exact features you need for secure and anonymous torrenting.

Plus, even when using a VPN, you can quickly get busted and get a DMCA for torrenting if you’re not careful. That said, there are several tips to keep in mind if you’re using Spectrum as your ISP and are torrenting with a VPN:

Does Spectrum Throttle Its Users Bandwidth?

Although there’s a lot of mystery surrounding the topic of bandwidth throttling, evidence over the years has shown us that most ISPs, including Spectrum, undergo the practice of throttling bandwidth. In most cases, this is to ensure consistent speeds across their service for all users. In some cases, ISPs go overboard with throttling user bandwidth and can make the connections borderline unusable at times.

Using a VPN for Spectrum is a simple but very effective way of bypassing bandwidth throttling. As you’re masking your real IP location with a VPN, Spectrum won’t be able to track your actual address, and you’ll be able to enjoy the full network speed you’re guaranteed in your Spectrum contract.

Setting up a VPN to use with Spectrum is not a complicated undertaking, as you can complete it in just a couple of minutes. To help you out, here’s a quick guide on how to set up your VPN for Spectrum:

The first thing you need to do is sign up with a trusted Spectrum VPN and download the appropriate app for your device. Pick one of our tested and verified VPNs from Spectrum featured on this page. Ideally, we recommend choosing NordVPN, as it’s the most capable Spectrum VPN.

Once you’ve completed the registration process, open your VPN app and log into your account. When there, the next thing to do is to choose the appropriate server. If you’re going for maximum speed, we recommend picking a nearby server location.

3. Connect to the Server

After you’ve completed the first two steps, click to connect to the VPN server. You’ll need to wait a few seconds for the connection to establish. When you get the prompt that you’ve successfully connected to the internet, you enjoy private and secure browsing!

How to Set Up A Spectrum VPN on a Router

Perhaps you want to use multiple devices and want convenient access at all times. In this case, it’s best to set up the Spectrum VPN on your router. That way, all devices connected to the router’s network can enjoy the same benefits.

With that in mind, here’s how to set up a Spectrum VPN on your router:

The VPNs we’ve shortlisted on this page all come with necessary features that make them very efficient when paired up with Spectrum’s service. Let’s take a closer look at each of the top five Spectrum VPN services:

Based in Panama, NordVPN offers a fantastic service for all privacy-oriented users who want to torrent, stream, and browse completely in the shadows. Besides being based far away from any international intelligence alliance, NordVPN also has a 100% zero-logs policy.

This VPN has close to 6,000 servers in 59 countries worldwide. More notably, since Spectrum focuses on the US, NordVPN for Spectrum will provide you with close to 2,000 US servers spread across 15 locations all over the country.

The service is fast, reliable, and more than capable of protecting you against any connection drops and data breach attempts.

With a strict no-logs policy, built-in kill-switch, and private DNS and leak protection, Surfshark ticks all of the boxes and deservedly ranks as one of the top VPNs for Spectrum. Plus, Surfshark also uses industry-leading AES-256-GCM encryption, capable of securing all of the incoming and outgoing data.

The service also allows you to connect an unlimited number of devices at the same time. Another significant reason why Surfshark is such an excellent choice for Spectrum is that all of their servers support P2P activities. This is something you won’t find at many other VPNs on the market.

Atlas vpn offers unlimited bandwidth, autoconnect features and a military-grade encryption – all that and more at a budget friendly price. With streaming optimized servers this is one of the best VPNs for Spectrum.

Moreover, this vpn ensures the best speed utilizing the ​​WireGuard® protocol and with the best location detector feature it will hand pick the ideal server for you according to distance, speed and latency. Bypass regional blocks from anywhere in the world and connect as many devices as you wish – the limit does not exist.

While being one of the cheaper options on the market, Atlas VPN will ensure a smooth streaming experience. Try it out at no risk with a 30 day money back guarantee.

PrivateVPN is one of the most capable and reliable VPN services in the industry. Plus, it offers a vast selection of servers, including those in some of the biggest US cities. Equally important in the context of this page, PrivateVPN offers its users unlimited bandwidth and unlimited server switches, allowing for convenient and user-friendly VPN use.

PrivateVPN comes packed with features that make it an excellent service, especially for those Spectrum users who wish to torrent or stream online content frequently. You can rely on port forwarding and make your network even more secure and adept for fast-speed online activities. Moreover, the service has a Stealth VPN feature that enables you to go around even the toughest VPN blocks and DPI firewalls.

ExpressVPN maintains the reputation as one of the top VPNs in the industry, mainly because they excel in handling every issue thrown their way. And, when it comes to ExpressVPN’s Spectrum capabilities, the case is no different. Split tunneling, kill-switch, private DNS on every server, and a zero-logs policy are just some of the features you can count on when using this VPN.

Focusing on their US server network, ExpressVPN offers servers spread out across locations all around the country, in over a dozen major US cities. ExpressVPN does come at a slightly higher price than the competition, but it’s proven time after time that it’s worth every penny.

A Brief Sum Up

If you’re using Spectrum as your ISP or want to stream content from their online platform, using a VPN is always the best way to go about it. It will allow you to hide your real browsing data from the ISP, torrent anonymously, and avoid any region-locks and geo-restrictions.

Each of the five best VPNs for Spectrum we shared with you on this page is more than capable of providing you with all of these features. Ultimately, it’s on you to pick which of the above-features VPNs best suits your needs, budget, and feature preferences.