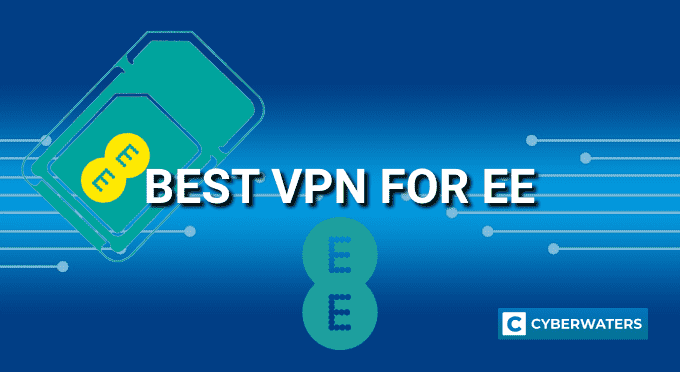 EE is one of the largest internet service and mobile network providers in the United Kingdom. It might be difficult to choose the best EE VPN for this ISP.

Some people complained about slow or blocked VPN connections when using EE services. Luckily, there are a few best VPN services that stand out from the crowd and work best with EE.

Here are the best VPNs for EE:

Can you use a VPN with EE?

VPN usage is not forbidden in the UK, which means you can easily use it with EE. But, some people report EE is blocking their VPN connections. Those people mostly had specific network setups. This ISP is known for throttling and monitoring your connections so you need an advanced VPN for EE.

Why should you use a VPN for EE?

It is well known that ISPs in the UK are limiting internet traffic in some way or adding censorship. Many of them are blocking access to some websites or content you might want to reach. Luckily using a VPN for EE in the UK comes with benefits:

Throttling is a very common practice among the biggest ISPs in the UK. It means that EE limits your speeds when accessing certain websites or services. Sometimes EE throttling can become so drastic that it’s impossible to browse. This often happens when using P2P, downloading files, torrenting, or streaming videos.

A VPN makes it impossible for EE to detect which service or website you are trying to access. It hides all your internet activities from ISP and prevents EE from throttling.

Most ISPs log and track your connections and online behavior. They know when and where you connect all the time. Using a VPN with strong encryption would prevent EE from knowing what you do online. It would hide the data like visited websites, services used, or downloaded files. Your browsing would be private and the government, ISP, or snoopers could now know what you do online.

Certain content and websites are commonly blocked by EE and other ISPs in the UK. Using a VPN would circumvent any restrictions and allow you to access any websites you want. IT could unblock American Netflix, and many other streaming services too. Even the websites you visit could not identify you since they only see the VPN server’s IP address.

With strong encryption, a VPN hides all torrenting and P2P activities from EE. A VPN is the best way to protect yourself from getting caught for torrenting. With a VPN ISP can not see what files you download and from where.

Many VPNs have their apps for mobile devices as well. It does not matter if the 4G network belongs to EE or another ISP. Using VPN over 4G would bring the same benefits as via WiFi. The best VPNs work on a mobile network without any problems.

The Best VPNs for EE ISP

NordVPN is the best VPN for EE. It has more than 5400 servers in 59+ countries. It keeps no logs and has lightning-fast speeds.

The speeds come from its new and modern WireGuard-based protocol called NordLynx. It also supports other protocols like OpenVPN and IKEv2 with AES-256 encryption.

NordVPN has apps from Windows, Mac, iOS, Android, and Linux. All apps work with streaming services like Netflix or BBC iPlayer. There are specific apps for SmartTVs and you can configure NordPVN on EE router.

The service fully supports P2P and torrenting. For your protection, it has an Internet Kill Switch and IP leak protection. It can also block online ads and malicious websites.

Surfshark is by far the most feature-rich VPN service. It has Internet Kill Switch, ads blocker, split-tunneling, and can hide VPN traffic. It also supports Shadowsocks protocol that allows bypassing any censorship.

1700+ servers in 60+ countries are available to use on an unlimited number of devices. You can connect as many as you want with a single account.

The apps work on every OS – Windows, Mac, Linux, iOS, Android, and Wifi Routers. It supports P2P, torrenting, and can unblock many streaming services.

For secure browsing, it uses AES-256 encryption and has no IP leaks. It also has a no-log policy and keeps no personal data.

Surfshark also offers a 30-day money-back guarantee on its all very affordable plans for you to try.

Atlas VPN offers high-quality services and ensures your privacy with its strong no-logs policy, as well as with advanced leak protection and private DNS that you can use at your disposal. You’ll be glad to know that Atlas VPN also has a splendid tracker blocker and a powerful kill switch which are very important when choosing the best VPN for EE ISP.

Atlas VPN is suitable for torrenting since P2P is allowed and you can also use this great VPN on various streaming platforms since Atlas VPN is optimized for streaming. You can also bypass geo-restrictions when choosing IPs from more than 750 servers in 27 locations around the world.

What is more, Atlas VPN offers one of the best deals in the VPN market for its subscription, so you can be sure to get advanced services at an affordable price with a 30-day money-back guarantee.

PrivateVPN might not be the most sophisticated or feature-rich VPN we’ve listed on this page. However, it comes with a specific set of characteristics that make it a great choice for EE. It’s fast, light, and offers a great server base spread across over 200 server locations. Moreover, it’s great for torrenting, as it allows P2P activities on all of its servers.

From the user’s perspective, you can count on a streamlined and very intuitive VPN client. This is true for all supported platforms. Even so, there’s a good set of settings and options available to you. Most notably, this includes a kill switch, DNS leak protection, and IPv6 leak protection.

On top of all of this, if you opt for one of its long-term plans, you can get PrivateVPN for just a few bucks per month. This makes it one of the most affordable choices on the market. Not only this, but all of its plans come with a 30-day money-back guarantee.

ExpressVPN is one of the best VPNs on the market that truly stays to its slogan – “The VPN that just works”. It is one of the most trusted and privacy-focused services in the industry.

It has access to 3000+ servers in 160+ locations with an in-build speed test on Windows and Mac apps. You can use it on Android, iOS, Linux, or routers too.

ExpressVPN does not keep any logs and routes your traffic to RAM disk servers. It also has best-in-class encryption and multiprotocol support.

When it comes to streaming, it is one of the best choices to watch Netflix or Hulu. The service has great speed so you can stream in HD.

ExpressVPN has a 30-day money-back guarantee for all subscriptions.

The best services should be able to circumvent censorship and EE throttling. Strong encryption and no-logs policy are essential features for the VPN to have.
Our top recommended choice is NordVPN as it has everything you need for full privacy and amazing speeds.