How to Watch ZEE5 in the USA 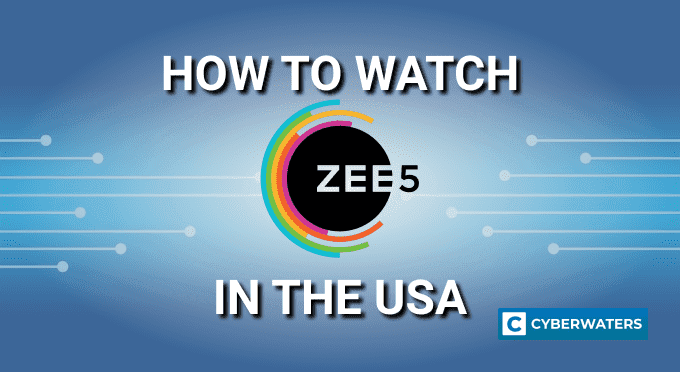 ZEE5 is the perfect streaming platform for people who love Indian entertainment. But you can’t use the site in the US because it’s not available there. You have to settle for the few channels that are available through DISH instead.

But we’ll show you an easy method to unblock ZEE5 in the USA. Also, we’ll answer some FAQs.

Here’s how to watch ZEE5 in the USA step-by-step:
Visit NordVPN!

What Is ZEE5 & Where Is ZEE5 Available?

ZEE5 is a popular streaming platform you can use to watch tons of Bollywood movies and other regional Indian cinemas. ZEE5 boasts 90+ live TV channels and over 100,000 hours of content. The service is free to use, but it also has a paid plan.

At the moment, ZEE5 is available in over 190 countries.

Is ZEE5 Available in the USA?

No. If you try to connect to ZEE5 from the USA, you’ll see this geo-blocking message:

How Do You Watch ZEE5 in the USA?

To do that, you need to trick ZEE5 into thinking you’re from a different country. The easiest way to do that is to use a VPN. It will hide your IP, so ZEE5 won’t be able to see your location. It will only see the VPN’s IP and its geo-location. The easiest way we can explain how that works is with this quick sketch:

Since ZEE5 is available worldwide, you can use a VPN server in any country you want. But you might get access to more content if you use an Indian VPN server.

There are tons of VPNs on the market. We tested most of them and found that NordVPN works the best with ZEE5. It’s very easy to use, has lightning-fast speeds and excellent security, and it has a huge server network: 5,300+ servers in 59 countries.

How to Download the ZEE5 App in the USA

As far as we can tell, you can download the ZEE5 app in the US. We tested that on an Android smartphone while connected to a US server from NordVPN. We were able to find and download the app from the Play Store. However, when we opened it up, we saw this geo-blocking message:

We only managed to bypass the message when we disconnected from the US server.

So you need to use a VPN app to use the ZEE5 app, right?

Well, it’s not that simple. We reached out to many VPNs, and it looks like you can’t unblock ZEE5 in the USA on Android or iOS. The support reps told us that ZEE5 prompts location services. Even if you’re connected to a VPN that hides your US IP, ZEE5 will still see your smartphone’s GPS data that tells it you’re in the US.

In our opinion, you’re better off using the mobile site instead of the app. You can unblock it on iOS and Android while connected to a VPN server.

Can You Get a ZEE5 Subscription in the USA?

ZEE5 is free, but it also has a paid subscription called ZEE5 Premium. It gives you access to more content – ZEE5 Originals & Exclusives, live TV, blockbuster Hindi cinemas, and more.

Unfortunately, we can’t say for sure if you can use a VPN to get a ZEE5 subscription in the USA. You’ll be able to order it, there is a chance ZEE5 will decline your transaction if it sees you’re using a US payment method.

However, it looks like ZEE5 accepts payments through gift cards on its Android app. If you manage to buy one on Amazon using an Indian VPN server, you should be able to pay for a ZEE5 subscription even though you’re in the US.

Quick Guide for Optimizing ZEE5 Streaming Speeds in the USA

VPNs will slow down your speeds because they encrypt your data. If you use an Indian server, it will also take longer for data packets to travel between you and the VPN server. It’s because there are around 8,400+ miles or 13,500+ kilometers between the US and India.

If videos take too long to load for you or you experience buffering too often, here’s what you can do to improve your VPN speeds:

In this section, we’ll answer the most common questions people ask about how to use ZEE5 in the USA and watching ZEE5 with a VPN. If you have more questions, just leave a comment and we’ll get back to you.

Why Is ZEE5 Not Available in the USA?

ZEE5 apparently has a contract with a non-compete clause with DISH Network that prevents it from streaming its content in the US. The clause restricts ZEE5 from launching a direct-to-customer service in the US. Instead, it provides access to some ZEE5 content through DISH. It looks like Zee signed this agreement in 2016 when it expanded to the US market before ZEE5 was launched.

Due to that, ZEE5 has to use geo-restrictions to stop people in the US from watching content on their platform. Otherwise, it would look like ZEE5 is intentionally breaching the agreement it signed with DISH.

Can You Watch ZEE5 in the USA on Roku?

ZEE5 is available on Roku, and – yes – you can watch it in the USA if you use a VPN. Since Roku doesn’t have native support for VPNs, you’ll have to do one of three things:

If you use NordVPN, they have step-by-step guides that show you how to do all of those things.

Can You Watch ZEE5 on Fire Stick in the USA?

Yes, you can since ZEE5 works on Amazon Fire Stick, and most top VPNs have apps for it.

Can You Get ZEE5 in the USA with a Free VPN?

Yes, you can use a free VPN to watch ZEE5 in the USA. As far as we know, ZEE5 doesn’t use strict VPN detection and blocking methods.

However, using a free VPN isn’t very fun because it usually has slow speeds. Also, free VPNs have bandwidth caps – usually up to 2 GB per month is the standard. That will limit how much content you can watch.

And if you use random free VPNs you find on the app store, you’ll be at risk. They might log and sell your data, or expose you to malware.

It’s much safer and better to use a paid VPN. NordVPN, for example, has a very cheap two-year plan and a 30-day money-back guarantee. So, you buy with no risk.

How Much Does ZEE5 Cost?

We can’t give an exact number. ZEE5’s pricing differs from country to country.

For example, our tester in Romania told us they have two plans: a one-month plan for $4.89/month and a one-year plan priced at $39.19.

Finally, we used an Indian server from NordVPN, and only got one plan: a limited-time offer for a one-year plan priced at $6.66. That’s only $0.56 per month!

There’s a chance the Indian plans are the cheapest, but we don’t know if you can take advantage of them using an Indian VPN server. ZEE5 might refuse your transaction if you don’t have an Indian payment method.