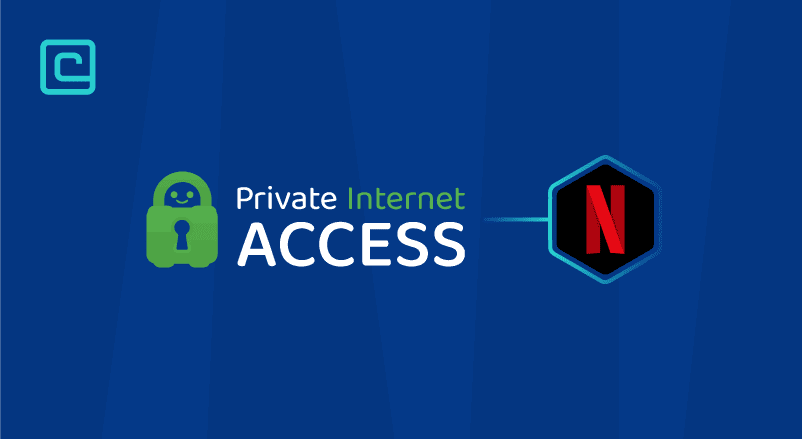 Depending on the country you’re in, Netflix displays different movies and shows. It does this because it needs to respect the licensing agreements it signed. Using a good VPN for streaming is the most popular way to unblock Netflix geo-restricted content.

Private Internet Access (PIA) unblocks the most popular Netflix libraries. Among these, we can mention Netflix US, Netflix Canada, and Netflix UK. This VPN service also provides blazing-fast streaming speeds across all servers. Plus, it has very user-friendly apps for all platforms.

What’s more, PIA offers strong security features that keep your Netflix account secure at all times. Check out our PIA VPN review to find out more about this provider.

In this article, we’ll tell you everything you need to know about PIA’s Netflix support, which we tested at length for a week. We’ll also provide tips for all streaming errors you might come across!

Yes, PIA unblocks almost any Netflix library out there. It also works great on all operating systems like Windows, macOS, Linus, Android, iOS, and smart TVs. What’s more, we had blazing-fast streaming speeds on both distant and nearby servers. So we didn’t experience buffering or quality drops on HD and 4K videos.

Because PIA has servers in 80+ countries, you can unblock tons of Netflix libraries. So you get access to hundreds of popular shows and movies all over the world. In our tests, this VPN gave us access to 10+ Netflix libraries. Besides, PIA also offers 10 simultaneous connections. So it’s perfect if you have a large household and everyone wants to watch Netflix with a VPN.

Can Netflix Block PIA or Other VPNs?

Yes, Netflix constantly detects and blocks most VPNs. If you can’t access a specific Netflix library when you’re connected to a VPN server, it means Netflix blocked that server’s IP. To avoid that, top VPN providers like PIA refresh their IP addresses very often. This way, Netflix can’t easily detect their servers.

However, if you’re still experiencing problems with a certain Netflix library, just connect to a different server to get a new IP address. Just make sure it’s a server in the same country as the Netflix title you want to watch.

For example, let’s say you want to watch a Netflix show that’s streaming in the US. If you’re connected to a Los Angeles server and you can’t access Netflix, simply switch to a different US server.

8 Important Reasons Why You Should Use PIA for Netflix

Here’s why PIA is one of the most popular choices to unblock Netflix content:

Here’s how to unblock Netflix with PIA:

Now Netflix should automatically unblock the content that’s streaming in that country.

Quick Fixes If Private Internet Access Is Not Working with Netflix

If PIA can’t bypass Netflix’s geo-restrictions, here are a few workarounds you can try:

1. Connect to a Different Server

If you can’t access Netflix while connected to one of PIA’s servers, it’s likely because the site blocked that server’s IP address. To get around that issue, you need to get a new IP address. To do that, just connect to a different server that’s in the same country as the content you want to unblock.

Even if you use a VPN to hide your IP, the cookies in your browser can reveal your real location. Here are some quick errors Netflix will show you if it detects you’re using a VPN:

The good news is that Netflix won’t ban you if it detects you’re using a VPN to unblock specific libraries. Instead, they will ban that VPN IP address to prevent you from accessing geo-restricted content. So if you get one of these messages, it means that the IP address you connected to is blocked.

To fix this, log into your Netflix account from a browser you don’t use often. Also, use the browser’s incognito/private mode. This way, tracking cookies won’t interfere with your VPN connection.

3. Get a Dedicated IP Address

If hundreds of people use the same IP address to connect to a specific Netflix library, the site will know that those people are using a VPN.

For a small additional cost, PIA offers dedicated IP addresses that are assigned just to you. This way, Netflix is less likely to detect that you’re using a VPN to unblock geo-restricted titles.

Here are the locations for which Private Internet Access offers dedicated IP addresses:

4. Use the Smart DNS

If you keep experiencing issues with PIA’s VPN service, switch to its smart DNS instead. Netflix usually doesn’t focus on blocking these tools as much as it focuses on blocking VPNs.

PIA’s smart DNS tool won’t encrypt your traffic, which means you’ll have very fast streaming speeds. However, keep in mind that means you won’t be able to secure your traffic and prevent bandwidth throttling.

5. Add PIA as an Exception in Your Firewall or Antivirus

Sometimes, antivirus software interferes with the VPN connection and blocks it. However, disabling your device’s antivirus is not a good solution because you might put your device at risk. After all, a VPN can’t protect you against direct malware infections.

Instead, we recommend adding your VPN as an exception in your firewall’s settings. This way, the firewall won’t filter your VPN traffic.

Sometimes, your VPN connection might drop. If that happens, your ISP can see what you’re doing online and Netflix can see your real IP. So, the site will know what your true location is. At the same time, your ISP can see that you’re binge-watching Netflix and they will slow down your Netflix speeds.

To prevent this from happening, make sure you enable the kill switch before every VPN session. If you want to be extra safe, you can even enable the advanced kill switch mode, which prevents you from going online if you’re not connected to the VPN.

Here are a few quick fixes that you can try if your internet connection doesn’t work properly:

If you still can’t unblock Netflix with Private Internet Access, just contact their customer reps. They should be able to tell you what VPN server you need to use to unblock a certain Netflix library.

In many cases, VPN providers don’t make this information public to prevent streaming services from blocking their servers. PIA has 24/7 live chat, so every time we had a question, we were connected to a helpful rep in less than 5 seconds.

Yes, Private Internet unblocks the most popular Netflix libraries. It provides fast speeds when streaming HD and 4K videos. While we ran speed tests, we didn’t experience video buffering or quality drops on both nearby and distant servers.

In addition to that, this VPN provides access to split-tunneling, which lets you optimize your streaming speeds. Dedicated IPs are also available for a small price, which make it harder for Netflix to block your VPN connection.

PIA also has high-end security features that protect your Netflix account from hackers. For example, it offers RAM-only servers, a kill-switch, an ad blocker, and full leak protection.

This VPN provider also offers some of the cheapest plans on the market. What’s more, you can try the service risk-free because PIA has a 30-day money-back guarantee.

If you don’t like PIA, there are other great VPN providers that you can use to unblock your favorite Netflix titles.

Another excellent Netflix VPN is NordVPN. It has blazing-fast streaming speeds on both nearby and distant servers. It also has NordLynx, which is NordVPN’s proprietary protocol that is an upgraded version of WireGuard. It’s faster and more secure, so you can watch HD and 4K movies on Netflix without experiencing quality drops. It also comes with Threat Protection, which blocks connections to fake Netflix sites.

What’s more, NordVPN offers a smart DNS service which you can use to stream Netflix on smart TVs. NordVPN also comes with high-end features like a kill switch, military-grade encryption, and full leak protection to protect your Netflix account.

Compared to PIA, Surfshark offers unlimited simultaneous connections. That means you can watch Netflix with a VPN on unlimited devices, which is very convenient if you have a very large family or own 10+ devices. What’s more, Surfshark also comes with some cool streaming features:

Here are the most common questions people ask about PIA and Netflix:

You can watch and unblock Netflix with these PIA alternatives:

Some Reddit users complain about Netflix blocking PIA. Others say the problem persisted even after buying a dedicated IP address.

However, we ran multiple tests while connected to servers in 10+ countries and were always able to access Netflix. HD and 4K videos loaded in less than 2–3 seconds without buffering or suffering quality drops on both nearby and distant servers.

PIA has servers in 80+ countries, so you can access tons of Netflix libraries. In our tests, we were able to access 10+ libraries, including Netflix US, Netflix Canada, and Netflix UK.

Will Private Internet Access Slow Down Your Netflix Speeds?

Using a VPN might slow down your speeds because it encrypts your data. That said, PIA only slowed down our speeds by about 15–25%, so we had very good speeds. HD and 4K Netflix videos always loaded in under 3 seconds and we never experienced buffering while skipping through them.

Still, if you’re experiencing slow speeds, here’s how to fix them:

Yes, using PIA is a safe way to unblock Netflix content and protect your online data. PIA has industry-standard security features. It offers a kill switch, full leak protection, and military-grade encryption. What’s more, its no-logs policy has been proven true in court.

Yes, PIA unblocks Netflix. In our tests, we could unlock 10+ Netflix libraries without getting the Netflix proxy error message.

However, if you happen to receive a Netflix error message, it means that Netflix blocked the IP of the server you’re using. To fix this issue, just connect to a different server from the same country as the Netflix title you want to access.