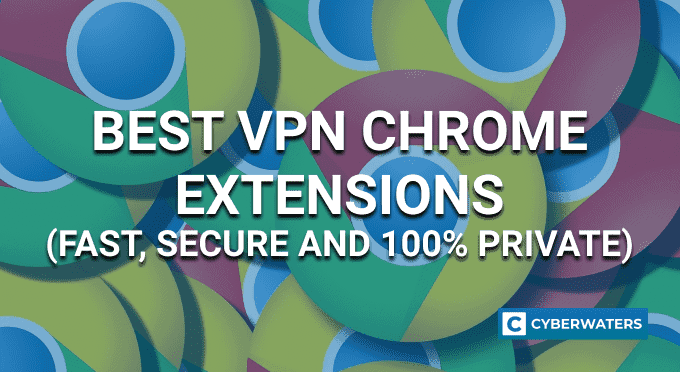 VPNs are excellent online tools. They provide great security, help you bypass geo-blocks and censorship, and protect your privacy. Most VPNs work on iOS, Android, Windows, macOS, and Linux. But can you also use a Chrome VPN extension?

Yes – there are actually some VPNs that have extensions for Chrome. We tested the top providers to see which ones offer the best experience. Keep reading to find out.

How to Pick the Best Chrome VPN Extension

Here’s what we look for:

We tested and researched 30+ top VPNs to find the ones with the best Chrome browser extensions. Many VPNs don’t have VPN extensions for Google Chrome or their plugins don’t provide good value. According to our results, these are the best services out there:

NordVPN has by far the best Chrome VPN extension on the market. We really like how secure it is – it makes it very simple to disable WebRTC to prevent annoying IP leaks. What’s more, you also get CyberSec – a really good ad blocker that gets rid of ads and blocks malicious sites. Also, NordVPN has a strict no-logs policy, which has passed 2 independent audits.

But that’s not all. With this VPN, you get access to RAM-only servers and a colocated network. Basically, that means that every reboot wipes all server data because everything is written to the RAM memory. And only NordVPN staff have direct access to some servers. Also,

What’s more, this VPN unblocks all popular streaming services – Netflix, BBC iPlayer, Amazon Prime, Hulu, and Disney+. It even works with smaller sites like VRV, Crunchyroll, and Pandora Radio. And NordVPN comes with 5,100+ servers in 60 countries, so there’s no limit to how many shows and movies you can unblock.

Plus, this is one of the fastest VPN Chrome extensions out there. In our tests, it always provided us with lightning-fast speeds – sites loaded instantly and HD videos didn’t buffer.

We also love how user-friendly NordVPN’s Chrome VPN extension is. It’s extremely simple to navigate it and connect to a server.

Surfshark is one of the few VPNs on the market that offers unlimited simultaneous connections. That means you can use the service on as many devices and browsers as you want. You can even share the subscription with your friends and family to save money.

This browser extension provides excellent security. It uses HTTPS to secure your data, and also blocks WebRTC leaks by default. You also get CleanWeb, a very capable ad blocker that gets rid of ads even on the most ad-heavy sites. There’s also an option to block cookie popup consents, which is very convenient. And you get multihop servers too – they hide your real IP address behind 2 servers instead of 1, so it’s more secure.

Also, we really like how Surfshark’s Chrome VPN extension comes with split-tunneling. It lets you choose which sites use the VPN and which sites use your local network. We were able to exclude our bank sites from the connection while unblocking TV shows on Netflix.

This VPN provider has 3,200+ servers in 60+ countries, so you’ll always have fast speeds. And it unblocks both big and small streaming sites. We also like how user-friendly the extensions are – there’s even an option to use dark mode, which is better for your eyes.

ExpressVPN’s Chrome extension is pretty unique. It actually lets you remotely control the VPN app on your device from your browser. You’ll need to install the VPN app first, of course, but it’s definitely worth it.

By remotely controlling the VPN app, you get access to end-to-end VPN encryption which properly secures your traffic. What’s more, you don’t just encrypt your browser’s traffic – you encrypt your entire device’s traffic. Due to that, you also get access to perfect forward secrecy – it regularly changes your encryption keys to avoid cyber threats.

On top of that, ExpressVPN also has other high-end security features. It has an audited no-logs policy, RAM-only servers, and WebRTC leak protection. The Chrome extension can also prevent HTML5 geo-location leaks and can force most websites you visit to use HTTPS.

Even though this Chrome VPN extension uses actual VPN encryption, your speeds won’t suffer due to it. In our tests, this service provided us with very fast speeds – 4K videos loaded instantly and didn’t buffer, for example. And ExpressVPN unblocks popular sites like Netflix, Amazon Prime, and Disney+.

This VPN extension for Chrome is also extremely simple to use. We especially like how all settings and options have easy-to-understand explanations.

Private Internet Access (PIA) provides excellent privacy via its Chrome VPN extension. You get a strict no-logs policy that has been proven true many times in court. Also, PIA’s Chrome extension is open-source, meaning anyone can inspect the code to make sure it’s safe to use.

On top of that, this service also provides you with good security. It has a feature that disables WebRTC to prevent unwanted IP leaks. And you get an ad blocker called PIA MACE too, which is extremely efficient. In our tests, it blocked ads on ad-heavy platforms and also stopped us from accessing malicious sites.

PIA is really good for streaming – it works with top sites like Netflix and Disney+. And it also has extremely fast speeds. Websites always loaded instantly for us and large files downloaded very fast – even on distant servers.

This Chrome VPN extension has a very intuitive design. There’s a quick-connect feature but it’s also extremely simple to manually connect to servers. That’s mostly because PIA displays the server ping, so you know which servers provide the fastest speeds.

With this VPN, you get good customer support, cheap plans, and a 30-day money-back guarantee.

Hotspot Shield has a good Chrome extension which has a pretty good free plan. It encrypts your data, gives you access to US servers, and has extremely fast speeds thanks to its proprietary Hydra Catapult protocol. This service is also ad-free and has a no-logs policy.

What’s really cool is that the free browser extension comes with advanced security features that protect your privacy. For example, the Sword feature feeds web trackers fake information about you. That way, advertisers can’t build an accurate advertising profile based on your preferences. On top of that, Hotspot Shield also blocks malicious sites, cookies, trackers, ads, and WebRTC.

The only downside of the free plan is that it comes with a data cap – 500 MB per day. But if you upgrade to the paid plan, you get unlimited data. Plus, you also get access to multiple servers in 7 other countries around the world.

Another thing we like about this Google Chrome VPN is how user-friendly it is. It has 1-click connections and all the privacy settings have useful explanations.

CyberGhost VPN is a good option if you want a free VPN connection inside your browser. Unlike most browser extensions, this is actually a VPN, not a proxy. So you get powerful end-to-end encryption when you connect to a server. On top of that, this VPN provider also has a strict no-logs policy.

We also really like that CyberGhost VPN’s free VPN extension comes with unlimited data. Most free VPNs limit how much data you can use each day or month. They usually restrict you to 500 MB or 2 GB of data. But with this service, you can binge as many videos and download as many files as you want.

This Chrome extension only gives you access to servers in 4 countries: the US, the Netherlands, the US, and Germany. Despite that, we still experienced very fast speeds. In our tests, we only saw a 20-25% slowdown on average. Websites loaded fast – even the ad-heavy ones. And we were able to download 2-3 GB files in 10-15 minutes, which is really good.

CyberGhost VPN’s Chrome extension is perfect for people new to VPNs. It’s extremely minimalistic – there’s only a quick-connect feature and the list of servers. So you never feel overwhelmed by too many settings.

Here are the most common questions we saw people asking about the best VPN extensions for Chrome and Chrome VPNs:

Does Chrome Have a Built-in VPN?

No, Google Chrome doesn’t have a built-in VPN. If you come across an extension that claims to be a built-in Chrome VPN, don’t install it. It’s very likely a scam.

If you want to use a VPN extension with Chrome, there are many VPNs that offer that. Our top pick is NordVPN because it’s secure, very fast, and good for streaming.

Both Hotspot Shield and CyberGhost VPN have really good free Chrome extensions. They both have fast speeds, good security, and fast speeds.

Make sure you only use free Chrome VPNs from reputable VPN providers. Don’t just search for “free VPN” and install the first extension you see. Many free VPNs actually log and sell user data, have very slow speeds, and are buggy.

How to Add a VPN Extension to Chrome

It’s extremely simple to do that – just follow these steps:

Yes, but only some Chrome VPNs offer that. Many Chrome VPN extensions don’t use encryption because they’re proxies, not VPNs. A proxy can be configured to provide encryption, but that’s up to the VPN provider.

CyberGhost VPN and Hotspot Shield provide encryption via their extensions. ExpressVPN does that too – but it offers encryption via remote control of its VPN app.

Still, Chrome VPN extensions that don’t have encryption are still secure to use. They make up for that by offering other security features. For example, they can block WebRTC to prevent IP leaks, block ads and malicious sites, and offer no-logs policies.

Why Do You Need a Google Chrome VPN?

Most people use a Chrome VPN to unblock geo-restricted or censored content. It hides their IP addresses, so you can bypass all restrictions. For example, we regularly use Chrome VPN extensions to unblock our favorite TV shows on Netflix.

You can also use a Chrome VPN to protect your privacy. Most extensions have ad blockers that get rid of ads and trackers. They also block connections to malicious sites, so they protect you from phishing.

Are Chrome VPNs the Same as Incognito Mode?

No, they’re completely different. Incognito mode hides your browsing from people who have access to your device – it clears your history and cookies on exit. On the other hand, Chrome VPNs hide your IP address and protect you from ads, trackers, and malicious sites.

Not really – most extensions lack the advanced features you get with VPNs apps. For example, VPN apps give you access to split-tunneling, double VPNs, obfuscation, and different VPN protocols. Chrome extensions mostly just hide your IP and help you unblock geo-restricted content.

Also, most VPN Chrome extensions don’t use encryption. And if they do, they only encrypt your browser’s traffic. So traffic from other apps, like your torrent client, won’t be secured.

ExpressVPN is the only one that gives you a near-VPN experience via its extension. That’s because it lets you remotely control the VPN app. So when you connect to a server, you don’t just encrypt your browser traffic. You encrypt the traffic from all online apps on your device.