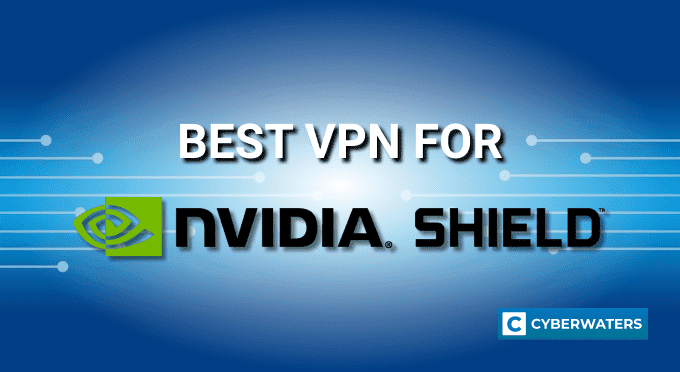 Many people use Nvidia VPNs with their Shield digital media players to get a better online experience – they secure their traffic and unblock geo-locked content (Netflix, Hulu, Kodi, Amazon Prime, and more).

But with literally hundreds of VPNs on the market, it’s hard to tell which one to use. We’ll try to make things simpler for you by showcasing the best VPNs for Shield TV devices.

Here are the best VPNs for Nvidia Shield:

How to Pick the Best VPN for Shield TV

Here’s what to look for to find a good VPN for Nvidia Shield:

We checked 20+ top VPNs to see which ones offer the best streaming experience on Nvidia Shield. After dozens of tests, we concluded these are the best VPNs for Nvidia Shield:

We like NordVPN the most because it has really fast speeds and great security. It has a very user-friendly Android TV app, and you can use the NordLynx or OpenVPN protocols. NordLynx is NordVPN’s proprietary protocol built around WireGuard technology, so it’s very lightweight.

And on top of fast speeds (AV-TEST’s research concluded it’s the fastest VPN on the market), you also get unlimited bandwidth and 5,400+ servers in 59 countries.

This VPN has affordable pricing if you get long-term subscriptions. It also has a 30-day money-back guarantee. It’s a no-questions-asked deal mostly, but NordVPN will try to troubleshoot any issues you’re experiencing first.

If you want to use a VPN on other devices besides the smart TV, Surfshark supports unlimited simultaneous connections with one account. Yes, that also means you can share your subscriptions with friends and family to save money (not that you need to – Surfshark is very cheap).

Surfshark has an intuitive Android TV app. You get unlimited data and fast speeds, and you can use OpenVPN, IKEv2/IPSec, and WireGuard. There are 3,200+ servers in 65 countries, so you can unblock pretty much any streaming site you want.

This provider doesn’t keep logs (it didn’t undergo an audit, but the Privacy Policy is transparent) and uses powerful encryption to secure your data. Surfshark also has a kill switch on its Android TV app that protects you from traffic leaks.

You get round-the-clock support through live chat, and the customer reps told us Surfshark supports Nvidia Shield.

This VPN has a no-questions-asked 30-day refund. Its reps will try to troubleshoot any issues you might be experiencing, but you can always just say you don’t like the service to get your money back.

AtlasVPN seems to check all the boxes needed to use on Shield TV. Starting from the number of servers, of which they have 750+ all across the world and ending with features designed to enhance your network security, it is the best VPN for Nvidia Shield.

Offering streaming-optimized servers, AtlasVPN ensures the best speed and stability for your streaming needs. It also allows you to unlock geo-restricted content all while protecting your connection with IPv6 and DNS leak protection as well as a kill-switch. As if that was not enough, the provider allows unlimited simultaneous connections, so you can make use of it’s advantages on all your devices ranging from mobile phones to TV or PC. The VPN is well crafted and easy to use on Android, iOS or Windows operating systems.

AtlasVPN has a 30-day money back guarantee, so it’s definitely worth a shot, especially for the price that’s hard to beat in the current market. And even though it is very stable, in case you’d need some advice – they have 24/7 support to help you out.

PrivateVPN is one of the most reliable VPN services for Nvidia Shield. It offers excellent Android support, as its Android app comes packed with great features but still maintains a simple and intuitive layout. The service allows you to connect up to six devices simultaneously. Moreover, it doesn’t limit how often you can switch between servers or how much bandwidth you can use per month.

Looking at its server lineup, you can count on a well spread-out network spanning across over 200 server locations in 63 countries. Robust security features back up these servers. These include IPv6 and DNS leak protection, an automatic kill switch, and a Stealth VPN feature.

The service maintains a 99.98% uptime, so connection issues are few and far between. And, even if you encounter one, you can rely on a great customer support service. Their support staff is available through live chat and email. Plus, you can use an extensive library covering FAQs and appropriate guides.

ExpressVPN has a great Android TV app that lets you use Lightway and OpenVPN. Lightway is ExpressVPN’s proprietary protocol which has lightning-fast speeds and really fast connection times to servers (a fraction of a second). With ExpressVPN, you also get 3,000+ servers in 94 countries and unlimited data.

ExpressVPN’s Android TV app has a kill switch that prevents traffic leaks. The service also uses military-grade encryption (AES-256 bit) to secure your data. What’s more, this provider doesn’t store logs and it underwent a security audit to prove it.

This provider has 24/7 live chat support, so help is always a click away. We asked the support reps, and they confirmed ExpressVPN works with Nvidia Shield.

The pricing is steeper than most VPNs, but – on the plus side – ExpressVPN has a no-questions-asked 30-day money-back guarantee. You just ask for your money back over live chat, and you’ll get it in a few days.

How to Install a VPN on Nvidia Shield TV

If the VPN doesn’t have an Android TV app, you can sideload it on your smart TV. Here’s how:

Can I Use a VPN for Nvidia Shield Through My Router?

Yes, you can set up the VPN on your router. This way, every time you use the Nvidia Shield to go online, it will automatically use the router’s VPN connection.

However, we recommend using the Android TV app or the sideloading method instead.

Because using the VPN on your router will result in slower speeds. The VPN doesn’t just encrypt your smart TV connection. It encrypts all the traffic that goes through your router – your PC, smartphone, laptop, gaming console, tablet, and any other smart devices you have in your home.

Also, setting up a VPN on a router is pretty difficult (yes, it’s much harder than the sideloading method). To find out how to do it, check your provider’s guides. We can’t offer you a tutorial because the setup process varies from service to service and router to router.

We came across many FAQs when researching this topic, so we decided to answer most of them here. If you have more questions, just leave a comment and we’ll get back to you.

Do I Need a VPN for Nvidia Shield?

You need a VPN for Nvidia Shield if you want to unblock geo-locked content on streaming apps like Netflix, Hulu, and Amazon Prime. A VPN hides your IP, so streaming services can’t tell what country you are from.

You should also use a VPN for Nvidia if your ISP is throttling your bandwidth. The VPN encrypts your traffic, so your ISP can’t monitor it. If they don’t know what you’re using data on, they can’t selectively slow down your connections.

Can I Also Get an Nvidia Shield TV Pro VPN?

As for the differences between the two devices, Nvidia Shield TV Pro has more RAM, more internal storage, and two USB ports.

Why Is My VPN Not Working on Nvidia Shield?

Common issues include seeing proxy error messages when unblocking sites, the VPN app crashing, or the VPNs being very slow and freezing.

Can You Use Blokada Together with an Nvidia Shield VPN?

Blokada is a free ad blocker for iOS and Android (so it works on Android TV). It’s efficient, but it doesn’t work well with a VPN. According to some users, Blokada uses the VPN API, and Android only allows one VPN API at a time. The conflict causes VPN connectivity issues.

So, you have to choose between Blokada and an Nvidia VPN.

The good news is many VPNs have their own ad blocker and offer it on their Android TV apps. If the VPN you’re using doesn’t have one, install the Firefox browser and use uBlock Origin (a very efficient ad blocker).

Can I Use a Free VPN for Nvidia Shield?

Yes, but we don’t recommend it. Free VPNs aren’t good for streaming because they have slow speeds (pretty much all their servers are overcrowded). Also, free VPNs use bandwidth caps – usually around 500 MB or 2 GB per month. That’s barely enough to watch a few episodes of your favorite shows!

What’s more, some free VPNs can put your data at risk. They log it and sell it to advertisers. Sometimes, they can even expose you to malware.

Stick with paid Shield TV VPNs instead. All the services we mentioned in this article have risk-free money-back guarantees. So, you have enough time to test the VPNs to make sure they work well for you.