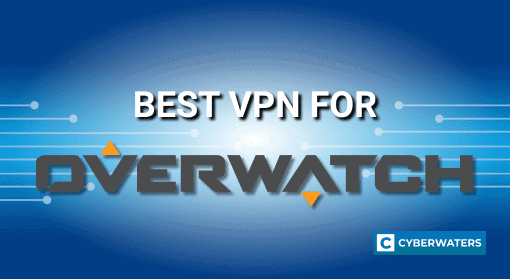 The iconic Blizzard FPS game is one of the most exciting online multiplayer games around. It’s fast-paced, team-based, and endlessly entertaining. And, although Overwatch is pretty well optimized, you can still run into a number of issues when gaming.

Problems like lag, high ping, and unreliable network speeds can be very annoying. Especially for players gaming competitively. There’s something even more worrying. Gaming through an unsecured network opens you up to hacker attacks, DDoSing, and many other safety concerns. This is where a VPN can help.

That said, not every VPN is robust and reliable enough to keep up with a demanding game like Overwatch. That’s why we’ve also done the necessary research to bring you the five best VPNs for Overwatch in 2022. We’ll share with you the key criteria and help you choose the best Overwatch VPN for your needs.

Here are the best VPNs for Overwatch:

Why Do You Need a VPN for Overwatch?

Many gamers will tell you that using a VPN for gaming is impractical. While it’s true that adding another layer on top of your network will slow down your connection speed, this doesn’t always have to be the case. In fact, connecting to a VPN server can even help you speed up your connection and decrease ping. For this to be the case, you need to pick a quality VPN that can offer you high-speed global servers.

Besides being fast and reliable, the VPNs servers can also provide you with enhanced online privacy and security. By routing your real connection through the VPNs encrypted tunnel, the service will mask and hide all of your valuable data. This will maximally reduce the risk of DDoS attacks, malware, and hacking attempts .

These advantages stretch much beyond Overwatch itself. You can protect your online identity when playing other games, streaming, torrenting, or simply browsing the web. Plus, you can enjoy these features on all of your devices simultaneously.

The Potential Overwatch VPN Ban – Will I Get in Trouble for Using a VPN?

As Overwatch generally doesn’t ban gamers for using a VPN service on the game’s servers, there’s no clear-cut rule. That said, whether or not you get banned also depends on which VPN you’re using.

If you’re using a poor VPN with shady servers, you’re risking a ban from Overwatch. That’s why we recommend you stick with one of our top five picks. Each of them is proven to work on the game and offers high-grade servers that will keep you from getting IP or account banned.

NordVPN supports all of the features you would look for in a VPN for the ultimate gaming experience. With over 5400 servers in 59 countries worldwide, you can rely on a blazing fast global server network. Avoid issues like lag and in-game delay and get an advantage over other players who aren’t using a VPN.

This VPN comes with a set of great features that make it an ideal choice for playing Overwatch and other online games. These include advanced security features like a kill switch, split tunneling, and RAM disk servers. Additionally, NordVPN offers obfuscated servers. These servers can mask the fact that you’re using a VPN.

With NordVPN, you can access the latest Overwatch features and play without ANY connection issues or fears of getting DDoSed. The service offers very budget-friendly subscription plans and a 30-day money-back guarantee.

Surfshark is particularly popular among pro Overwatch gamers and competitive players. This is because it’s capable of providing some of the best speeds out of all VPN services. Moreover, Surfshark makes VPN use super intuitive. Its apps are designed with plenty of user-friendly features in mind.

Some of Surfshark’s best features include Multi-Hop, a kill switch, and private DNS on each server. Plus, you can connect the service on an unlimited number of devices on just one subscription plan.

The best part is, all of these features are available at some of the most affordable prices around. The service is a bit more expensive if you opt for the month-by-month plan. But, if you’re looking for a top-quality VPN that offers excellent value for your subscription money, Surfshark is hard to top.

Being a budget-friendly service provider, Atlas is one of the best VPN options for Overwatch. It has a good amount of fast speed and high quality servers and a Wireguard protocol which means good speeds and less ping for your gaming experience. Add to the mix a killswitch and you’re all set, as it makes sure that your IP address does not leak online.

And if gaming is not everything that you want it for, it has all other basic VPN needs like military-grade encryption, advanced leak protection, and a solid no logs policy. A well-rounded VPN with good features vs price ratio, definitely a must have provider.

PrivateVPN provides more than 200 server locations across 63 countries worldwide. Its service comes without any data transfer caps or limits on server switches. It’s also backed up with sophisticated encryption and a zero-logs policy. Moreover, PrivateVPN allows you to customize your experience and adjust between different 128-bit or 256-bit encryption settings.

PrivateVPN does relatively slim apps in terms of any advanced privacy or security features. This makes it a less favorable option for streaming and torrenting, but it’s still one of the best VPN for Overwatch players. It possesses some essential security features for gamers, such as a kill switch and DNS and IPv6 leak protection. With that in mind, if you’re looking primarily for a gaming VPN, PrivateVPN can provide you with all of the necessary features.

ExpressVPN is one of the fastest, most secure, and best-performing VPNs on the market. It has a strong reputation for being an unfailing VPN service for any online activity you need. This VPN offers more than 3,000 servers in 160 locations across 94 countries in all corners of the globe. It also employs a TrustedServer technology and runs all of its servers entirely on RAM instead of hard disks.

The service doesn’t keep any user activity logs. It’s based in the British Virgin Islands, far away from any international organizations. Apart from using it to play Overwatch, ExpressVPN is one of the best all-around VPNs you can get. It supports torrenting on all of its servers and is very proficient in unblocking all streaming websites.

Can I use a free VPN for Overwatch?

No, there are many reasons why using a free VPN for Overwatch is a bad decision. Free VPNs for gaming come with a long list of issues. Most notably, these include bandwidth caps, data throttling, and low data limits. What’s more, many free VPNs are scams set up just to harvest your data and sell it to the highest bidder.

Can I use a VPN to play Overwatch competitively?

Yes, a VPN can give you the necessary edge you need to beat out other players. Moreover, if you live in a region where Overwatch’s VoIP service is blocked, using a VPN can help you fix this issue. No matter where you live, you can play Overwatch competitively with a VPN without missing out on any key features.

Can a VPN help me for streaming Overwatch on Twitch?

Yes, a VPN can be an excellent tool for Overwatch Twitch streamers. Using a VPN when streaming Overwatch can help you increase your performance. Additionally, a VPN will hide your actual IP address when streaming to your viewers. This will help protect your valuable private information from falling into the wrong hands.

How to Change your Overwatch VPN server to West Coast or East Coast?

If you’re a heated fan of Overwatch, you probably know that the dilemma between playing on East Coast and West Coast servers is very real. Fortunately for you, with a VPN, you can easily switch between locations and access both of them. This will allow you to experience both servers, along with all others worldwide.

Why should you even care about his topic? Well, there’s a widely accepted opinion that there is a distinct difference between the two. More specifically, West Coast Overwatch servers are thought to have better online games. But, they are also highly competitive and often very toxic. Opposite to this, the East Coast servers are suitable for players of all skills and are less competitive and toxic.

Best VPN for Overwatch – What’s the Best Choice for You?

If you’ve faced any of the issues we’ve talked about on this page, subscribing to a VPN for Overwatch should be the best way to resolve all of them. From small and pesky issues to worrying security concerns. A quality VPN for Overwatch will help you get past them and enjoy a smooth Overwatch gaming experience.

Overwatch is one of the most popular online games, and you shouldn’t let anything get between you and the game you want to play. The five VPNs we’ve shared with you on this page can all provide you with a reliable service so you can play Overwatch worry-free. All you need to do to ensure this is to pick the best VPN for Overwatch and start gaming!