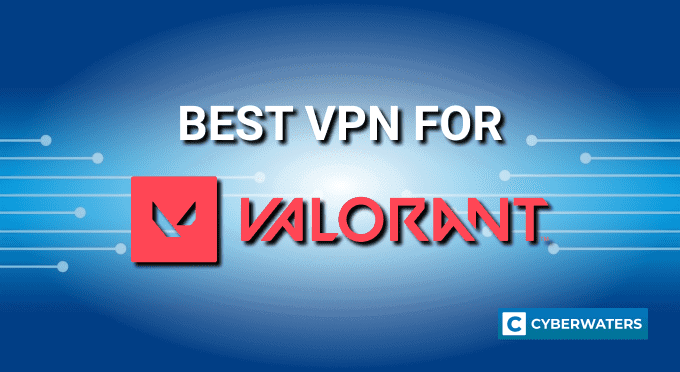 Riot Games officially released Valorant in 2020, after extensively working on it for six years. And, it didn’t take this free-to-play game much time to capture the attention of gamers worldwide. During the beta testing period alone, the game already had a user base of over three million players.

Unfortunately, not all players globally can enjoy the same service. In some locations, local governments restrict features such as VoIP. In other places, the game is unavailable altogether. Even if you live in a country where gamers can access Valorant without any restrictions. There are still some security concerns that need addressing.

Many gamers have gone around these issues by using a VPN when playing Valorant. A VPN can keep you private and secure while providing you unrestricted, worldwide access to Valorant. We’ll share with you the best tips on why and how to play Valorant with a VPN and take a look at the best VPNs for Valorant.

Here are the best VPNs for Valorant:

Why You Need a VPN for Valorant

As we’ve mentioned above, there are many reasons why you should use a VPN for Valorant. The top one is that it will allow you unrestricted access to all of the game’s features and servers. In many cases, you’ll also be able to reduce ping and lag and rely on a more stable online connection.

Besides this, a VPN for Valorant can keep you secure and private when gaming online. When playing Valorant through a VPN, you don’t have to worry about any security issues. You’ll be safe from hacker and malware attacks and any DDoSing attempts from malicious gamers.

As long as you’re playing Valorant through the VPN servers, you can play from anywhere you choose. Riot Games is very strict when it comes to changing region settings on your account. So, make sure to always remember to turn on the VPN first before accessing the game.

That said, for a VPN to be valuable and advantageous for Valorant, it needs to have a set of specific features. Gaming-wise, it needs to offer a large server base with servers fast enough to provide a smooth playing experience. Security-wise, it should provide high-standard encryption and a zero-logs policy.

It should also provide safety features like a kill switch, obfuscation, and varied VPN protocols. If all of these conditions are met, using a VPN for gaming can help significantly improve your experience.

Yes, Valorant bans IP addresses of users it suspects are cheating or exploiting the game in any way. What’s more, the game also employs the so-called Hwid ban. This is when the game blocks you through hidden files on your device, which you can’t see or delete manually.

A VPN can help you go around a Valorant IP ban but can’t do much if you’ve been Hwid banned. Going by the information from user forums and what Reddit says, the only way to avoid an Hwid ban on Valorant is to make hardware changes to your device. The other option is to completely switch the device you’re playing on.

NordVPN is the ultimate VPN for Valorant and our top recommendation. With over 5900 servers in 59 countries, this VPN is ideal for gaming from anywhere in the world. Plus, NordVPN runs servers with obfuscation features. This prevents them from experiencing blocks even in the most restrictive countries.

NordVPN offers complete DDoS protection, DNS leak protection, and a very reliable kill switch . Aside from this, you can utilize custom NordVPN features like CyberSec. This feature ensures a malware-free online experience that stretches far beyond gaming itself.

The service is based in Panama and is very dedicated to maintaining a 100% zero-logs policy. Moreover, all of NordVPN’s servers are entirely RAM-based. Even in case of a breach, hackers couldn’t retrieve any usable data on you. NordVPN has also created its own protocol called the NordLynx protocol. It’s a super-fast and highly-performing protocol that uses a Double-NAT system.

Surfshark maintains a very good reputation in the online world. It’s regarded as a stable and reliable performer with features suitable for both beginners and advanced VPN users. Surfshark offers more than 3,200 servers in 65 countries. More importantly, from a security perspective, it supports DNS on each server.

Surfshark allows you to connect an unlimited number of devices so that you can game with your friends without any limits. It provides light and fast apps for all major platforms. If you opt for the long-term plan, Surfshark is the most budget-friendly VPN for Valorant. Plus, when you factor in all of the above-listed features, it’s also one of the best value-for-money VPNs you can opt for.

With the speed that Atlas VPN servers provide, there is no way to be outmatched while playing Valorant. Atlas VPN can be a great and far less costly alternative for any other VPN out there. This is most definitely a great choice for anyone wishing to be the best. Apart from the massive increase in speed, you will also be met with military-grade encryption, no-logs policy, leak protection and even a SafeSwap function which allows you to access the internet from multiple IP addresses at a time.

But wait, Atlas VPN offers even more than that. You can safely use it on an unlimited number of devices allowing you to play Valorant with friends who normally could not. And all this while being far more secure than other players. Furthermore being one of the cheapest VPNs on the market and offering a 30-day money back guarantee, Atlas is definitely the best VPN for Valorant.

PrivateVPN deserves mention because it does a great job of providing a feature-packed gaming VPN service in a practical package. It provides over 200 server locations in 63 countries worldwide. All servers are capable of delivering above-average speeds and come without any bandwidth limits. Moreover, there are no caps on the number of server switches. This allows for convenient Valiant gameplay, regardless of your locations or the server you want to play on.

The service offers streamlined and light apps for all major platforms. PrivateVPN also allows you to connect up to six simultaneous connections per one subscription plan. This VPN doesn’t come with many advanced security features. That said, you can still count on several connection protocols, robust encryption, and a zero-logs policy. There’s also strong DNS and IPv6 leak protection, so you never have to worry about your data falling into the wrong hands when gaming online.

ExpressVPN has some of the best-quality VPN servers around. It offers over 3,000 worldwide servers. So, you can enjoy reliable connections without any annoying interruptions. The service’s in-house Lightway protocol is a fast, secure, and transparent solution. It’s accompanied by additional features like RAM-based servers, strong privacy, and DDoS protection.

Besides playing Valorant with ExpressVPN, this VPN service can offer you much more. It’s one of the best all-around VPNs on the market. It’s adept in unblocking every streaming platform out there. ExpressVPN is also a great choice if you frequently use P2P file-sharing sites. It offers top-standard AES 256-bit encryption and private DNS on every server.

The answer to this question is purely a subjective one. In other words, the best VPN server for Valorant mainly depends on your location and proximity to the server. Another critical factor is the number of users on the server. All of these contribute to the overall server’s speed and performance when playing Valiant.

Can playing Valorant with a VPN lower my ping?

Yes, a reliable VPN for Valorant can definitely help lower your ping. This is because a VPN will help the data move more freely through your network. For a VPN to reduce your ping, you must connect to a fast VPN server that’s near your physical location. You should also use a protocol that favors network performance.

Can I use a free VPN to play Valorant?

No, we don’t recommend using a free VPN to play Valorant. The majority of free VPNs are malicious and contain malware or adware. Even the free VPNs that are safe to use often tend to underperform. A free gaming VPN can’t offer you unrestricted bandwidth or the high speeds you need for enjoyable gaming.

Can you get a Valorant VPN ban?

No, the game isn’t actively blocking VPN users who are accessing different regions this way. Valorant has made clear that they don’t support regional transfers. However, there doesn’t seem to be any mechanism in place that seeks out users who employ VPNs to access remote servers.

How to get unbanned from Valorant?

If you’ve been IP banned from Valorant, you can get unbanned by using a VPN service. All you need to do is connect to a nearby VPN server, and you can play the game again. This will trick Valorant’s servers into thinking your VPN server’s IP is your real address.

Best VPN for Valorant – How to Choose the Most Suitable Service

Ultimately, the best VPN to play Valorant with is the one you decide to be. We’ve narrowed the choice down to the five top Valorant VPN services. Keep in mind all of the vital criteria we’ve highlighted on this page. With that info, you can be certain that you’ll choose the most suitable VPN for Valorant for your individual needs.

If you’re having trouble deciding which VPN service is the best choice for you, we recommend NordVPN as the top overall VPN. It offers a premium service at very affordable subscription prices. Plus, you can take advantage of a 30-day money-back guarantee.