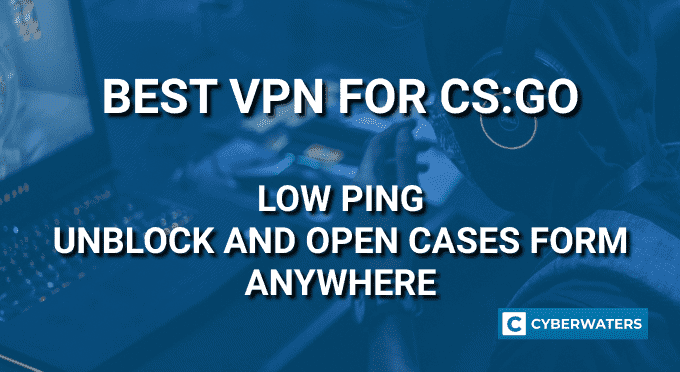 Despite being over eight years old, Counter-Strike: Global Offensive is still one of the most popular multiplayer games, with over 20 million users. Whether you’re playing professionally or enjoy CS:GO just occasionally for fun, you always want a smooth experience without internet connection throttling.

Issues with your IP, lags, and connection speeds can significantly hamper your Counter-Strike session. One of the most effective ways to avoid these problems is to use a VPN (virtual private network). But, how to choose the best VPN for CS:GO?

There are several factors to look for when choosing the best VPN for CS:GO, such as server speed, network stability, suitable apps, and the VPN’S physical server location. All of these aspects jointly contribute to the overall quality of your experience when playing Counter-Strike: Global Offensive through a VPN connection.

Here are the best VPNs for CS: GO:

Is a VPN Allowed in CS:GO?

Yes, you’re entirely free to use a VPN for CS:GO. Although using a VPN is frowned upon by Steam, many CS:GO players have been doing so for years problem-free. The only thing you should be mindful of is that you shouldn’t buy any other games through Steam when connected to VPN services.

This is because doing so is a direct breach of Steam’s T&C, and you can get banned for it. Other than that, you’ll be flying under the radar, and Valve won’t restrict your profile from connecting through a VPN for CS: GO.

Can You Get Banned for Using a VPN Service On CS:GO?

No, as we mentioned above, connecting through a VPN to play CS:GO isn’t in itself a reason for a ban. But, if you’re using it to bypass Steam’s region blocking for games or purchase other games at lower market prices, you’ll be violating the platform’s VAC (Valve Anti-Cheat) rules and putting yourself in danger of getting removed by Steam.

Can You Open CS: GO Cases with a VPN?

Yes, you can use a VPN to open CS: GO cases. Opening cases isn’t allowed in many countries worldwide, mainly because of gambling’s legality in these regions. Even in European countries, such as Belgium and the Netherlands, you won’t be able to open CS: GO cases without using a VPN.

If you were ever prompted with an “Opening this container is not allowed in your country” message when trying to open CS:GO cases, you can avoid this issue by routing your connection through a secure VPN server.

Can a VPN reduce Your Ping in CS: GO?

Yes, you can use a VPN to reduce your ping when playing CS:GO. However, this is not due to the most commonly-accepted reasons you can find online. A VPN can reduce your ping in online gaming if your ISP uses a bad routing path to the CS:GO game server you’re accessing. You can avoid bad routing by connecting your network through the VPN’s server in such cases.

It’s important to mention that a VPN can also increase your ping and worsen your gaming experience in some instances. That said, this can only happen in case you connect to a remote server, and your traffic needs to travel further to get routed through the VPN’s server. If you stick to nearby servers that aren’t overcrowded, you won’t experience any ping increase.

How to Use a VPN for CS: GO

Although there are several methods of switching servers and accessing the desired country, using a VPN is the simplest and most straightforward way of doing so.

There are many reasons why NordVPN stands out among all the best VPNs for CS:GO. It offers fast performance at consistent connection speeds and service with almost no connection drops whatsoever. But, except for excelling performance-wise, NordVPN ticks all of the critical boxes in a gaming VPN that players are looking for.

NordVPN offers limitless worldwide access to obfuscated servers in any region you want to game in. All of their servers are equipped with DDoS protection tools and military-grade AES encryption ensuring a secure connection.

Plus, this VPN service doesn’t mind if you share your account with more people, as it can be used on multiple devices. This means that you can split the cost between your friends for NordVPN’s already very affordable price point. All plans come with a 30-day money-back guarantee.

Another advantage of NordVPN is the kill switch feature. This advanced security measure additionally protects your data against leaking to the web. It is the last resort for protection – if somehow your VPN connection is broken, the kill switch blocks the internet access on your device or in a particular application to avoid accidental leaks. Your connection stays blocked until the encryption is restored or up to a point you will turn the feature off manually.

SurfShark firmly holds a position as one of the best VPN services for Counter-Strike: Global Offensive and as an excellent online gaming VPN in general. With 3500+ servers, each equipped with private DNS, SurfShark provides you with a well-spread-out, extensive server network capable of supporting low-latency connections required for high-performance gaming.

Whether you’re only looking for a reliable VPN for CS: GO or also plan on using it for other online purposes as well, SurfShark is an excellent choice. Each of their servers supports P2P file sharing, making SurfShark a very convenient option, regardless of your location.

This VPN uses a WireGuard protocol which is a very secure network tunnel. It is a more efficient replacement for IKEv2/IPSec and OpenVPN. It is much lighter, as it operates on 4,000 lines of code (compared to OpenVPN’s 100,000). As a result, it is easier to test and work with, so any possible weaknesses can be identified faster. What’s more, fewer lines also mean fewer places where security vulnerabilities can be hidden. On top of that, WireGuard works faster than many other protocols.

Their monthly subscription plan is a bit pricey, but if you opt for the long-term price plan, you can get this top VPN provider for CS:GO at only a couple of bucks per month.

With its amazing speed and over 750 servers optimized to reduce ping and lag, Atlas VPN can become the best VPN for CS:GO. It can also prevent an internet service provider from interfering with your connection while you play online games, so read on.

Atlas VPN has a strict no-logs policy, advanced DNS leak protection, a kill switch, split tunneling, an IP rotator, and many other advanced features that you can get for one of the lowest prices in the market at the moment.

Moreover, Atlas VPN is safe to say that with unlimited bandwidth and great geo-targeting, you can bypass any restrictions online and access geo-restricted content while at the same time avoiding any detections and making your internet traffic totally anonymous, even while using various gaming platforms.

You can use Atlas VPN on an unlimited number of devices to share your gaming experience and online privacy with a group of friends as well as to get exclusive access to the unique DLC, trendy assets, and even games blocked in your region.

What makes PrivateVPN one of the best VPNs for CS:GO is its ability to instantly access any region. This VPN has one of the largest server networks in the industry, spanning more than 200 server locations in 63 countries. With so many server options at your disposal, PrivateVPN offers you a personalized matchmaking service that helps you access any region and any game through a reliable connection whenever you want.

PrivateVPN also provides state-of-the-art security with AES 256 encryption, which is more than capable of protecting you against even the most persistent snoopers and providing you with fully private internet access. It also comes with unlimited bandwidth and server switches and allows you to connect up to six devices simultaneously. Moreover, it has an uptime of 99.98%. All of this enables you to conveniently game on any device without any inconvenience or connection issues.

ExpressVPN offers a great all-around CS: GO gaming experience. With apps available for all the major gaming platforms, this VPN allows you to play Counter-Strike: Global Offensive on any supported device of your choosing. With 160 server locations in 94 countries, ExpressVPN can provide a blazing-fast network needed for high-performance gaming.

Aside from its excellent suitability for CS:GO, ExpressVPN offers a very robust service capable of unblocking any other site, service, or streaming platform on the internet. However, the quality does come at a fairly high price, as ExpressVPN is significantly more expensive than basically any different VPN provider from this list.

What Are the Benefits of a VPN for CS:GO?

There are many benefits you can have thanks to connecting to a VPN to play CO:GO. Some of them are mentioned below:

Thanks to a VPN with a huge choice of available servers and locations, you can significantly enhance your connection speeds. For the best results, it is recommended to pick a server that’s located relatively close to you. Also, it is a good practice to avoid overcrowded servers.

Playing CS:GO Even in a Very Restricted Country

Sadly, some countries like South Korea, China, and Venezuela have banned CS:GO along with many other video games that involve shooting human targets. Thanks to a VPN, you can change your IP to a different country, and your real location will not be a problem anymore.

It happens that CS:GO players get banned for improper actions and need to wait till they can join the game again. However, the best VPNs can make it possible to avoid that and return to the game with a different IP without leaking your actual one.

Unfortunately, there are some revengeful players in CS:GO, and they tend to punish players who beat them with DDoS attacks (Distributed Denial-of-Service attacks). It means that a large number of “bots” attack a chosen target, making them offline. As you can hide your real IP with a VPN, potentially hostile players won’t be able to reach you.

Your internet service provider may have an awful tendency to slow your network connection when you start such a fun online activity as gaming or streaming that requires a quick operation. With a fast VPN, you can enjoy playing CS:GO without any significant slowdowns.

What To Do if CS:GO Doesn’t Work With a VPN?

It sometimes happens that a particular VPN can face some difficulties with compatibility with Counter-Strike: Global Offensive. That’s not a huge problem, though, as it can be quickly and easily fixed in most cases.

Here are some of the steps you can take to make your VPN service work for CS:GO:

Using a VPN to play CS:GO can better your online gaming experience and protect you against security threats such as DDoS attacks and other potential dangers. When playing CS:GO through the most reliable and fastest VPN, you’ll be able to go around geo-blocks, reduce your ping, and enjoy playing against gamers from any region of the world.

But, for that to be true, you should always stray away from using a free VPN for gaming and be sure that you pick a reliable VPN that you can trust. Try one of our recommended VPNs and improve your Counter-Strike experience in just a few simple steps!