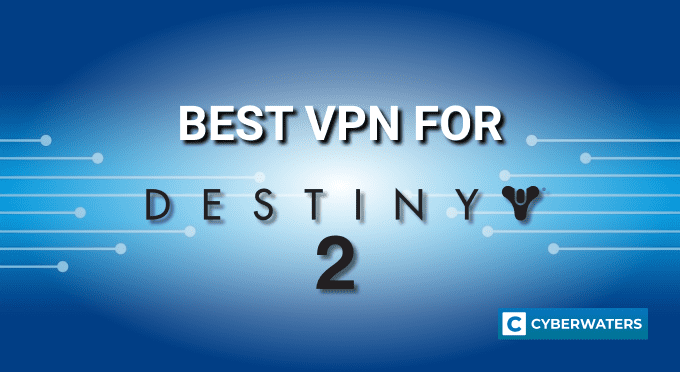 First released as a pay-to-play game, Destiny 2 is a free-to-play game that enjoys massive popularity in the gaming community. It’s a well-polished, fun, and very interactive FPS. But, like all online games, it’s not free from lags, connection drops, and server issues. Plus, there’s also the always present threat of DDoS attacks and security breaches.

Here are the best VPNs for Destiny 2:

Why You Need a VPN for Destiny 2

There are several considerable reasons why you should use a VPN for Destiny 2. Let’s take a close look at each of them:

Bungie allows its players to play Destiny 2 with a VPN. If you’re just using a VPN to play safely and aren’t engaging in any suspicious activities, you won’t get banned. Going by the information from Bungie’s official forum, you’re free to use VPN as long as you’re playing by the game’s rules.

If you’re worried about getting in trouble for using a VPN, consider setting up the VPN for Destiny 2 on your router instead of your PC. Going by user experiences on Reddit, setting up and playing Destiny 2 this way does help minimize your overall detectability.

There’s one other thing to remember if you’re playing Destiny 2 on PC. Since the PC version of the game is only available on Steam, you have to stay in line with Steam’s VPN rules . This means that you can’t buy any games when connected to a VPN. Also, you can’t take advantage of any regional perks the VPN would provide you with.

Looking at the long string of gaming-oriented features NordVPN comes with, it’s safe to say that it’s the ultimate VPN for Destiny 2. The service provides over 5,400 lighting fast gaming servers in 59 countries. Numbers aside, NordVPN has created a highly-performing custom protocol called NordLynx. This protocol offers you maximum performance and allows you to get the most from your connection when gaming.

With NordVPN, you can count on breakneck gaming speeds for Destiny 2. More importantly, you can rely on powerful security features that will keep you safe at all times. This industry-top VPN ensures maximum DDoS protection, strong encryption, and secure RAM-based servers.

You can also get a dedicated IP if you want to be extra sure that no one can share the same address with you when playing Destiny 2. In addition to all of these features, NordVPN is also one of the most cost-effective VPNs you can get. Plus, it comes with a 30-day money-back guarantee, so you won’t risk a single cent if you decide to try out their service.

Surfshark doesn’t overpromise on what it can do. And, when it comes to gaming, it can do a lot. The service offers more than 3,200 servers in 65 countries worldwide. Additionally, all of these servers have private DNS and come with a strict no-logs policy. What’s more, Surfshark’s above-average server speeds are backed up by a kill switch and a Camouflage Mode.

It might not be the fastest or most powerful VPN service for gaming, but it certainly ranks close to the top in all of these aspects. Surfshark combines robust features and a user-friendly interface to offer one of the best VPN services for gaming. If you’re planning to get a long-term VPN, Surfshark’s extended subscription plans are unbeatable.

When it comes to online gaming, Atlas VPN has strong features to offer. Most gamers face occasional freezes, lags and pings while gaming, and it can affect the process of the game very seriously. Atlas VPN has more than 750 servers worldwide with WireGuard® protocolto ensure a secure and seamless gaming process. Atlas VPN hand-picks the ideal server for you according to distance, download speed, and latency will find the best suitable server for you, by simply tapping the Connect button.

Unlimited connections feature is another advantage from Atlas VPN, allowing you to play securely with your friends and family. It is compatible with all popular platforms and allows unlimited simultaneous connections.

All these useful features make Atlas VPN the best VPN for Destiny 2. It comes with three different payment plans and with a 30- day money-back guarantee!

PrivateVPN offers over 200 server locations spread across 63 countries worldwide. This accounts for a very healthy and speedy gaming server network. It doesn’t have any bandwidth limits or restrictions for server switches, and you can connect up to six devices with just one subscription plan. PrivateVPN’s apps are very simple and streamlined. This makes this VPN one of the best picks for beginner VPN users looking for a simple VPN to play Destiny 2 with.

Security-wise, PrivateVPN also doesn’t fail to impress. This VPN provides strong DNS leak protection, IPv6 leak protection, and a reliable automatic kill switch. It has advanced VPN encryption and comes with multiple connection protocols. Along with a zero-logs policy, all of these features ensure a safe and secure gaming experience when playing Destiny 2.

ExpressVPN ranks among the very top services in the industry in all aspects, including gaming. It has over 3,000 high-speed servers, all equipped with their super-performing Lightway protocol. On the security side, you can count on several advantageous features when playing Destiny 2. These include best-in-class encryption, private DNS on every server, and DDoS protection.

The service offers top-quality apps for all major platforms. It’s also compatible with a long list of routers, allowing for convenient gaming across all devices. Besides being one of the best VPNs for Destiny 2, ExpressVPN can provide you with many more features. It supports torrenting/P2P file sharing. It can also unblock any major streaming site.

Can I use a VPN to play Destiny 2 Competitively?

Yes, using a VPN is the best way to go about it if you’re playing Destiny 2 competitively. This is because the competitive scene can often get toxic, and some players go out of their way to cause trouble to their opponents. With a VPN, you can play freely without fear of getting DDoSed or knocked out of the game.

Yes, you can set up your PS4 to play Destiny 2 through a VPN. The easiest way to do so is to set up the VPN service directly on your router. That way, all of your network’s traffic will be encrypted, including your PS4. This is the most efficient method for setting up a VPN for PS, Xbox, or any other gaming device.

Can I use a free VPN to play Destiny 2?

No, we recommend you avoid using a free VPN for gaming. Besides free VPNs being known underperformers, they also come with a more worrying underlying issue. They are not safe to use, as most free VPNs are out-and-out scams. They harvest your personal data and don’t do a good job protecting your online identity.

Can a VPN lower my ping in Destiny 2?

Yes, a VPN can lower your ping in Destiny 2 and give you an edge over your opponents. You can lower your ping if you connect to a nearby server capable of providing fast connection speeds. Be mindful, as connecting to a remote server will actually increase your ping and lead to more in-game lag.

All things we’ve discussed above considered, playing Destiny 2 with a VPN is overwhelmingly advantageous. There are no substantial drawbacks to using a VPN for Destiny 2. You won’t get banned for using it, and your performance and security are only set to improve.

Every VPN we’ve talked about on this page is capable of providing you a top gaming experience. Hopefully, the information we’ve shared with you on each of them is enough for you to pick the most suitable service based on your need. If you’re still unsure which VPN is best for you, we recommend NordVPN as the top VPN for Destiny 2.