5 Best VPNs for qBittorrent (+ How to Use It With VPN) 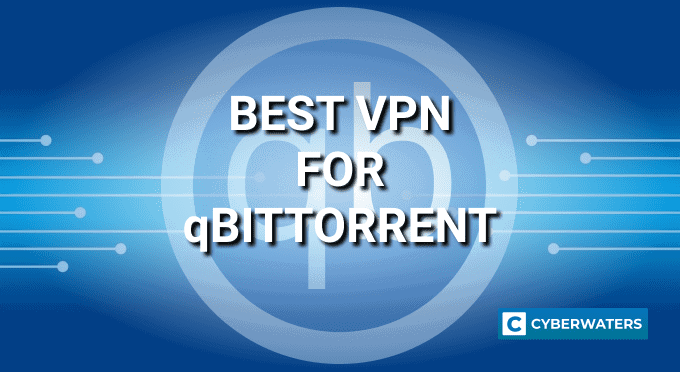 Power users who prefer qBittorrent over other torrent clients have their reasons. They are ad-free torrenting, port forwarding, and IP binding. However, one function that still eludes them is a built-in virtual private network. There’s no denying that VPNs make torrenting a lot safer, letting you sleep peacefully at night as you continue seeding your favorite torrents.

As we collectively wait for a torrent client with built-in encryption and IP hiding features, we have to take some extra efforts to cover our tracks while lurking in “the scene”. If you are a qBittorrent user, this quick guide on the best VPNs and the process of setting it up is all you will ever need.

Here are the best VPNs for qBittorrent:

What Features to Look for in a VPN for Torrenting?

Simply setting up a VPN with qBittorrent, however, is not enough. You need to press the right buttons and set it up according to your needs to utilize the best of both worlds. The ease and convenience of qBittorrent and the security of VPN without affecting your download speed and peer discovery.

In that regard, here are the most critical features or factors to look for when choosing the right VPN for qBittorrent:

In addition to these, check if the VPN ensures no DNS or IP leaks, both of which can compromise your Internet identity.

Some VPNs are better equipped to handle P2P traffic, owing to the quality of their servers. All the five VPNs that we have listed here are capable of taking care of your torrent traffic. Just switch them on and forget about torrenting concerns forever.

We recommend NordVPN the most for torrenting because of its Specialty Servers that are ideal for P2P traffic. Simply install it on your computer, choose a Specialty Server, and you are done. NordVPN will automatically connect to an ideal server that is closest to you and is also better for torrent traffic.

Another critical feature of NordVPN is the double kill switch. NordVPN will not only shut off the Internet but will also shut down the torrent client (app kill switch) if it detects an issue with its server connection. This is important because VPNs do tend to lose connection occasionally. During this disconnection, your torrent client can expose your IP address. Having a kill switch, therefore, is absolutely essential for a foolproof torrenting setup.

Our only gripe? The OpenVPN protocol throttles the speed to nearly half. Use the NordLynx protocol whenever possible to get decent speeds. This protocol is based on the WireGuard protocol and the Double NAT system, both of which strongly enforce the no-logs policy of NordVPN. You won’t have any of your data stored in the servers.

In the torrenting world, who doesn’t like a seeder? And what seeder wouldn’t like if their upload speeds could shoot up by a few Mbps?

That’s where Surfshark VPN can help you while torrenting. In our tests, we saw that Surfshark’s local servers improved the upload speeds by up to 50%. Making it the best VPN for prolific seeders and active file-sharers who use qBittorrent. It’s like the cheaper alternative to a seedbox. (Surfshark will also be the best choice if you suspect that your ISP is throttling your torrent speed.)

There’s a good reason qBittorrent is so popular amongst all avid torrent users. But for the best use of it, it should be accompanied by a VPN. Atlas VPN is perfect for that and can be considered as the best VPN for qBittorent in general. Atlas has more than 750 servers around the world which allow great speeds and the best thing of it all -it has P2P servers specifically for that.

Along with P2P servers it has all the basic cybersecurity features like a good encryption, a well working killswitch and a no logs policy. Added bonus being a 30-day money back guarantee and unlimited simultaneous connections, not to mention that it’s a very budget friendly option.

PrivateVPN provides a solid server network that covers over 200 server locations across 63 countries. All of these server locations are P2P-friendly. Privacy-wise, the service doesn’t keep any data logs so that you can torrent in maximum privacy.

The service also comes with torrenting-specific features that allow for faster and more convenient P2P file sharing. Most notably, this includes port forwarding. This feature allows you to reroute incoming connections and create a more streamlined and direct network. Equally as important, PrivateVPN doesn’t put any data bandwidth caps. In other words, you can enjoy fast connection speeds to download as much content as you want.

Lastly, another thing that makes PrivateVPN such an excellent VPN for qBittorrent is its low subscription price. If you opt for one of the extended plans, you can enjoy all of the advantages his VPN brings to the table for a little over two dollars a month. When you consider all of PrivateVPN’s features, this is undoubtedly a great bargain.

ExpressVPN gave extraordinary results in our torrenting speed tests. On a broadband connection that gives a file download speed of 1.5 MBps, ExpressVPN’s protection had zero-to-no throttling. While this result may differ depending upon the seeds-peers ratio and overall health of the torrent, it is the fastest VPN we found for torrenting.

There’s also the automatic Smart Location feature that optimizes your P2P connection. If you are a prolific torrenter, ExpressVPN should be your first choice.

It has a kill switch, DNS leak protection, split tunneling and a strong no-logs policy. If you’re on the fence between this and NordVPN, consider the price as the deciding factor.

Do You Need a VPN with qBittorrent?

The answer is yes.

Having a VPN in place allows you to block your IP address from showing up in public trackers and peer lists. Every time you try to download or upload a file over a peer-to-peer (P2P) network, your IP address becomes public via the tracker (unless it’s private). This can mean trouble if the file in question is of interest to its copyright owner. (Think Hollywood clamping down on users who download the latest Oscar-winning limited release.)

This applies to all top torrent clients including qBittorrent that do not have a strong built-in protection mechanism. Sure, outdated RC4 encryption exists in qBittorrent but does nothing much other than limiting peer connections. Then there is port forwarding that helps increase the number of peer connections. And IP filtering is as good as placebo in 2022. But none of them help you stay anonymous.

A VPN, in essence, can hide your IP address by routing your connections via a server. Anyone – read copyright enforcers – who see you on a peer list sees the arbitrary IP of that server. It protects you from undesired copyright strikes from your ISP, or worse, from court subpoenas being slid under your main door.

qBittorrent is similar to uTorrent that way; it needs a VPN to hide your IP address. We have discussed this in detail before and the bottom line is that you should use some sort of protection to cover your tracks when torrenting.

Note – qBittorrent has an ‘anonymous mode’ that simply hides metadata and is not as effective as using a VPN.

How to Set Up qBittorrent with VPN?

Setting up qBittorrent with your choice of VPN is easy. There are essentially three ways to do so, with each one of them providing varying levels of protection.

Follow the steps outlined below to use qBittorrent with your VPN client:

This will route all your torrent traffic through the VPN server. The drawback of this method is that sometimes the kill switch may take time to activate. And in the meantime, your original IP address will be broadcast to your peers. Putting your computer on sleep or hibernation mode can cause this.

To get another layer of foolproofing, you can use the IP binding feature of qBittorrent.

What this essentially does is route your torrent traffic only via the VPN interface’s server. If the VPN fails, qBittorrent will instantly stop its connections. This method functions just like a kill switch that is entirely foolproof. Better to stop your torrent downloads than to expose your IP address, right?

Pro Tip – You may set up a firewall rule to force all torrent traffic via a VPN adapter along with IP binding for a better setup.

This is the third method – similar to the IP binding one – that depends largely on the VPN client. Only ExpressVPN and NordVPN have this feature, which is called split tunneling. Here’s how to set it up:

With this, The VPN routes all torrent traffic from qBittorrent through its selected server. And all other communication such as browser and software updates will happen directly via your original Internet connection.

If we had to compare the three methods, we would put it this way:

Answers to some of the most commonly asked questions about using qBittorrent with VPN:

Is qBittorrent safe without a VPN?

No. Although qBittorrent is generally a safe torrent client and has basic protection functions in place, they are not enough to hide your IP address in peer lists.

Why is qBittorrent not downloading with VPN?

Either qBittorrent or VPN may not be properly set up. Consider switching ON port forwarding and IP binding, or try changing the VPN server.

What is the best VPN to use with qBittorrent?

We recommend NordVPN, ExpressVPN, Surfshark, PIA, and PureVPN as the best clients that work with qBittorrent.

Is IP binding better than split tunneling in qBittorrent?

IP binding is configured on qBittorrent and also utilizes the kill switch feature of VPN. Therefore, it is a better way to anonymize yourself while torrenting than split tunneling.

Is it necessary to bind in qBittorrent?

No. IP binding is optional, but we highly recommend it as the best way to protect yourself.