Is Surfshark Good for Torrenting in 2023? 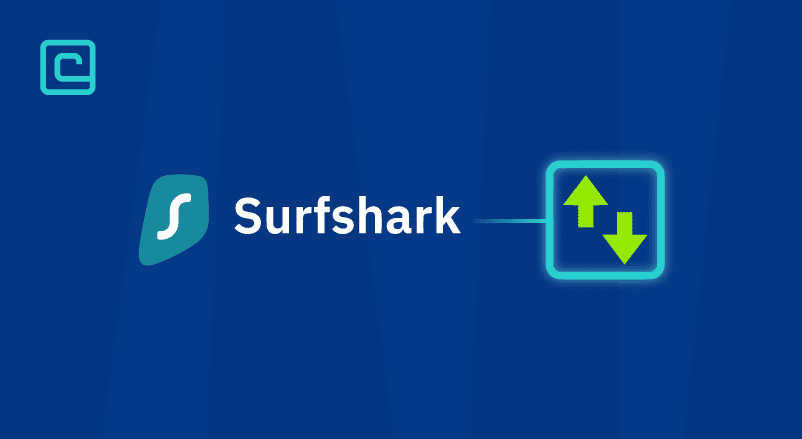 Surfshark is among the top VPNs on the market, but how good is it for torrenting? We did some research, reached out to their reps, and ran some tests to see how well Surfshark handles torrenting.

Surfshark is among the top VPNs on the market, but how good is it for torrenting? We did some research, reached out to their reps, and ran some tests to see how well Surfshark handles torrenting.

Is Surfshark Good for Torrenting?

Surfshark is an excellent torrenting VPN. It provides all the necessary tools to secure your torrenting traffic. Strong encryption (with WireGuard support), P2P support on most of its servers, as well as a strict no-logs policy.

The VPN works well with most popular torrenting clients, including uTorrent and qBittorrent. Torrent download speeds are quite fast, and are comparable to other industry giants (which we’ll see in a minute). We also enjoy the fact that it has no device limits, so you can safely torrent on all your gadgets.

However, it does lack a few speed-enhancing features (such as port forwarding and SOCKS5 support). Moreover, it lacks decent IPv6 leak protection, requiring users to disable IPv6 manually on their systems.

We discuss all these factors (and more) down below. We’ve also prepared a few good Surfshark torrenting VPN alternatives (+comparisons) if you want to explore other options.

To see how fast torrenting with Surfshark is, we ran a few tests. We used qBittorrent and uTorrent, servers in Canada, Singapore, and Japan, and the WireGuard protocol. For reference, our tester is from Romania.

Here are the speeds with the other servers:

The slowdown isn’t surprising. We used servers that were really far from our tester’s location. So, it took longer for data to travel between their device and the VPN servers. And even though WireGuard is lightweight, the encryption made the data packets heavier (meaning it took them longer to arrive).

We were still happy with the download speeds. We also used a VPN server location close to the tester (Bulgaria) to get faster downloads. The speed boost was noticeable: 18-19 MiB/s (qBittorrent) and 7-9 MB/s (uTorrent). It took us about 40-45 minutes to download a 33.92 GB file on qBittorrent, and 1 hour 40-50 minutes on uTorrent.

We also used the OpenVPN protocol while connected to the Bulgarian server. As expected, we had slower speeds: 8-12 MiB/s (qBittorrent) and 1-2 MB/s (uTorrent).

What Do People Think About Torrenting with Surfshark?

We checked multiple Reddit threads to see what torrent users think of Surfshark. We also asked about the Surfshark torrenting experience on Reddit. It’s the best site to find unbiased opinions. We also tried finding reviews on torrent client forums, but we didn’t find anything worthwhile.

Overall, it looks like people are happy with this VPN, and don’t experience major slowdowns.  Also, most Redditors said they never got angry letters from copyright agencies (or trolls), and trade associations.

Advantages and Disadvantages of Using Surfshark for Torrenting

Surfshark isn’t the perfect torrenting VPN, but it does get pretty close. Here are the pros and cons of using Surfshark for torrenting.

First off, the pros – and there are quite a few of them.

Surfshark supports torrent downloads and seeding on many dedicated P2P servers. Support reps have confirmed that trying to torrent on a regular server will instead redirect your traffic to a P2P server.

We always get lightning-fast speeds with Surfshark. It’s easy to find a server that’s close to our location (they offer better speeds) and we can use the WireGuard protocol (which is extremely fast).

Surfshark doesn’t monitor your browsing and downloads. Copyright agencies and lawyers can’t force them to hand over data about people who torrent (there isn’t any to begin with).

Surfshark automatically protects you from DNS and WebRTC leaks (useful if you’re using a browser-based torrent client). Unfortunately, Surfshark doesn’t guarantee it will protect you from IPv6 leaks, so you need to disable IPv6 while using it.

Surfshark secures all your data with AES-256 encryption (the strongest cipher there is). And all their servers only run on RAM, meaning any stored data is automatically deleted when the server shuts down.

Surfshark’s apps are available on most platforms (including Linux), and they have a very intuitive design. You’ll quickly get used to them even if you’ve never used a VPN.

Surfshark’s kill switch won’t let you use the Internet until you connect to a VPN server. It’s an extreme measure, but it protects you from accidental traffic leaks.

This is Surfshark’s split-tunneling feature. You can use it to route only torrent client traffic through the VPN. That way, you get faster speeds because there’s less data to encrypt and decrypt.

We tested Surfshark with the most popular torrent clients (qBitorrent, uTorrent, BitTorrent, Vuze, Deluge), and it worked without issues.

This is Surfshark’s ad blocker. It won’t stop ads in uTorrent, but it will block connections to malicious links and sites (useful when dealing with shady torrent sites and trackers).

You can use Surfshark for torrenting on as many devices as you want at the same time.

Surfshark is a great torrenting VPN, but it does have three issues:

Surfshark doesn’t allow port forwarding because it considers it a security risk. Basically, they’re worried that opening up random ports might create security vulnerabilities which hackers can exploit.

Many torrent users love port forwarding because it lets them connect to more peers. In theory, that means you get faster speeds. But that’s not a guarantee.

2. It Has No SOCKS5 Support

SOCKS5 lets you change your IP address without adding encryption. Now, the lack of encryption may be a problem if you’re worried about your ISP spying on your torrent activity.

However, SOCKS5 is a good way to hide your IP in the swarm while also increasing download speeds. Unfortunately, Surfshark has no SOCKS5 support. Not a big deal in the grand scheme of things, but worth mentioning for those with slower connections.

As mentioned, the provider has great DNS and WebRTC leak protection. However, Surfshark doesn’t provide support for IPv6 addresses in their apps just yet. You’ll need to manually disable IPv6 on your system. Luckily, they have an easy guide for it on their website.

Comparing Surfshark to Other P2P VPNs for Torrenting

Here is a quick overview of how other VPNs compare to Surfshark for torrenting purposes:

NordVPN is a Panama-based provider, a jurisdiction with strong privacy laws. It keeps no user logs (with an audit to prove it), has 5,000+ P2P servers worldwide, and provides great torrenting speeds.

For security reasons, NordVPN has no port forwarding support. Unlike Surfshark, you can enable SOCKS5 connections for a speed increase (at the cost of encryption).

ExpressVPN is based in the British Virgin Islands – once again known for privacy-focused laws. Their no-logs policy has undergone a successful audit. Only fully anonymized diagnostics data is collected.

All servers are P2P-enabled, have excellent speeds, and the provider supports port forwarding on routers. That said, its five-device limit and higher-than-average price point may deter users.

Atlas VPN is a US-based provider – putting it square in the middle of the “Five Eyes” countries, which might worry some torrent users. Despite this, the provider keeps no user logs outside app usage data for diagnostics.

Plus they have a free plan and amazing speeds. You also get support for unlimited devices on premium subscriptions, much like Surfshark.

Should You Use Surfshark VPN for Torrenting?

Yes. Whether you’re torrenting games, movies, or TV shows every once in a while, Surfshark is perfect for you. The fact that you can use it on unlimited devices also makes it a great option for account-sharing. Securely torrenting work files, photo albums, and other large files between friends or co-workers has never been easier.

The VPN has a fast network of P2P servers comparable to its main competitors. You also get a helpful split tunneling feature (Whitelister) to speed things up. Throw in a kill switch, NoBorders mode, and CleanWeb for a fully secure torrenting experience anytime, anywhere in the world.

That said, you shouldn’t use it if you need to maintain a high seed ratio or need to massively download torrents every day. It’s better to use a seedbox for that (like Seedbox.io). Surfshark also isn’t ideal if you’re after port forwarding or SOCKS5 support.

Here are answers to the most common questions we get about Surfshark and torrenting:

How to Use Surfshark for Torrenting

Subscribe to Surfshark, then download and run their app. Search for “P2P” in the Locations section and connect to the closest server to you. Now run your torrenting client as usual.

Yes, Surfshark allows P2P traffic on their dedicated torrenting servers. Right now, Surfshak has around 80+ P2P servers in 20+ countries. That makes it easy to find servers that are not overcrowded and are close to your location (to get better speeds).

Most P2P servers have a dynamic IP (it changes every time you connect to the server). But if you want to use a static IP (an address that always stays the same), Surfshark has around 30+ P2P servers which offer that option.

Yes – here’s what you should try:

Does Surfshark Limit Your Data?

No, Surfshark offers unlimited data with all its plans. You don’t need to keep an eye on bandwidth caps between downloads.

What Happens If You Torrent on Surfshark’s Non-P2P Servers?

According to Surfshark’s support reps, the app routes your traffic to a P2P server. Unfortunately, that means your speeds will slow down. Sometimes, your downloads might stop entirely. Surfshark can’t just disconnect and connect you to a P2P server as that would be a security breach (it would expose your IP).

We tested that by torrenting over their Australian and New Zealand servers. We either got zero speeds or very slow speeds (kB/s not MiB/s or MB/s). Stick to Surfshark’s P2P servers instead.

The best P2P server to use is the one that’s closest to your location. That way, you get better speeds because data packets travel faster between you and the VPN server.

We asked Surfshark’s support reps if they have a specific P2P server they recommend, and they said the same thing: just use the nearest one.

No seeding = no torrenting. A torrenting community composed only of leeches cannot possibly survive. I can’t understand what sort of pathological liars would claim that a VPN supports torrenting if it doesn’t support seeding.

Surfshark is the worst vpn ive tried. I used more than 5 over the years.
it often leaks and even drops while leaving torrent client exposed.
customer service is abysmal.

Unfortunate to hear that. When we did our tests, it seems to work great without any leaks. I think in 2022 the situation has much improved.