Is Vuze Safe? (Yes, But There Are Some Issues) 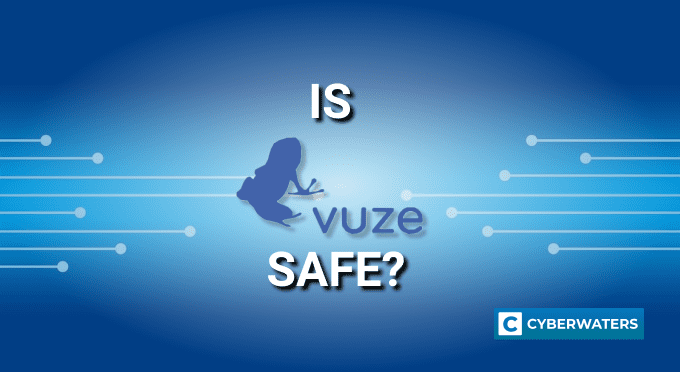 Many people download torrents using Vuze, making it a pretty popular torrent client. But is Vuze safe? Or are there any risks?

We’ll discuss that in-depth in this guide. Don’t think of this as a Vuze review, though. Think of it more like a security guide that shows you how to use Vuze safely.

But some torrent users on Reddit don’t like Vuze because it uses ads. Also, it sometimes comes bundled with unnecessary programs. Examples include browser toolbars or free antivirus programs. When we installed it, we were prompted to install AVG’s free antivirus.

How to Use Vuze Safely

While Vuze is safe to use, downloading torrents with it can be risky. Here are a few quick tips that will make it safer to use Vuze to download movies, video games, and music.

VPNs are apps that encrypt your Internet traffic and hide your IP address when you’re online. Many torrent users rely on VPNs to secure their torrenting activities.

By hiding your IP address, VPNs prevent anyone in the torrent swarm from seeing it. That means copyright trolls and lawyers can’t collect it. Without your IP address, they can’t find your ISP to send them threatening letters. Also, because your IP is hidden, wannabe hackers can’t use it to DDoS you.

VPNs also hide the IPs you connect to. That means your ISP can’t see that you’re connecting to IPs that belong to torrent trackers.

And VPNs encrypt your traffic to make sure ISPs don’t know you’re downloading torrents. If they eavesdrop on your connections, they’ll only see gibberish. Besides that, some VPNs have ad blockers that protect you from malicious sites. It’s a nice safety net to have in case you accidentally click on a link that takes you to a fake torrent tracker.

There are many good P2P VPNs out there, but we prefer using NordVPN. It has excellent torrenting support because it allows P2P traffic on 4,600+ servers. It also has very fast download speeds, and it works well with Vuze and other torrent clients. NordVPN also offers powerful encryption, an audited no-logs policy, and a kill switch. It has cheap prices, a 30-day refund, and a reliable ad blocker called CyberSec.

But if you’re interested in checking out other P2P VPNs, please read our guide.

How to use Vuze with a VPN:

Vuze might be safe to use, but that doesn’t mean all the torrents you download are safe. Some of them might be fake torrents uploaded by hackers. They could contain malware that infects your device once you interact with the downloaded files.

If that happens, malware will take over your device. Hackers could compromise your data with ransomware, spyware, adware, or trojans.

To protect yourself, you need to install antivirus software on your device. It’s a program that’s designed to detect and remove any trace of malware. Always keep it running while you use Vuze. And make sure you keep it up-to-date. Otherwise, it can’t detect the latest malware strains.

And by the way – you should use an antivirus program together with a VPN when downloading torrents. They go hand in hand: the VPN hides your torrenting traffic, and the antivirus protects you from malware.

Just because you use antivirus software doesn’t mean you should download anything you come across. Take a second or two to inspect the torrent to make sure it’s safe to download and use.

If the torrent tracker has a comments section, read what other people are saying about the torrent. And check the file type and size too. If you’re downloading the latest blockbuster movie, it shouldn’t be a 2-3 MB .exe file.

There are a few other things you can do to make torrenting safer. We covered those tips on safe torrenting guide, so be sure to read it.

We answered the most common questions people have about Vuze being safe in this section. If you need more answers, just drop us a line in the comments.

Which Is Better – Vuze or uTorrent?

Both torrent clients are safe to use. Some torrent users prefer Vuze over uTorrent, but not by much. According to many Redditors, Vuze and uTorrent have similar issues. They both have ads, bundle their software with unwanted programs, are closed-source, and are memory-hogs.

In terms of UI, uTorrent is easier to use. Its dashboard isn’t as overwhelming as Vuze’s interface for people new to torrenting.

But, in the end, many people don’t like uTorrent because the devs used to bundle the software with a cryptominer. Torrent users have complained about Vuze going downhill too over the past years. But there haven’t been any privacy scandals as there have with uTorrent.

No, Vuze isn’t open-source. You can’t inspect the code to make sure everything is in order. It’s one of the main reasons some torrent users don’t like Vuze.

What Is a Good Vuze Alternative?

Most Redditors recommend qBittorrent, Deluge, and Transmission as Vuze alternatives. Many torrent users prefer these torrent clients because they’re open-source. So, it’s easier to trust them. Besides that, these apps are also ad-free, so they don’t consume as much memory as Vuze does.

Is Vuze Safe Without a VPN?

Vuze is safe as a torrent client, but torrenting with it isn’t safe without a VPN. Your traffic won’t be encrypted, so your ISP will know you’re downloading torrents. If that’s against their rules, they might terminate your account. Also, everyone in the swarm will be able to see your IP address.

To torrent safely with Vuze, you need to use a VPN that allows P2P traffic. We recommend NordVPN because it always performs very well in our tests.

Should You Enable Encrypted Connections?

No, it’s not necessary to enable encrypted connections in Vuze. If you do, you’ll only be able to connect to encrypted peers. If there aren’t enough of them, you’ll have slow speeds. You can use a VPN instead. It will encrypt your entire Internet traffic to make Vuze safe to use.

But if you want to enable encrypted connections, you need to go to Tools > Options > Connection > Transport Encryption. Once there, check the box next to Require encrypted transport.

If you don’t have access to this option, go to Tools > Options > Mode. Change it from Beginner to Intermediate or Advanced.

Can You Disable Ads in Vuze?

Yes, you can disable ads in Vuze, but only temporarily. To do that, head to Tools > Plugins > Uninstallation Wizard… and check the box next to Promo View. Click Finish, then click Remove. Then choose whether you want to restart Vuze now or later.

But like we said – you can’t get rid of ads completely in Vuze. Using this method will only remove them temporarily. After 10-20 minutes, the Promo View plugin will be reinstalled and the ad will show up again. It looks like the ads stay gone for a longer period if you don’t restart the app. But they’ll still show up again eventually.

And no, VPN ad blockers can’t get rid of Vuze’s ads. They can only stop ads from loading in your browser, not inside the apps installed on your device.