Is uTorrent Safe? (There Are Some Concerns) 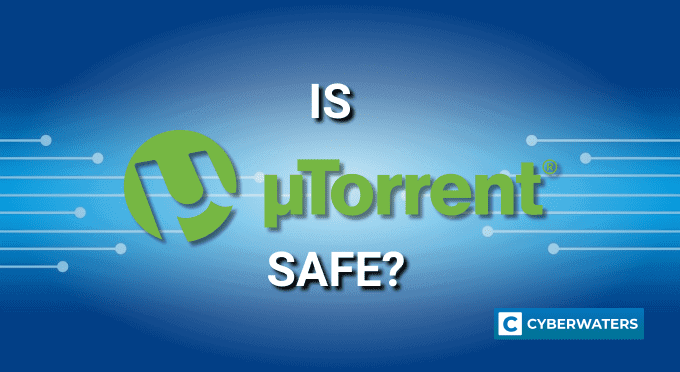 Despite some controversy, uTorrent continues to be a popular torrent client to this day. But is uTorrent safe to use? Or will it put your privacy and device at risk?

We’ll answer that question in-depth in this article. Also, we’ll show you how to make uTorrent safe with a few simple actionable tips. And at the end, we’ll answer some frequently asked questions.

Yes, uTorrent is safe to use as long as you download the latest app version from the official site, which is free of malware. It’s also legal to use uTorrent as long as you don’t download copyrighted content. But to torrent safely and privately with uTorrent, you should use a VPN.

But many torrent users don’t trust uTorrent because the devs once bundled it up with a cryptominer. Besides that, uTorrent also has other issues – like ads and annoying bloatware.

We checked multiple threads on Reddit and uTorrent forums and compiled the most common complaints about uTorrent not being safe in this list:

It’s safe to download from uTorrent as long as you download legit, secure files and use a VPN. If you download malicious torrents, your device will be infected with malware like ransomware, spyware, adware, or trojans. Always use an antivirus to be 100% safe.

And if you don’t use a VPN with uTorrent, your ISP will be able to see that you’re using torrents sites. They’ll also be able to throttle your torrent traffic. And copyright trolls will see your IP in the torrent swarm, which they can then use to track down your ISP.

Also, you shouldn’t click on the ads you see in uTorrent. They’re probably harmless, but you never know when you might be exposed to a malicious ad that redirects you to a phishing site.

How to Make uTorrent Safe

Here’s a list of things you can do to make uTorrent safer:

A VPN is a torrent user’s best friend. It’s an online service that hides your IP address and encrypts your traffic. VPNs are essential because they can secure your privacy when you use uTorrent.

Because VPNs hide your IP address, nobody in the torrent swarm can see it. Copyright agencies can’t collect it and track your ISP with it. Also, wannabe hackers can’t use your IP to locate your network and DDoS it.

And because VPNs encrypt your traffic, ISPs can’t spy on it. They won’t see that you’re sending requests to rargb.to. Instead, they’ll just see gibberish like GH53jgfsgfusFHdsh3. So, they can’t send you angry letters because you’re torrenting on their network. Also, they won’t be able to slow down your torrenting speeds, which they might do to passive-aggressively encourage you not to torrent.

VPNs also have ad blockers. Unfortunately, they can’t block ads in uTorrent. But they can block connections to malicious sites, meaning they keep you safe if you click on shady ads or interact with unsafe torrent trackers.

There are many good torrenting VPNs on the market. But we like NordVPN the most. It has excellent torrenting support on 4,600+ P2P servers and very fast downloads thanks to its NordLynx protocol that’s built around WireGuard technology. NordVPN is also easy to use, and it offers split-tunneling which helps you boost uTorrent download speeds.

NordVPN also offers excellent security: powerful end-to-end encryption, a twice-audited no-logs policy, RAM-only servers that wipe all data with every reset, complete leak protection, and a reliable kill switch. We really like that NordVPN has an app-level kill switch. We can customize it to only prevent uTorrent from using the Internet when the VPN disconnects, leaving the rest of our online browsing undisturbed.

Use an Antivirus Program

If you’re not careful, you might end up downloading fake torrents that contain malware. If you’re downloading a movie that’s a 20 KB .exe file, your device is definitely going to be infected. But if you have antivirus software installed, you’ll be safe.

These security programs are designed to detect and quarantine malicious files. As long as you keep the software up-to-date, it will detect the newest malware strains.

It’s actually possible to remove the ads inside the uTorrent client.

Here’s how to disable uTorrent ads:

All the ads should be gone now. Unfortunately, uTorrent still has other built-in bloatware which will increase memory usage – like TronTV. We tried to disable it but the option kept re-enabling itself. Since the company behind uTorrent, BitTorrent Inc., was sold to Justin Sun, the creator of the TRON cryptocurrency, that’s somehow not surprising.

Most torrent users unanimously agree that uTorrent 2.2.1 is the best version. Apparently, after 2.2.1 released, uTorrent went into a new direction – the one everyone hates. Redditors like uTorrent 2.2.1 more because it’s lightweight, fast, and ad-free. It also doesn’t come bundled with programs nobody wants.

However, keep in mind that the newest version has more bug fixes and is more secure against security exploits. We didn’t notice any problems on our end with 2.2.1, though – except some errors during installation in Windows 10.

It’s not easy to find a legit link for uTorrent 2.2.1. We suggest asking on Reddit – particularly on r/utorrent. When we asked, we were told to make sure that the 2.2.1 download meets these requirements:

There are other things you can do to use uTorrent safely – like using a virtual machine, safe torrent trackers, and checking torrents to make sure they’re safe. We already covered those tips in-depth in this guide, so be sure to check it out.

Think uTorrent Is Not Safe? Try These Alternatives

If you think there’s no way to use uTorrent safely, we recommend switching to a different torrent client. Most Redditors agree that qBittorrent, Deluge, and Transmission are solid options. They’re easy to use, open-source, and ad-free.

Is uTorrent Safe from Being Tracked?

No. On its own, uTorrent can be tracked because it doesn’t offer built-in protection. To avoid tracking with uTorrent, use a VPN. With a VPN, you’ll stop your ISP from seeing that you’re torrenting. They won’t know you’re using torrent trackers and won’t see your torrent traffic because it’s encrypted.

VPNs also keep you safe from copyright trolls. These services hide your IP address, so copyright trolls can’t see it in the torrent swarm. Without your IP, they won’t be able to track down your ISP and flood them with threatening letters.

This is where we answer the most common questions people ask about uTorrent being safe. If you want more answers, just leave your question in the comments below.

Is uTorrent Safe for Mac Devices?

uTorrent is safe to use on Mac, but many people still prefer using other torrent clients. uTorrent on Mac still comes with bloatware and annoying ads. And the company behind it is shady. Most Mac users on Reddit say they prefer using qBittorrent and Transmission.

Obviously, if you download malicious files with uTorrent or if you download the uTorrent version that has a cryptominer, it won’t be safe for your Mac device. Malware can take over the device and compromise all your data. So you need to use antivirus programs to protect your device.

Is uTorrent Safe with a VPN?

Yes, it’s safe to download files with uTorrent if you use a VPN. This app will encrypt your traffic, which means your ISP won’t know you’re torrenting. The VPN will also hide your IP address, which will keep you safe from copyright trolls and wannabe hackers.

But you need to use a good torrenting VPN. It needs to have a no-logs policy, powerful encryption, good P2P support, a kill switch, and good leak protection against WebRTC, IPv6, and DNS leaks. We always use NordVPN with uTorrent because it works flawlessly and it’s extremely secure.

Is uTorrent Safe with a Free VPN?

What’s more, free VPNs offer poor torrenting support. Most of them have slow speeds. Waiting 5-6 hours or more for a 1-2 GB file is often the norm. Also, free VPNs use bandwidth caps – usually up to 2 GB per month. You’ll barely be able to download anything using a free VPN VPN for torrenting.

Is uTorrent Harmful to Your Computer?

Also, if your device doesn’t have a lot of RAM memory, uTorrent might be a bit harmful. It can eat up too much memory, which might cause your device to lag or freeze. In that case, you should use a lightweight and safe torrent client like qBittorrent, Transmission, or Deluge.

What Is the Best uTorrent Version?

The majority of torrent users agree that uTorrent 2.2.1 is the best version. Apparently, it’s the most lightweight version since it doesn’t come with bloatware and ads.