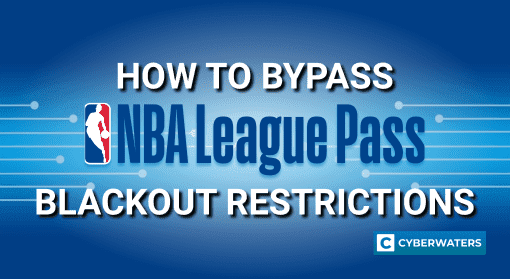 Due to licensing agreements and exclusive game rights, many NBA League Pass games are blacked out – either in some states or across the country.

The good news is you can bypass NBA blackouts if you hide your location. We’ll show you how to do that with a League Pass VPN. Also, we’ll answer some FAQs about NBA League Pass blackout restrictions.

How to Get Around NBA League Pass Blackouts

The best NBA League Pass blackout workaround is a VPN. It’s an online service that hides your IP, meaning NBA League Pass can’t use it to track down your current geo-location. Using a VPN also encrypts your traffic, meaning you can bypass bandwidth throttling too.

We recommend using NordVPN. It has user-friendly apps for most devices, very fast speeds + unlimited data, and thousands of servers. We have also been able to consistently unblock blackout NBA games with this VPN. Also, NordVPN has attractive pricing and a 30-day money-back guarantee, meaning you buy with no risk.

What Is the NBA League Pass Blackout?

An NBA TV blackout means you won’t be able to watch a certain match on NBA League Pass depending on your location. You can only watch blackout NBA Games after they have concluded and are moved to the NBA League Pass Archives.

NBA blackouts can be local and national. Local blackout games mean they’re not available in your state. National blackouts, however, mean the game isn’t available across the country.

Here’s a random example – if a game is broadcasted nationally on ABC in the US, there will be a national NBA blackout of the game.

How Does the NBA League Pass Blackout Work?

The NBA League Pass uses your IP to determine your location. It checks what country and city you are from, and what your ZIP code is. If your IP is from a state where there is a blackout, you won’t be able to watch the blackout game on NBA League Pass.

On mobile, NBA League Pass also uses your device’s GPS data to determine where you are if you enable location services.

Why Does NBA League Pass Have Blackouts?

Due to that, NBA League Pass has no option but to enforce a blackout. If it wouldn’t do that, it could get sued by the content providers that bought the rights.

Can You Watch Blackout NBA Games on Mobile with a VPN?

You normally can’t because NBA League Pass checks your device’s GPS data if you enable location services. Even if you use a VPN to hide your IP, NBA League Pass will know what your actual location is simply by checking your phone’s GPS information.

That’s only if you use the NBA League Pass apps. If you use a web browser on your phone to bypass blackout restrictions for NBA games, you should be able to do it.

Alternatively, you could try to spoof your GPS data. There are apps that let you do that on Android, though we’d recommend just using Surfshark. It’s the only VPN that has a GPS spoofing feature on Android.

Unfortunately, you can’t spoof GPS data on iOS without jailbreaking your device. We don’t recommend doing that. So, stick with the web browser instead.

Does NBA League Pass Work With a VPN?

You can bypass blackouts on NBA League Pass if you use a capable VPN – like NordVPN, for example. NBA League Pass can block VPNs – usually by blacklisting their servers’ IPs. If you use a VPN that regularly refreshes its IPs, you shouldn’t have any problems.

However, keep in mind that you probably won’t be able to bypass blackouts with a League Pass VPN if you use the mobile apps. As long as you enable location services, NBA League Pass will manage to see your location by checking your phone’s GPS data. The only solutions are to use a mobile browser instead of the app, or to use Surfshark. That VPN has a GPS spoofing feature on Android.

Can a Free VPN Help You Avoid Blackouts on NBA League Pass?

It’s unlikely that you can get around NBA blackouts with a free VPN. The service blocks VPNs that don’t refresh their IPs fast enough. Free VPNs are usually not able to do that.

Even if you manage to bypass the blackouts, using a free VPN is not worth it. It usually has slow speeds and bandwidth caps. You’re generally limited to around 500 MB or 2 GB per month. Watching a full game in 720p can eat up around 4 GB of data. So you won’t even be able to watch the whole game!

Finally, free VPNs are buggy and don’t have good customer support. And if you use free VPNs that you randomly find on the app store, they might even log your data and expose you to malware.

Can You Watch NBA League Pass Blackout Games Without a VPN?

Yes, you can if you have a cable subscription that has the channels which broadcast the blackout game. For example, if ESPN broadcasts the NBA game, you need a cable subscription with ESPN. But cord-cutting is pretty popular nowadays, so this isn’t a viable option. Though many people actually borrow friends’ or family members’ cable accounts to get around blackouts.

You can also watch blackout games on sports streaming services. They just need to have the channels that broadcast the games. Unfortunately, this isn’t the most affordable option.

One last League Pass VPN alternative you can use is a proxy. It hides your IP just like a VPN, so it can bypass blackouts. You might even get faster speeds because the proxy doesn’t use powerful encryption – or any encryption at all. That means you’ll get less privacy and security, however.

NBA says that its League Pass Audio service is free of blackouts. So you can use it to get rid of these restrictions.

But keep in mind you only get the audio. If you want to watch the game instead of just listening to it, NBA League Pass Audio just won’t cut it.

Can You Unblock Raptors and Utah Jazz Games with a VPN?

Yes, you just need to connect to a server where the games are available.

For Raptors games, it’s enough to use a server in a different country to bypass national Canadian blackouts.

For Utah Jazz games, you’ll need to use a server in a state that’s outside the NBA blackout map.