5 Best VPN for Satellite Internet in 2023 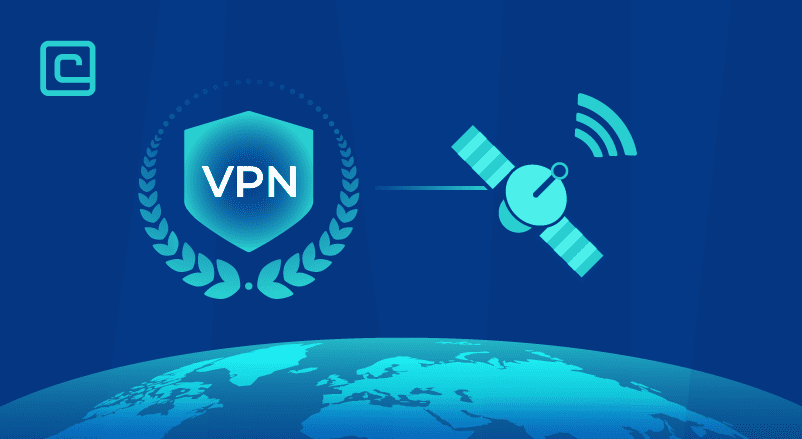 Satellite Internet isn’t built for speed, but to provide Internet access to rural and isolated areas. Unfortunately, VPNs also have a significant effect on your overall speeds. The best way to keep your data private while maintaining a stable connection is with a reliable satellite VPN service.

You’ll also be able to unblock plenty of content from abroad with a satellite VPN. Not every provider can get around VPN blocks on platforms like Netflix, though. Nor do they all provide the necessary speeds to work on a satellite connection.

A quick look at the Best Satellite VPNs:

Does a VPN Work with Satellite Internet?

Yes, a VPN can work over a satellite Internet connection. However, keep in mind that your traffic will be encrypted and have to pass through a VPN server first. This will inevitably cause slowdowns, especially if your ISP isn’t the fastest to begin with.

We’ve gone over some high-performance satellite VPN providers down below, and provide some useful info later on.

Satellite Internet and VPN technology don’t mix very well, especially if either provider is slow. Luckily, we’ve done the research for you – so here are the 5 best VPNs for satellite Internet.

NordVPN is an excellent VPN service, with 5,500+ blazing fast servers spread across 59+ countries. While it has the industry standard OpenVPN and IKEv2 protocols, we recommend their NordLynx option.

It’s based on the fast and lightweight WireGuard protocol, which should offer an improved VPN over satellite experience. Starlink satellite VPN users on Reddit have mentioned their download speeds aren’t much slower than normal. One user went from 122 Mbps to 107 Mbps while using NordVPN, with upload speeds staying pretty much the same.

The service keeps zero user logs and comes with an independent audit to prove it. Much of their network is P2P-enabled in case you want to torrent over satellite. NordVPN works amazingly with all popular streaming services (Netflix, Amazon Prime Video, and more). The provider even has a light browser extension if you prefer watching shows in your browser.

Otherwise, NordVPN comes with split tunneling (choose which apps use the VPN tunnel for better speeds). Their Threat Protection feature can block online ads, malware and phishing sites, as well as scan for malware on Windows and Linux. NordVPN has expert 24/7 live chat support, and comes with a 30-day money-back guarantee on all its plans.

Atlas VPN is one of the best satellite Internet VPNs if you’re on a budget. It comes with a free plan, and their affordable premium option lets you access 750+ servers in 40+ locations. Hughesnet users looking to test a VPN solution on their network should start with Atlas VPN. It’s the best (free) way to see if a VPN is a good idea for your connection.

Despite being one of the cheapest options on the market, Atlas VPN delivers surprisingly fast speeds. It also comes with strong military-grade encryption and a strict no-logs policy. Plus you get a trusty kill switch feature, split tunneling, and full support for downloading P2P files.

Atlas VPN is compatible with Windows, macOS, Linux, iOS and Android and there’s no limit on how many devices you can connect to one account! Useful for watching content on all your household gadgets, seeing as Atlas VPN supports a wide variety of streaming sites.

Sadly, only subscribers can access 24/7 live chat support. Although, you can still contact them by email and they respond pretty fast. There’s also a 30 day-back money guarantee in case you want to explore different satellite VPN options.

PrivateVPN is a well-balanced VPN great for all-around use. It’s a torrent-friendly VPN service that allows for unlimited P2P file sharing. Moreover, it even supports port forwarding on some servers. Thus, it provides a faster torrenting experience by allowing you to connect to more peers than usual.

Apart from torrenting, this VPN is suitable for general Internet use, as it comes with a good set of privacy and security features. These include IPv6 and DNS leak protection, and a kill switch called Application Guard. You can customize it to shut off traffic from individual apps in case of disconnects (e.g. torrent clients, social apps on public Wi-Fi, etc.). PrivateVPN also maintains a strict no-logs policy, making it an excellent choice for privacy-conscious satellite internet users.

Looking at its server base, this service offers over 200 units in 63 countries worldwide. Although speeds can vary between servers, with so many locations available. The VPN even works in highly restrictive countries such as China, Russia, and the UAE, although you’ll be limited to the L2TP/IPSec protocol.

As always, the provider features helpful 24/7 live chat, as well as a robust 30-day money-back plan for all subscriptions.

ExpressVPN has a lightning fast server network all around the world. You have over 3,000+ servers in 94 countries to choose from, which should help you reach higher speeds on satellite internet. Best of all, their entire network is P2P-friendly, making it a great option for torrenting.

It is a privacy-focused VPN service with a proven no-log policy. Aside from industry-standard VPN protocols like OpenVPN, L2TP/IPSec, and IKEv2, ExpressVPN features the proprietary Lightway protocol. We recommend this option for a speed boost while using satellite Internet.

There’s a split tunneling feature available on their Windows, macOS, Android, and router apps. As explained before, this feature lets you choose which traffic goes through the VPN tunnel. Let your ISP take care of non-essential traffic while you use your VPN for streaming, online payments, and more.

ExpressVPN has a 30-day money-back guarantee on all its plans, plus fast and friendly 24/7 live chat. It’s also one of two VPNs recommended by Starlink Hardware for satellite Internet, along with our final pick.

Private Internet Access is another great, secure, and affordable VPN. It keeps no logs, and has an impressive server network of over 28,000+ units in 80+ countries. Their network covers all 50 states in the US, so you won’t have trouble finding a fast local server in the region.

We recommend PIA for torrenting on satellite Internet due to their port forwarding and SOCKS5 proxy support. Their apps also include split tunneling if you still need a slight speed boost for other online activities.

You can pick IKEv2/IPSec (on iOS), or OpenVPN and the efficient WireGuard protocol on all apps. Furthermore, you can customize encryption levels if you decide to go with OpenVPN. Choose AES-128 for better speeds with lower (but still decent) security. Still, we recommend sticking with WireGuard for the best performance.

We also like that their PIA MACE feature can block ads, trackers, and malicious websites. And as mentioned, PIA is one of the best VPN options for Starlink satellite connections. Finally, the provider has a 30-day money-back guarantee on all subscriptions, plus 24/7 live chat.

Why Are VPNs and Satellite Internet Not Compatible?

There are several reasons why a satellite VPN connection may not be the best idea.

A satellite orbits the Earth at around 23000 miles above ground. Due to this large distance, there is an unavoidable delay (called a propagation delay). Depending on the satellite ISP, this can range from 550 ms to 1200 ms in an end-to-end connection.

The most popular satellite providers such as HughesNet or Viasat usually have a delay in the range of 550 – 850 ms. They compensate for this delay by using a technique called IP spoofing.

In layman’s terms, a satellite takes your IP address and uses it to connect to websites on your behalf. By using IP spoofing, the distance your data needs to travel is halved, resulting in better speeds. To use IP spoofing, satellite software needs to read the data from your connection. This is where we run into the first problem when using VPN over satellite.

Using a VPN would encrypt all your traffic and make the data unreadable. This encrypted connection can only be read by a VPN server. So, it causes your internet traffic to travel the full distance. This greatly increases latency and delay.

To maintain a stable VPN connection, you need low latency and high bandwidth. When using a VPN over satellite it’s possible to experience a loss from 40% to 70% in speed and throughput. A satellite connection is already slower than a wired one. So using a VPN with satellite internet might result in a huge drop in internet speed.

Low speeds and throughput causes another issue – frequent VPN connection drops. To keep a VPN connection you need a reliable broadband internet connection. Without it, you might find yourself constantly reconnecting to the VPN server.

Another aspect to think about is data usage. Most satellite internet plans come with a certain amount of data you can use per month. But using a VPN increases your data usage due to encryption. Depending on the VPN protocol used, this data overhead could eat up your internet plan data in days. Luckily VPNs themselves usually have no limit on data transfers.

Many satellite Internet providers recommend against using a VPN for the reasons described above. As such, if you experience any connectivity issues, it’s likely your ISP’s tech support will suggest turning off your VPN. Not exactly the answer anyone wants to hear.

Make sure to check your provider’s website for compatibility warnings between VPN and their satellite Internet services.

How to Use a VPN Over Satellite Connections

Here’s a step-by-step guide on how to use a VPN with satellite Internet:

Don’t be afraid to test out a few VPNs when you’re first starting out. Many VPN providers have money-back guarantees which may last up to 45 days. This is more than enough time to make sure everything works smoothly.

A lightweight version of a VPN app that is made specifically for browsers is called a VPN browser extension. They often use TLS encryption and generally reduce data usage (as they don’t cover all your network traffic). As an example, NordVPN has compatible extensions for Chrome, Firefox, and even Microsoft Edge.

As you can see, a VPN and satellite Internet technologies may not be entirely compatible. Lower speeds, higher latency, connection drops, increased data usage, lack of tech support – the problems keep piling up.

That said, it’s still worth a shot, especially if you use Starlink or other high-speed satellite ISPs. Take advantage of our recommended VPN providers’ money-back guarantee policies. 30 days should be more than enough to test out their apps.