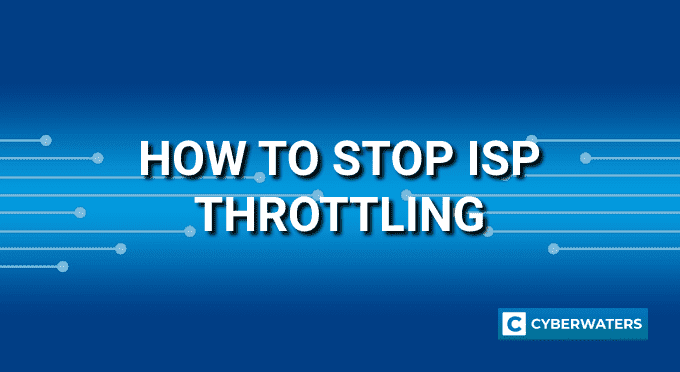 What is ISP Throttling?

ISP or bandwidth throttling is a strategy internet service providers use to limit the internet speed. The process targets users who access specific websites, stream videos, play online games, or use certain services.

In ISP throttling, an ISP separates and filters the internet traffic according to usage. For instance, unthrottled traffic allows web browsing and social media use at full speed. In contrast, throttled bandwidth when accessing streaming services may cause video lag and buffer.

Why does ISP Limit your Speed?

ISPs limit your bandwidth through data throttling to cut costs and save money. Providers like Cox Communications, Charter, and Comcast use diverse applications to throttle their clients’ internet connections. The limited bandwidth usage for specific websites and internet users enables ISPs to cut their networks’ data usage.

Another reason for ISP throttling is to manage data traffic during peak hours. Low bandwidth users are severely affected when several users use excess network traffic. ISPs, therefore, throttle the traffic of those heavy bandwidth users to lower the impact on users that have lower bandwidth.

ISP throttling is legal in most cases. Although the practice is not fair since it often results in lower network speeds.

Yet, ISP throttling remains to be controversial due to several reasons. Internet users may not want their service providers to have a lot of control over internet speeds as the ISP can slow down sites they don’t like.

In other cases, the ISP can limit the bandwidth of websites that may be related to their competitors.

How do Internet Providers Control Speed?

Internet service providers control the speed of their internet users in several ways. These include:

ISPs restrict the traffic linked to specific websites or applications. One of the approaches used in this method is reading the port number through which data packets enter the ISP’s network. If the port numbers match those that are commonly used in P2P applications like BitTorrent client, the ISPs limit the traffic relating to that activity.

However, some users attempt to get around these restrictions. They use a VPN that encrypts the traffic to prevent bandwidth throttling. Encrypted data packets can not be read by ISPs, thus preventing traffic shaping.

How to Tell if Your Internet is Being Throttled

How can you tell if your Internet is being throttled?

ISPs can reduce speed during specific periods when accessing certain websites, or services, or when ISP sees when you are torrenting. As it may not happen all the time it’s hard to know if your ISP reduces your bandwidth. Even though it is hard to tell if your internet is being throttled, there are a few things you can try.

Here’s how to tell if your Internet is being throttled:

Also, ISP can throttle internet speed at the protocol level. This method is almost impossible to detect when using an internet speed test. For example, a service provider could leave the overall bandwidth maximum unchanged. Yet, you are only able to stream videos at lower resolutions.

To determine ISP throttling you need to do many speeds tests over the period.

Measure speed at the end of the billing period

Most service providers slow down the internet speed towards the end of the month. During this time, most customers have already used a vast amount of allocated traffic data. Some consumers have observed painfully slow internet speeds towards the end of a billing period while they experience fast speeds at the start of the next billing cycle.
Some ISPs also slow down a connection if they detect heavy data usage. Mostly this happens when a user exceeds a monthly bandwidth cap. The ISP can detect sudden high data usage patterns and enforce bandwidth caps if they hit a big threshold.

You can run consistent speed tests in the course of the month and note down when the Internet is slower. First, run the speed test at the beginning of the month when the speeds are usually high. If you see consistent results of lower speeds during end months, it is clear the ISP is throttling internet speed and bandwidth usage.

Users can measure their internet connection speed over the day. If during peak hours your internet speed decreases this may indicate reduced bandwidth.

The downside of this method is that lower speeds at peak hours are not necessarily the result of ISP throttling. Because more users use the internet at the same time, the speeds can be naturally slower due to lack of processing power of some websites or services.

A virtual private network is a reputable and proven way of checking if an internet connection is throttled. ISPs often throttle certain types of content that result in high bandwidth usage. A VPN can prevent service providers from throttling the content since it masks a consumer’s activities and the IP address from the ISP.

As a result, the service provider may be unable to determine the websites or web services you use. The ISP is forced to treat all content equally. Once connected to a VPN you can run a speed test to determine if there are any changes.

If your speeds improve when using a VPN this means that your ISP is throttling your connections.

The following YouTube bitrates chart allows you to estimate the video bandwidth:

Then, compare the video bit rate of the resolution the video plays without buffering against an online internet speed test. If the video bandwidth is lower than the tested internet speed, it means the service provider has possibly throttled the internet connection.

Several tools can detect when service providers manipulate the bandwidth allocated to consumers. The Internet Health Test software is one of the solutions. You can use the tool to identify if there are any network bottlenecks.

Although the Internet Health Test can’t measure some protocols, such as P2P and video, it checks a connection’s performance across a vast backbone network. Such includes where services like YouTube, Hulu, and Netflix host their data.

The tool dashboard displays the results of various hosting services. Users can compare the upload and download speeds of different services. Those that register a drastic reduction in the connection speeds offer possible evidence that the ISP is engaging in internet throttling.

Why it is Hard to Detect ISP Throttling

Bandwidth throttling is more challenging to detect than other occurrences, such as social media shutdown or internet blackout. First, it is difficult to establish if an accidental or intentional disruption causes slow internet speeds. The case is hugely challenging in nations with fragile digital and IT infrastructure prone to frequent internet disruptions.

Also, throttling usually impacts specific platforms or parts of some platforms. For some users, the internet speeds may seem normal, while the same platforms are unusable on parts of the web.

Furthermore, due to the challenges involved in documenting the practice, it is challenging to tell the actual number of ISPs that throttle their internet connections.

Will a VPN Prevent Throttling?

Using a VPN is an effective way of stopping ISP throttling.

ISPs throttle internet speeds by separating the traffic into various lanes and restricting some of the connections. Ideally, the law prohibits service providers from throttling your traffic as long as a consumer pays for a specified internet speed, say 100 Mbps.

Using a VPN also prevents the ISP from viewing a user’s network activities. If a service provider cannot view the visited websites or the data from the user’s applications, it becomes impossible to separate the traffic.

A VPN wraps a consumer’s internet traffic in a robust and inaccessible encryption layer to accomplish several things. These include preventing the ISP from viewing the protocols, websites, and services a client uses. Ultimately, encrypting the network traffic to prevent the ISP from separating and throttling it.

How to Stop ISP Throttling

There are various ways to avoid ISP throttling:

A VPN is the best solution for preventing ISP throttling.

The solution remains to be the most viable way to prevent ISP throttling. Here’s how to stop internet throttling when using a VPN:

With the VPN hiding the user activities, ISPs can no longer throttle the internet connection. Consumers can, therefore, enjoy faster speeds devoid of network delays.

You can avoid the resulting bandwidth throttling by switching to a data plan with higher bandwidth. The method is not the best as it may cause additional expenses in data usage. Sometimes it’s more costly than using a VPN which would just do as good.

Different ISPs have various approaches for capping data usage depending on their respective terms and service level agreements. Some ISPs prove to be more notorious when throttling their clients’ internet connections than others. They cause slower speeds than usual. Therefore, it is always recommended to sign up with a new service provider with a higher data cap.

The move may not wholly resolve ISP throttling. But, it addresses concerns where ISPs throttle internet connections to extremely slow speeds.

Can ISPs Throttle a Connection Protected by a VPN?

Although a VPN encrypts, tunnels, and hides all data from an ISP, the provider can still see that you use a VPN.  Thus, internet providers can choose to throttle all traffic without separating it.

Alternatively, the ISP can decide to throttle all internet traffic flowing from the IP addresses known to belong to the VPN providers, but that’s rarely the case.

While it is possible to throttle a full VPN service, it would result in severe internet usage disruption. The ISP might also lose customers and experience reduced revenues, so VPN traffic is rarely throttled.

Other Benefits of a VPN

Other than using VPNs to prevent ISP throttling, businesses can use the services for the following benefits:

The most obvious reason for using a VPN is to realize strengthened security. The encrypted network tunnel allows employees to share data securely. This capability facilitates remote working.

Businesses use VPNs to communicate essential information, such as passwords, business data, personal details, and IP addresses. The VPNs’ encryption protects such data from unauthorized access and hackers.

Most people regard internet anonymity to be an essential tenet or problem in equal measure. An undebatable fact is that an exposed identity can cause the owner’s exploitation in various ways. Besides, there are some activities that internet users wouldn’t want to be traced back to them. The use of a VPN can enable individuals to access websites and applications and retain their anonymity. A VPN is better than web proxies or incognito mode in web browsers, which does little to hide a user identity.

Given the numerous benefits of using a VPN, including the need to prevent ISP throttling, it should be a priority for all internet users. Fortunately, most VPN service providers today offer premium services at affordable prices. Most come with mouth-watering features. A good VPN service can enhance network performance and security.

The best way to stop IPs throttling is to use a VPN. It will encrypt your internet traffic making it impossible to read for an ISP. Since VPN hides your browsing activities ISP will not be able to reduce bandwidth. If you want to increase your internet speeds and enjoy lag-free connections you need a good VPN.

Here are some of the best VPNs to stop ISP throttling: