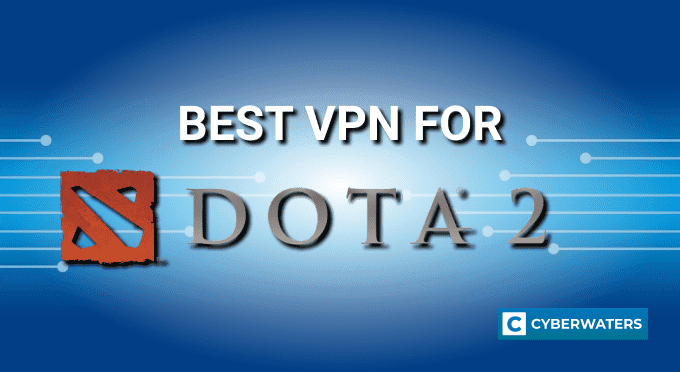 Dota 2 is a very fast-paced game, and you have to make quick decisions if you want to beat other players. Unfortunately, sometimes the game’s servers or your network connection don’t want to cooperate with you. Slow network speeds, lag, and ping can quickly ruin a Dota 2 session. However, you can avoid all of these issues simply by using a VPN. It will help reduce your latency, lower your ping and provide a smoother gaming experience overall.

Here are the top VPNs for Dota 2:

Apart from gaming, a Dota 2 VPN can be your helpful ally in many fields. If you’re worried about your online security or fear getting DDoSed, a VPN can protect you. It can also assist you in accessing remote regions and servers. But, to enjoy all of these advantages, you must pick a proven and capable VPN service. We’ll discuss all of these aspects and cover everything you need to know about playing Dota 2 with a VPN.

Why You Need a VPN for Dota 2

The most significant reason why Dota 2 players use a VPN is that it gives them an edge over their competitors. VPNs can tackle your high ping or varying network speeds and provide you with steadier and more enjoyable gaming. Not only this, the ability to switch between VPN means that you can handpick any global server you want to play in.

In line with this, a VPN is also the top solution if you’re looking for ways to play Dota 2 on other servers without lag. It can provide you with access to any Dota 2 server across the globe and ensure stable and fast speeds. If you’re primarily looking for this characteristic in your VPN, focus on the service’s speed as the main deciding factor.

Lastly, playing Dota 2 with a VPN comes with plenty of security and online privacy benefits. A VPN works by masking your actual IP address and routing it through its encrypted servers. In other words, your real IP address will never get compromised when playing online. This means no danger of DDoS attacks, IP or DNS leaks. What’s more, if you pick a VPN with a no-logs policy, none of your online activities would be traceable to you.

Besides these benefits, gaming with a VPN is widely a very advantageous practice. We’ve covered this topic more extensively in our general best VPNs for Gaming page. Make sure to go through it if you want to learn more in-depth information.

Will You Get Banned for Using a VPN for Dota 2?

No, you won’t get banned for using a VPN for Dota 2. This is if you only use it to improve your network’s performance and enhance your gaming experience. Since Dota 2 is Valve’s product, you can get it on Steam.

This means that you also have to watch not to break any of Steam’s VPN guidelines. Primarily, you’re not allowed to use the VPN to get discounts on add-ons on other games that might be more expensive in your country than in other regions. These are bannable offenses from Steam’s viewpoint.

NordVPN deservedly takes the top spot as the best gaming VPN for Dota 2. This VPN has over 5,400 servers in 59 countries worldwide. Its servers are powerful enough to unblock any gaming server globally, not just the Dota 2 ones. All servers are entirely RAM-based, meaning that they are safe, secure, and very private.

NordVPN has a lineup of very robust security features. These include DNS leak protection, DDoS protection, and CyberSec. It also comes with a built-in kill switch. Despite being feature-packed, NordVPN is a very light and streamlined service. It employs the in-house NordLynx protocol.

The service itself is based in Panama, far from any international surveillance organization. What’s more, it has a rigorous zero-logs policy and is audited regularly. You can take advantage of world-class apps for all major device platforms and operating systems you want to play games on.

With over 3,200 servers, all equipped with private DNS, Surfshark is undoubtedly one of the top Dota 2 VPNs around. It provides above-average server speeds and is loaded with terrific gaming features. Some of the best ones include  Camouflage Mode (VPN obfuscation) and an automatic kill switch. It has even developed an in-house protocol, called Shadowsocks, designed to work in heavily censored regions.

Surfshark is especially advantageous for gamers who highly value their privacy. This is because this service doesn’t log any user activity. Moreover, you can pay for your Surfshark subscription with multiple different cryptocurrencies. All of this allows for entirely anonymous online gaming. Surfshark also offers outstanding cross-platform support. You can set it up on a number of gaming devices or even install it on your home router.

Atlas VPN has a lot to offer when we talk about improving your gaming experience. If you’re tired of constantly experiencing high ping and latency, Atlas VPN is your best choice, offering 750 optimized servers. Online security is another crucial aspect when gaming. Atlas VPN can help you with this, too, as it provides a solid no-logs policy, which means that it does not collect users’ activities, DNS queries, or other private data. It also provides an extra shield of protection against DDoS attacks and throttling.

Atlas VPN has other additional features which make it the best VPN for Dota 2. Unlimited simultaneous connections will allow you to connect the VPN to any gadget you want. Atlas is compatible with all popular operating systems such as iOS, Android, macOS, and Windows.

Being one of the most budget-friendly options, Atlas VPN has a lot to offer. A 30-day money-back guarantee, 24/7 customer support, and a lot more, so it is worth a try.

There are certainly VPNs on our list that can offer better security or network speeds than PrivateVPN. But, PrivateVPN’s strength lies in its well-balanced characteristics. This is because this VPN service is one of the best all-around Dota 2 VPNs you can get. With over 200 worldwide servers across 63 countries, PrivateVPN offers you a massive selection of IP addresses you can play Dota 2 through. Moreover, it doesn’t put any data bandwidth caps or limitations on server switching.

The service has a 100% zero-logs policy and allows you to connect up to six devices simultaneously. It even has a very convenient app layout, making it easy to navigate its client even if you’ve never used a VPN before. You can quickly find the best Dota 2 servers depending on your locations and where you want to play.

ExpressVPN’s server base is regarded as one of the highest-grade in the industry. This VPN currently provides over 3,000 servers in 260 locations across 94 countries worldwide. All of its servers support the outstanding Lightway protocol, which is superb for gaming. It’s also one of only a handful of VPNs that work in China and several other countries with heavily censored countries.

Looking at its subscription prices, it’s safe to say that ExpressVPN isn’t the cheapest service around. But, if you’re in for a top-speed and high-performing VPN, ExpressVPN is an excellent choice. It’s a first-rate performer packed with great features. Some of the best ones include DNS leak and DDoS protection and the NetworkLock feature.

How to reduce ping in the Dota 2 SEA server?

The best way to reduce ping in the Dota 2 SEA (South East Asia) server is to use a VPN when gaming. You’ll need to connect to the server closest to you that still has access to SEA servers. Key things to watch for are the VPN’s proximity to the SEA server, your location, and the VPN’s performance capabilities.

No, we advise you to avoid using a free VPN for Dota 2. A free gaming VPN for Dota 2 can’t perform the same as a premium one. Free VPNs often have overcrowded servers and can’t support fast connections. Plus, from a security standpoint, free VPNs come with many potential threats you shouldn’t expose yourself to.

Can I play Dota 2 in China with a VPN?

You can play Dota 2 in China with a VPN. To do this, you need a robust and reliable VPN that works in China’s heavily restricted online environment. That said, you should make sure to know all of the laws and regulations before using a VPN. This is because China doesn’t have a very favorable stance towards VPNs use.

As we’ve mentioned before, there are many reasons why you should consider using a VPN for Dota 2. It can help lower your lag and ping and even increase your network speed in some situations. Furthermore, it will keep you safe from any malicious players trying to DDoS or hack you.

The five VPNs we’ve examined on this page are all very adept in providing you with a top-quality Dota 2 gaming experience. If you’re not sure which service best fits your needs, we recommend NordVPN. It’s the VPN that covers all of your online needs and an excellent choice for gaming. Plus, you can take advantage of a customer-friendly 30-day money-back guarantee.