List of VPN Port Numbers that VPN Companies Use (2023 Update) 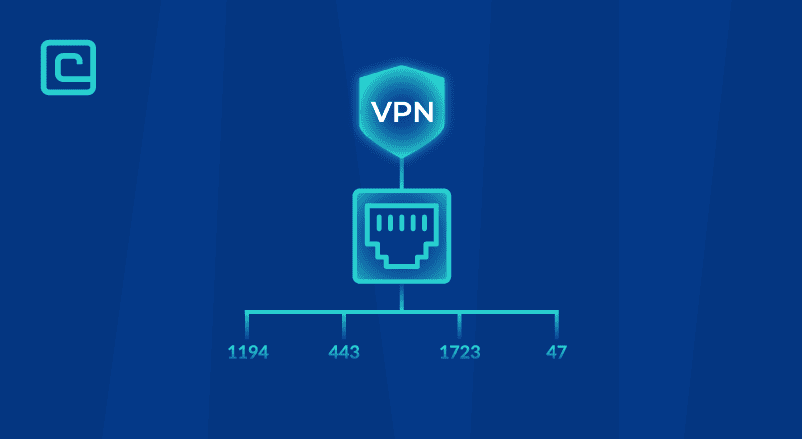 A VPN port is a virtual point used by a VPN connection to send and receive traffic. When you surf the web using a VPN, your browser sends your web requests and receives the responses (traffic) via a VPN port. This optimizes tunneling and encryption, while also ensuring that your traffic reaches the intended destination.

VPN ports are a part of the long list of transport protocol port numbers used in networking that ensure the movement of different types of data on the internet. However, VPN ports differ from regular networking ports in one major way. They are designed to handle VPN traffic for faster and more effective communication.

Check out VPNs with Port Forwarding!

What Ports Do VPNs Use? – List of VPN Port Numbers as Per VPN Protocols

TCP, UDP, ESP, and GRE are all transport protocols through which data packets are sent and received. As you can see, some port numbers are shared between two or more services as they communicate over the same transport protocol.

For example, both OpenVPN and SSTP use VPN port number 443 for VPN connections. As you can guess, both travel over the TCP protocol and offer similar VPN features such as AES encryption.

Similarly, port 500 is best known for mobility (which translates to faster connections) but the trade-off is with security. This is one reason why L2TP and IKEv2 are preferred for faster VPN connections and SSTP for more secure ones.

With this newfound information, the question that then comes up is: how is this VPN port information critical to you?

There are various uses of this information such as router or firewall configuration, manual server setup, or P2P tracker setup. But before we get into the significance of VPN ports for general users, let’s understand what they are.

What Is A VPN Port?

A VPN port is like any other networking port that allows the transmission and reception of data packets over a network. In the VPN context, that network is the world wide web or the internet.

When you switch on your VPN, it creates a virtual private network using a VPN protocol configured by the provider. Let’s assume it’s the OpenVPN protocol. Since the OpenVPN service over TCP has been assigned the 443 VPN port number by the IANA, all your web traffic will travel via this port. This is one way how your traffic is hidden from, say, your ISP and government. This is because your regular traffic goes through other TCP ports.

Much like how security and tunneling features differ from protocol to protocol, it does for VPN ports too. VPN port numbers help software identify where to send data, making networking faster and more efficient.

It is also worth noting that VPN protocols and port numbers are primarily used to distinguish between different VPN architectures that run over transport protocols such as TCP, GRE, and UDP.

In most cases, as a VPN user, you don’t have to worry about VPN ports. It’s automatically selected and configured by your VPN provider. If you’re using a premium service like NordVPN or Atlas VPN, you are guaranteed the best experience. However, there may come a situation when this port information will come in handy.

A Note on How Port Numbers are Assigned

As I mentioned above, VPN ports are assigned by the Internet Assigned Numbers Authority (IANA), a global standards organization that also manages IP address allocation in the domain name system (DNS). VPN providers are free to choose their protocols, which also influences the VPN ports available for you as a user.

The IANA maintains a regularly updated list of all TP port numbers currently in use. These numbers are categorized into three ranges, namely system ports, user ports, and dynamic/private ports.

As you can see, VPN ports are scattered across all three ranges, with WireGuard being assigned the farthest number from zero (among the lot). This is because all port numbers (except dynamic) are assigned on a first-come, first-served basis.

Why is VPN Port Information Important to Users?

You may need to manually choose port numbers for special use cases such as:

This is to improve your connection speed while foregoing some of the security features of your VPN connection. This manual action is also known as port forwarding because you are essentially opening up a port to allow or forward an inbound connection into your network.

Let’s look at an example of how port forwarding improves seeding and peering while torrenting.

Assume you are seeding a torrent file that you recently downloaded. Several torrent users may try to download parts of this torrent file from you via their BitTorrent client.

However, if both you and a random user have an active Network Address Translation (NAT) firewall, the connection will fall through. This is more often the case these days with torrent users actively trying to safeguard their devices and data with firewall, VPN, and anti-virus software.

It’s not your fault that you want to both seed your torrents for the community and safeguard yourself from the perils of the web. Thankfully, that’s where port forwarding helps.

If you choose a VPN (like Private Internet Access) that offers port forwarding functionality, you can safely seed your torrents without having to worry much about security. Just do the following:

In uTorrent, this is how the port forwarding settings will look:

How to Choose VPN Ports?

In most cases, you don’t even need to choose a VPN port. That job is for your VPN provider.

For example, when you switch on NordVPN and choose OpenVPN, it automatically uses ports 443/1194 to tunnel your encrypted traffic safely. The provider automatically takes care of port selection once you decide which protocol you want to use. (443/1194 combination is one of the best ports for VPN at the moment.)

Therefore, the only way for general users like you and me to choose VPN ports is to actually choose the VPN protocol. As we have discussed before, you should stick to OpenVPN, WireGuard, or SSTP for the best VPN protection. All other protocols are outdated, and therefore, do not secure your connection.

Some VPNs like PrivateVPN offer port forwarding functionality but you should still use it sparingly.

How to know what VPN port your VPN software is using?

Port forwarding is a process where web communication moves from one port to another for more efficiency and speed. In other words, it forwards internet data to a more fitting or relevant port if it enhances the connection’s speed and efficiency. It also allows easy connections to more devices between two networks; for example, between your smart TV and the internet via your Wi-Fi router.

There are several VPNs with port forwarding like Private Internet Access and Private VPN. The feature is useful for torrenting and P2P connections, where it can move data between ports for faster downloads and seeding.

It is worth noting that port forwarding can make your connection vulnerable as it requires the VPN software to have multiple VPN ports open. It also bypasses the NAT firewall to an extent, which can be detrimental to your networking needs. These can make you and your data more prone to cyberattacks.

Which VPN Ports Should You Avoid?

As of August 2022, 65,000+ transport protocol ports exist. While the number of VPN ports is only a handful out of these, there still are some bad ports that you should avoid.

I told you that you are mostly never required to choose a VPN port/protocol, but if a situation demands it, it’s better to stay clear of the following bad VPN ports:

Why should you avoid these ports? Because they are simply known to be vulnerable to cyberattacks such as hacking, invasion, and traffic analysis. The ports have been reported to have vulnerabilities that hackers have exploited in the past. As a result, your data and device become more prone to cyberattacks.

In addition to the above unsafe VPN ports, the PPTP ports from 1723 through 1729 are also considered unsafe because they require manual firewall and security setup. The same applies to UDP 500, although it is not as unsafe as others on the list.

Online privacy is not where you should cut corners. It is, therefore, wise to not tinker with VPN port numbers unless you absolutely know what you’re doing and why. If you’re a general VPN user that believes in plug-and-play, we recommend not to worry about VPN port numbers.

If you’re a professional, it’s always better to put security over speed and efficiency. You may be opening up a vulnerable port only for a few minutes, but that window may be enough for a cyberattack. Want to know which VPNs offer the highest number of VPN ports? Check out our detailed buying guide.