How to Torrent in Germany (Safely and Anonymously) 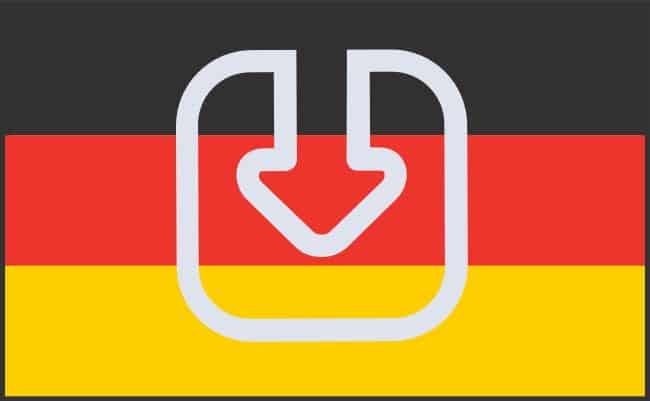 Downloading torrents in Germany is pretty risky – if you’re caught, you might have to pay a pretty big fine.

In this guide, we’ll show you how you can be caught torrenting in Germany and what to do to avoid that. Also, we’ll answer some FAQs.

How Can You Be Caught Downloading Torrents in Germany?

German lawyers and copyright agencies check the list of torrent peers in a torrent client. There, they can see the IP addresses of everyone who uploads and downloads a torrent.

Here’s a screenshot of the list of peers in qBittorrent to give you an idea of how things look:

Once they have your IP, the agencies and lawyers use it to find your ISP. A simple IP lookup tool is all that’s needed to tell them which ISP the IP belongs to. Then, they send your ISP letters asking for your personal details. The law authorizes them to do that, so your ISP will almost always comply with their requests.

Once that happens, they’ll send you a cease and desist letter with an invoice for the amount you have to pay. In Germany, torrent cease and desist letters are called “Abmahnung,” or “Unterlassungserklärung.” They usually say you need to pay compensation and reimbursement fees. On average, the costs amount to €1,000 (around $1,176) per file.

German ISPs can also monitor your traffic to see if you’re downloading German torrents. They’ll check your DNS queries to see if you’re connecting to torrent sites. Also, they’ll monitor your traffic to spot signs of torrenting – like simultaneous upload streams and high bandwidth usage. And they might also use third-party torrent monitoring tools. We saw German torrent users mention Torrent-Logger and Hash on Reddit.

If ISPs catch you torrenting in Germany, they might threaten to cancel your service if you don’t stop. Alternatively, they might throttle your bandwidth once you consume too much data. German Redditors said Vodafone does that often.

What’s the Best Way to Download Torrents in Germany?

Downloading torrents in Germany is very risky. There are multiple things you can do to stay safe while torrenting. We covered them in this article. But we believe one tip deserves to be discussed in-depth here – using a VPN.

And by “hide your IP,” we mean that VPNs route your traffic through a VPN server that sits between you and the Internet. Any site you access or anyone you interact with will only see the VPN’s IP address. So, if copyright agencies and lawyers check a torrent swarm’s list of peers, they won’t see your real IP address – only the VPN’s IP. So, they won’t be able to locate your ISP anymore.

IMPORTANT: Almost all VPNs secure your traffic, but that’s not enough to torrent safely in Germany. You need a VPN that has a no-logs policy. The service shouldn’t monitor the sites you visit and the files you download, and log your IP address. If the VPN does that, lawyers and copyright agencies could try to legally force them to hand over your data.

What’s the Best VPN for Torrenting in Germany?

There are dozens of VPNs on the market, but not all of them are good for torrenting. We found the best ten P2P VPNs and tested them in this guide, so feel free to check it out. But if you’re in a hurry, we recommend using NordVPN for torrenting in Germany.

This VPN is our #1 pick because it offers excellent torrenting support. It allows P2P traffic on 5,000+ servers located in most parts of the world. So, it’s very easy to find a server close to your location to get fast speeds. NordVPN also works with the most popular torrent clients – like qBittorrent, uTorrent, and Vuze.

What’s more, this provider has very fast download speeds – mostly thanks to its NordLynx implementation. Basically, it built its own protocol based around WireGuard technology, which is a very fast protocol.

NordVPN also offers excellent security. It has a no-logs policy that has been audited twice and a kill switch that works really well. Also, its servers are RAM-only – meaning data is saved only to the RAM memory. That way, every reboot wipes all data. So there’s no way for the authorities to force this provider to share user data.

Here are other things that make this service a great VPN for torrenting in Germany:

Downloading Torrents in Germany with a VPN (Useful Tips)

Using a VPN for torrenting in Germany is a great way to stay safe. Still, things can go wrong if you’re not careful. Here’s what you should do to get the best torrenting experience:

Not all VPNs allow torrenting on all their servers. Many of them have dedicated P2P servers that you need to use. It’s usually easy to find them. They’re either in a separate server category or you can find them by using keywords like “P2P’ or “torrenting” in the search field.

The kill switch is an essential feature that disconnects you from the Internet if your VPN connection drops. That way, your data isn’t accidentally exposed until the VPN reconnects. Without a kill switch, your IP might become visible in the peer list. Even if it’s only for a few seconds, it’s enough to put you at risk.

Most VPNs enable the kill switch by default, but it doesn’t hurt to check before torrenting.

But what if you don’t want to lose all Internet access?

Well, some VPNs have app-based kill switches. That means you can choose which apps can’t use the Internet if the VPN is disconnected. If you use NordVPN for torrenting in Germany, you’ll get that feature.

VPNs can leak your data if they experience DNS, IPv6, and WebRTC leaks. While you can manually prevent that on your end, some VPNs handle everything for you by offering in-app leak protection.

So make sure you enable all leak protection settings before you start torrenting in Germany. If you can’t find the settings and the VPN says it has leak protection, it means it’s enabled by default. NordVPN, for example, integrates DNS, IPv6, and WebRTC leak protection into its servers and doesn’t have any in-app options.

Even if a VPN has good leak protection, it’s best to run a test or two to make sure it’s really working. We recommend using the ipleak.net tool for this. Here’s what you need to do:

If the VPN suffers leaks and leak protection is enabled, contact support. See if you need to take other precautions to avoid leaks.

We checked Reddit and Quora to see what questions people have about Germany’s torrenting laws and VPN torrenting in Germany. We answered the most common questions below.

Is Torrenting Illegal in Germany?

Torrenting is legal in Germany, but it’s against the law to torrent copyrighted content. If you do that, you’ll receive a cease and desist letter and be told you have to pay a fine that’s around €1,000.

If you don’t want to pay right away, you could use a mediation service or lawyer to reduce the fine. But you’ll still have to pay for the mediation and lawyer. Alternatively, you can ignore the letter and hope for the best – sometimes, law firms are too busy to keep track of everyone they send letters to. Of course, there’s no guarantee you won’t be one of the unlucky few who they don’t ignore.

Overall, the best solution is to use a VPN for torrenting in Germany to avoid getting a fine.

Is Using VPNs Legal in Germany?

Yes, VPNs are legal in Germany. There are no laws that state you can’t use a VPN. It’s only illegal to use a VPN to engage in hardcore criminal activities. That includes things like smuggling weapons, child pornography, drug trafficking, and cyber attacks.

Will You Be Fined If Someone Torrents over Your Network?

That used to happen before 2017, but not anymore. Now, you’re not responsible for what guests do on your network. You can be cleared of all charges and the real culprit will be at fault. You’re only responsible for securing it so that random people don’t use it to download copyrighted content.

How to Torrent in Germany with a VPN

People often think that VPNs are complicated tools. But they’re actually very simple to use. Here’s how to use a VPN for torrenting in Germany in 4 easy steps:

Is Torrenting in Germany with a Free VPN Possible?

Yes, you can download torrents in Germany with a free VPN, but we don’t recommend it. Free VPNs are not safe. They don’t have important security features like kill switches and leak protection. And they usually keep logs, so you never know when they might hand your data over to copyright agencies.

Besides that, free VPNs have other annoying issues:

It’s much better to use a paid VPN for torrenting in Germany. Many of them have cheap long-term plans. And they also have 30-day money-back guarantees, so you actually get to test them for 30 days “for free.”

Scammers might try to take advantage of people’s fears of getting a cease and desist letter. Here’s how you know the letter is fake: