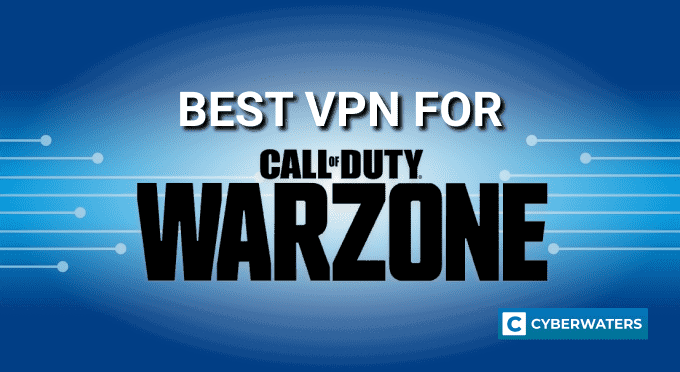 Released in March of 2020, COD Warzone recorded 60 million downloads in the first two months. It’s a free-to-play battle royale game that pits up to 150 or more players in a multiplayer combat scenario. As a result, it attracts many players from all over the globe. Being such a massively extensive game, it comes with its own set of issues.

COD Warzone comes with heavy geo-restrictions preventing you from playing against players from different regions. Aside from this, as one of today’s most prevalent shooter games, it also attracts malicious people. There are many cases of COD-related DDoS attacks and security breaches.

The best way to avoid these issues is to use a VPN. The most important criteria a COD Warzone VPN must meet include fast and reliable servers, the ability to bypass geo-blocks and avoid ISP throttling. On top of this, the VPN should offer strong encryption to safeguard your privacy and protect you from DDoS attacks.

Here are the best VPNs for COD Warzone:

Why You Should Use a VPN for COD Warzone

The main reason why you should use a VPN for COD Warzone is if you want to reduce your network’s latency and decrease in-game lag. Another significant reason why many COD players often use VPNs is that they allow them to bypass territorial restrictions limiting their choice of potential opponents. A VPN lets you change regions within seconds and play against players from any part of the world.

Not only this, but since you’re able to go around geo-blocks,  you can access other banned or heavily edited games in case you live in a country with strong censorship laws. Even if you don’t reside in an authoritarian country, using a VPN is a great way to access geo-blocked DLC or content from other regions.

Will You Get Banned for Using VPN with Call Of Duty?

No, according to the COD Warzone Security and Enforcement Policy, using a VPN for COD is not a bannable offense. As long as you’re utilizing the VPN to reduce lag and ping and not take advantage of any loopholes, you won’t get banned. There have been some player complaints that the game’s anti-cheat system is flagging VPN use as third-party cheat software, but these are minor outliers.

However, we should note that there are some considerations to keep in mind. Most notably, if you’re not playing on a dedicated VPN IP address, it means that other COD players may also use the same server as you do. This isn’t an issue on its own, but if someone else cheats in the game while on the same IP, you could also get flagged as a suspicious player.

Can VPN Lower Your Ping?

Yes, a VPN can help lower your ping. This is because a VPN will ensure that all information flows more freely and directly than it typically does with your ISP packet. With that said, we should mention that finding a suitable server to lower your ping is often a trial and error process.

Results can vary significantly between servers, and sometimes you won’t notice any change in ping. The key to lowering your ping with a VPN is to put in the time and find the right server based on your real physical location.

Can You Use a VPN for COD Mobile?

Yes, aside from using your VPN for Warzone, you can also use it to enjoy Call of Duty: Mobile on your Android or iOS device. Each of the five VPNs we feature on this page offers dedicated mobile clients for the two popular software platforms. Consequently, our top pick for COD Warzone is also the best VPN for COD: Mobile.

However, it’s imperative to mention that, unlike its desktop counterpart, COD: Mobile does list VPN use as a bannable offense. In this regard, you have to be very careful if you plan on using a VPN for this game. The best way to avoid getting banned from COD: Mobile is to use a VPN that offers dedicated IP servers. They will help prevent the game’s servers from seeing that you’re connecting through a VPN and you will look like browsing from a home Wi-Fi. However, the big downside is that it costs extra.

With so many VPNs on the market, it’s worth mentioning that not every VPN works well for gaming. What’s more, most services will worsen your ping and make your sessions even more unstable. For these reasons, it’s crucial to pick a VPN that’s proven to be suitable for gaming. Here are the five best VPNs for COD Warzone:

NordVPN is our top pick for the best VPN for COD Warzone and gaming in general. The reason for this is simple. It comes with all of the bells and whistles you need for a seamless gaming experience. Strong privacy security settings, servers capable of unblocking any region, and a built-in kill switch are just some of the many features that make NordVPN our top choice.

The service has a vast network of over 5500 servers spread across 59 countries around the globe. Best of all, NordVPN comes at very affordable subscription rates, especially when you consider everything their service includes. You can also take advantage of their 30-day money-back guarantee if you stop playing COD Warzone and change your mind about using a VPN.

PrivateVPN might not be as widely known as some of the other providers on this page, but it can hold its ground with even the best in the industry. What makes this VPN service one of the best choices for gamers is that it has a massive global footprint covering over 220 locations in 63 countries worldwide. With PrivateVPN, you can always count on instant COD Warzone access to all regions.

Equally important, PrivateVPN is one of the safest VPNs around, as all of its servers are secured with strong AES 256-bit encryption and provide both DNS and IPv6 leak protection. You can also count on port-forwarding to conveniently open ports whenever you’re unable to play multiplayer games. Lastly, in case of any connection drops, PrivateVPN ensures your privacy and safety with an automatic kill switch.

Surfshark offers a very balanced service that excels on all fronts. It’s fast enough for gaming and provides 3200+ servers in 65 countries, ideal for gamers and those who like to stream content from various regions. This service allows you to connect an unlimited number of devices simultaneously, so you can share your account with friends and game all on the same server.

Moreover, Surfshark is one of the most robust VPNs in terms of security and privacy. You’ll be completely protected from DDoS attacks and any other privacy instructions when playing COD Warzone with Surfshark.

ExpressVPN offers some of the fastest server speeds around. That said, their offer doesn’t only excel in quality but also provides excellent value quantity-wise. With 160 server locations in 94 countries, you’ll have no shortage of options when playing COD Warzone.

Besides being one of the fastest VPNs on the market, ExpressVPN is also very powerful in unblocking geo-blocks from any site, platform, or game. Not only this but, it also supports a strong 256-bit AES encryption with perfect forward secrecy and DNS protection. This means that you don’t have to worry about any data leaks or DDoS attacks when gaming with ExpressVPN.

Private Internet Access excels in one particular aspect that’s crucial for gaming – super-fast connection speeds. Based in the US, this VPN service is full of advanced features you can use to customize your gaming experience and network connection to make it even more streamlined.

Although Private Internet Access isn’t always as stable as our top two picks, it’s still one of the best VPN services you can find on the market. Its massive network of over 25,000 servers in 77 countries is its most significant advantage compared to the rest of the competition.

If you want to enjoy a safe, unrestricted, and lag-free COD Warzone experience, installing a VPN is the best way to go about it. Moreover, if you take your success in the game very seriously, a VPN can help give you the extra edge by reducing ping and offering you a more stable connection.

Each of the five COD VPNs we’ve gone over on this page is more than capable of providing you with all of the essential features we highlighted above. Simply pick a service that you find to be the best for you and enjoy playing COD and any other online game completely worry free!